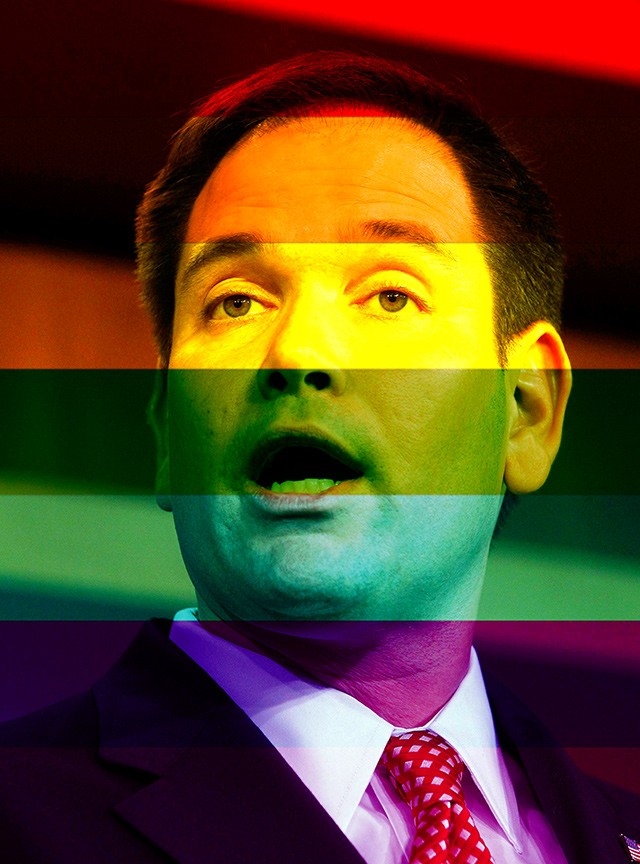 Try as we might, we’ve yet to be able to muster more than a squinty-blur of possible Christian Bale (via Patrick Bateman) self-immolating attraction to Sen. Marco Rubio, though, given his recent flamboyant flare-ups in the face of the gay question, maybe we ought to give ol’ eyes-too-wide a second glance? He doth protest a bit too much, after all.

On June 13, Rubio double-fisted the queer issue, providing us two new reasons to hate – or be playfully suspicious of – him. We all know that li’l Marco has been hopscotching his own Latino constituency over the immigration reform bill that he’s both writing and avoiding. At last count, 71 percent of Floridians support the “path to citizenship” – which is more like a 13-year marathon – that Rubio can’t decide whether he supports or not. Well, on a Thursday radio interview, Rubio did make clear that there was one thing he didn’t support absolutely, and that was bringing the gays into the equation.

Seems that Democratic Vermont Sen. Patrick Leahy had introduced an amendment to the bill that would extend protections to same-sex married immigrants, in response to which Rubio told an interviewer: “If this bill has in it something that gives gay couples immigration rights and so forth, it kills the bill. I’m gone, I’m off it, and I’ve said that repeatedly,” he stomped his feet, according to The Hill. Poor dear.

As if he weren’t through exhibiting his apparent heterosexuality, Rubio continued his pink spiral on the same day at a Faith and Freedom Forum. There, when buttonholed by Think Progress on matters involving the Employment Non-Discrimination Act, Rubio soft-shoed some nonsense about not being a “bigot” before being a bigot and saying, “By and large, I think all Americans should be protected, but I’m not for any special protections based on orientation.”

That’s cool, Marco. We don’t like you either. Call us, OK?