THOMAS SCOTT Check your walls, kids, for fliers and posters from shows gone by here in Orlando, and you're likely to find one of the distinctive creations of graphic designer Thomas Scott. And if that doesn't prove fruitful, recall the logos for Yab Yum, Harold & Maude's, Kit Kat Club and the Globe – those are all Scott's inventions. The rabid music man has been at it since the 1980s; as word of his talent has spread beyond the peninsula, he's become sought after by the likes of Bright Eyes, Pretty Girls Make Graves and other national acts. Scott is featured in The Art of Rock: Posters From Presley to Punk and Art of Modern Rock: The Poster Explosion. "Scott himself is a maniacal collector of indie rock music," says Tom Hope, president of the local chapter of the American Institute of Graphic Arts (AIGA). "He really gets into the music and wants the image to resonate with the fans. So the work will often refer to a lyric or a song title or an aesthetic." Scott's a familiar fixture at the clubs, where he often sells his art, but he will speak at DMAC, at the invitation of AIGA, about why he does what he does. "It's a kind of an anonymous art," says Hope."It's a street art; it's a pop art. It's not as at home in galleries as it is in gutters. It's not always rough, but it frequently is; and there is a beauty to it, to the composition." (7 p.m. at DMAC; orlando.aiga.org; $15) 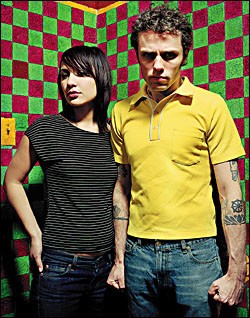 MOMMY AND DADDY They look like a trash-rock duo, but they're hyped like a New York electroclash trainwreck … and they're sorta both. We haven't decided if we like them, but the fact that Pitchfork hates them makes us at least want to like them. Forgive them their influences, for they know not what they do, and just enjoy the show. (with S.O.A.P.; 10 p.m. at Will's Pub; 407-898-5070; $7)

MASHLIN If you're not at one of these two CD-release shows, don't worry about it. In about a year or so, you'll be saying that you were. Although Mashlin's new CD (Pushing Through the Seasons) came out a couple of weeks ago, these two shows mark the beginning of some very big things for this band. They're currently signed to a fine and upstanding local label called One Eleven Records, which, thanks to releases by the likes of Rory, The Spill Canvas and This Day & Age, has gotten quite a national reputation among punk kids who are too grown-up for emo and too smart for hardcore. (Yes, the dude who owns it used to be in LFO, but the lineup speaks for itself.) But the successes the label has had so far will likely be completely eclipsed by what happens with Mashlin; although this local quartet shares the idealism of their labelmates, their sound is far more song-based and, dare we say it, majestic. Unafraid to use epic guitar passages to back up songs that are dynamic, complex and multifaceted, Mashlin make the sort of engaging and thoughtful rock that we thought only Muse and Porcupine Tree were dishing out these days. Mashlin isn't nearly as self-indulgent as either of those bands, but it's clear that one day they want to be, and that's just fine. (5 p.m. all-ages show with Rory, History; 9 p.m. 18+ show with Plain Jane Automobile, The Curve; both shows at The Social; 407-246-1419; $8 each)

MARKY RAMONE & FRIENDS Marky didn't play drums on the very best Ramones records, but he did play on Road to Ruin, which was one of the last of the prime-era Ramones LPs. And he played drums for the band for almost as long as Dee Dee played bass, so any quibbles about how "he wasn't an original member so he shouldn't be trotting around the country playing Ramones songs with his own stuff" is just a bunch of crap. The Ramones were Johnny and Joey anyway, and they're both dead, so any breathing Ramone (except Richie, who was a total dick) is entitled – rather, obligated – to bring this music to the masses. It ain't the real deal, but it wasn't the real deal for the last decade and a half the band was together, so what's the problem? Plus, Marky can actually write a song that doesn't sound like a Ramones song. With those mixed in, it should be a great set. (7:30 p.m. at Hard Rock Live; 407-351-5483; $15, $20)

EXOTIC BIRD SOCIETY OF AMERICA EXPO The promoters call it "the largest shopping mall for just bird related items in Florida." And you can make all the for-the-birds comments you can come up with, but it won't deter the passions of people who love their feathered friends and can't wait to see what's new in perches and entertainment systems. In addition to the 101 vendors, events will include a seminar by Jean "The African Queen" Pattison and her work with breeds only from the Dark Continent; and lighter fare from the claw-footed performers in "Larry's Amazing Bird Shows." (9 a.m.-4 p.m. at Central Florida Fairgrounds; 407-855-3367; $5)

JAMES BROWN We've been reading James Brown's autobiography (called, naturally enough, I Feel Good) and we can't help but marvel at just how much this man means to modern music. Sure, there are all those issues of "resilience" and "perfectionism" and "temporary lapses of judgment," but this is a guy who recorded one of the most important albums of all time – Live at the Apollo – and paid for it out of his own pocket. He's provided a model for all musicians to be self-sufficient, independent and successful, but nobody ever wants to follow the model, preferring instead to crack jokes about how James talks or the crazy shit James does in the name of love. He's nothing but his own man, firmly committed to the idea that music should always be played as ferociously as possible and that it's all for the audience's sake. He still puts on one of the best shows in the world, and truly, without the music he made during his prime (all 20 years of prime, to be clear), this world we live in would be a horrible, horrible place. (6:30 p.m. at House of Blues; 407-934-2583; $42.50-$90)

CHRIS KING POP ICON It's an eternal black eye on Orlando that we lost Chris King Pop Icon to New York just as his career as a stand-up social critic was getting started. A handful of brilliant performances are all we have as mementos of the cable-man-turned-cultural-visionary and his existential-nebbish schtick. To that list, now add this Monday's homecoming gig, staged as a special-treat capper to the Orlando International Fringe Theatre Festival and constituting the first-ever public airing of King's new opus, I Can't Tell if I'm Eating Butter or Not. What's the show about? "I would call it a grand paranoid delusion," the artist assesses – though the point is to leave the viewer confused if the delusion King is laboring under is his or someone else's. Expect at least two segments with musical soundtracks, as well as a dialogue between King and the Zargonians – a hypothetical race he created for comedic purposes. And the program will definitely include a blistering attack on daily newspapers. "I'm pleased to see that the Sentinel's almost out of business," he says, cheerfully. "I'm going to evacuate my bowels into their face." Stand back, everybody; you don't know how much attitude this guy can dump when he gets going. (11 p.m. at Will's Pub; 407-898-5070; $10)