Superhero flicks want the milk, but won't buy the cowl 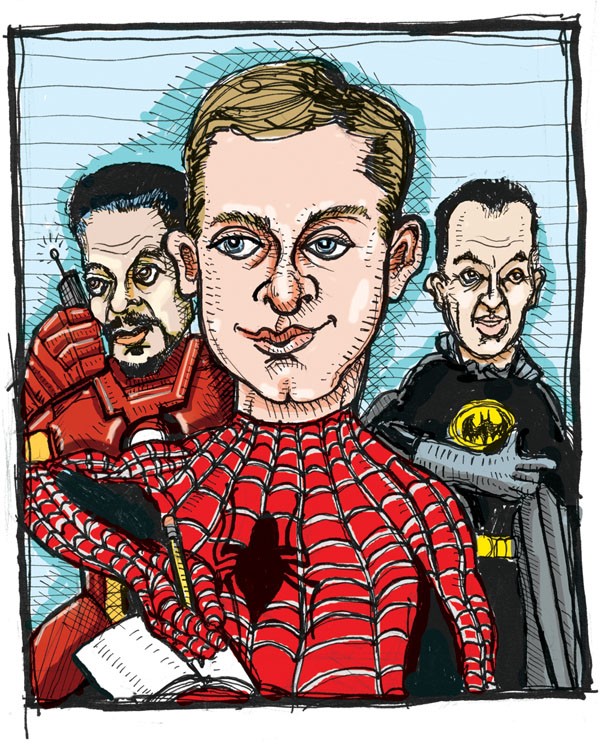 From Nicolas Cage to Ryan Reynolds, titular star of next week's Green Lantern, today's leading men just love to play superheroes - until it comes time to actually put on the mask. That's when egos and agents take over, forcing screenwriters to come up with ever more creative reasons for the lead character to walk around bare-faced. So this summer, if you find yourself wondering why Chris Evans looks like he's wearing a set of Captain America Underoos, flash back to these greatest hits of the domino-doffing genre.

Batman Returns (1992): In this underrated film's nonetheless absurd climax, Michael Keaton's Caped Crusader literally tears off his flimsy cowl at the neck to make an impassioned romantic plea to Michelle Pfeiffer's Catwoman. In so doing, he also happens to willingly out himself to arch villain Max Shreck (Christopher Walken) - but hey, what's a secret identity when a guy needs to emote? Things we learn from this scene: 1) In terms of strength and durability, the Bat-cowl is apparently a close cousin to something you'd buy at a Spirit Halloween store; and 2) Removing said cowl somehow causes the black NFL-style makeup around Bats' eyes to miraculously disappear. Further proof that working continuity on a Tim Burton picture is the sweetest no-show job in the business.

Iron Man (2008):Strange as it is now to recall, Robert Downey Jr. had hit rock bottom on the employability scale when he signed on to play ol' Shellhead for director Jon Favreau. So he wasn't exactly in a position to balk at the prospect of spending an entire movie behind a mask that customarily has all the expressiveness of Lou Reed. Favreau did him a solid anyway, and with one of the most novel approaches to vanity cinematography ever: Most of Downey's close-ups are super-tight "behind the mask" shots meant to position him as the four-color equivalent to an angst-ridden fighter pilot. Of course, in the film's battle royale between Downey and a similarly souped-up Jeff Bridges, both actors conveniently lose their helmets anyway, since an audience won't get the subtle subtext of lines like "Now I'm gonna kill ya" without the proper visual cues.

Fantastic Four (2005):Jack Kirby never showed you Victor Von Doom's ravaged countenance, and he didn't waste much ink on its smooth, pre-accident counterpart either. Then again, he didn't have Julian McMahon's manager breathing down his neck. The screen Doom's slow slide into disfigured alienation has all the drama of cutting yourself shaving three mornings in a row, then finally throwing in the towel by wearing a Mardi Gras mask to work.

X-Men (2000); X-Men 2 (2003): Blink and you'll miss any substantive footage of Sir Ian McKellen actually wearing his Magneto helmet - probably because when he tried it on in rehearsal, both he and director Bryan Singer agreed it looked totally gay.

Batman Begins (2005): The Dark Knight doesn't even own a mask until an hour or so in- to director Christopher Nolan's sprawling origin tale. How come? Because forestalling that big suiting-up moment allows star Christian Bale to fully explore the character's rich psychological makeup. And also because the cowl fits about as well as Ralphie's winter hat in A Christmas Story.

Iron Man 2 (2010): Favreau strikes again! By having Downey's Tony Stark reveal his identity to the world at the end of the first Iron Man, he freed up his star to spend most of the sequel waddling around maskless like a piss-drunk Transformer. Coming up in Iron Man 3: The pants go, too!

Spider-Man 2(2004): This one's the granddaddy of all superheroic ego trips, boasting not one but two gratuitous unmasked sequences. The climax is a no-brainer, with Tobey Maguire's Spidey making denuded goo-goo eyes at Kirsten Dunst. But the matinee-idol narcissism attains truly breathtaking proportions in the big "runaway train" set piece. Hey, that hot cinder just made my mask suddenly unwearable! Better toss it to the four winds so this subway car full of snot-nosed kids andSopranos alumni can really grok my Christ-like suffering! What's particularly bizarre is that Maguire had been such a pain-in-the-ass prima donna off the set - Maguire was this close to being replaced by lookalike Jake Gyllenhaal - that he had to beg and scrape to be brought back after 2002's Spider-Man. He's lucky Sam Raimi didn't make him play the entire sequel from behind a Jason Voorhees mask.