"Who's Dave?" I ask through my mask while staring up at the menu inside Mason Jar Provisions. I'm referring to the "Dave Dog" ($12), one of the sandwiches offered at this Thornton Park eatery that opened mid-pandemic. "That's my dad," says chef and co-owner A.J. Haines, whose father, I learn, passed away last November. It's a touching homage, and one that made my decision to order the sandwich pretty easy. I mean, how could I not? It's more than just a hoagie stuffed with saucy morsels of barbecue-braised short rib procured from the Pit Boss Pro Series, after all.

A lot of love was put into that sandwich, and I'm sure seeing people order it affords Haines a semblance of comfort – and comfort is where Haines, a journeyman chef who's worked in kitchens from Prato to Pizza Bruno to the Parkview, seems to find his inspiration. That might explain the appearance of the fried bologna sandwich ($11) on the menu too, thick-cut buttered toast and all.

Speaking of comfort, the sandwiches were enjoyed in the repose of our home, seeing that the bar stools inside MJP were closed to diners, and the idea of sitting at one of the streetside tables outside in 100-degree heat was foolish at best. But there are those who don't mind sweating it out – we saw a handful of glistening gals and gents keeping cool with a frosty bev from Burton's Thornton Park next door.

In fact, Burton's GM Jeff Darnell is the other owner of MJP, which makes for a very convenient partnership. Burton's, BTW, also offers its cocktails to go. (Oh, and this is completely unrelated, but if you're running short on croissants, do like I did and pick some up from Benjamin French Bakery across the street while you wait for your order. Their flaky numbers are worth dodging a car or two for.) 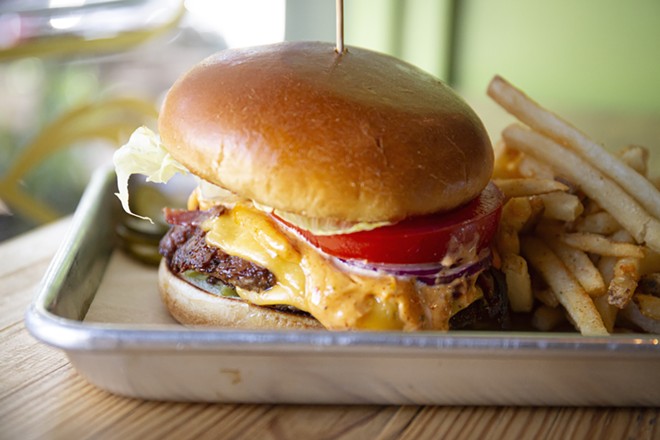 I enjoyed one of my chocolate croissants for dessert, but not before digging into more of Haines' savory indulgences, like his beef jerky ($10). I'll admit, there was nothing jerky about this jerky. For a second, I even thought we got the wrong order, because the jerky wasn't the least bit dehydrated nor chewy. Rather, it was moist, soft and tasted a whole lot like the short rib in the Dave Dog. Still, it made for a fine appetizer, and if you happen to be having a cold one at Burton's next door, you'd do well to pair your brew with this not-so-jerky. Same goes for the bourbon-glazed pecans ($6). Deez nuts would've made a perfectly fine ending, had I not scarfed the aforementioned chocolate croissant post-meal.

No doubt there's a lot of Southern influence on MJP's menu – smoked pimento cheese ($9), hush puppies ($8), fried gulf shrimp ($13), collard melts ($12) and the like. Personally, I was all about the boudin balls ($10) and their bulbous smack of pork, rice and jalapeños, though the jalapeño jelly dip was much too sweet for its own good, y'all. Yes, of course there are burgers!!! (I could hear many of you asking.) They're of the smashed variety, like the bourbon blue ($13) with its boozy batch of caramelized onions, blue cheese, white cheddar and pickles in a brioche bun. The burger, like most everything else served here, held up quite nicely after the drive home. It's all very takeout-friendly, and the fact that business appears to be brisk is proof positive that the food Haines serves from this little neighborhood joint is resonating with residents.

I think Dave would be proud.