A Q and A with Orlando's real-life superhero 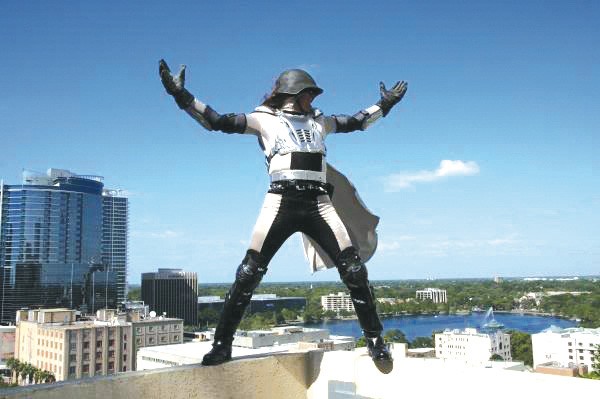 Multiplexes are flooded with superhero movies every summer, but most people are oblivious to the fact Orlando is home to a superhero who goes by the name of Master Legend. For the past 20 years, this outspoken, colorful figure has been dressing in costume and patrolling the streets. He's been featured in a documentary called Your Friendly Neighborhood Superhero, an HBO series on superheroes and an interview on BBC Radio 1. In 2008, Rolling Stone ran a feature story on him called “The Legend of Master Legend,” which profiled Orlando's real-life superhero and introduced readers to his band of crime-fighting allies in the Justice Crusaders. Master Legend doesn't just patrol the streets looking to obliterate evil; he's also an all-around do-gooder who feeds the homeless and hands out toys to needy kids. Be sure to keep an eye out for Master Legend the next time you head downtown – he's often out patrolling the streets of Orlando after dark.

DRINK: How many people know your secret identity?

MASTER LEGEND: The general public does not know, but some close friends and trusted people know my name. The police know who I am, and I have a certificate of commendation from the Orange County Sheriff's Department.

Are you worried that the actions of Sanford neighborhood watch volunteer George Zimmerman, who shot 17-year-old Trayvon Martin in February while patrolling his neighborhood, might have an adverse affect on vigilantes?

It may on vigilantes, but I don't think it will affect the superheroes.

Your hair is rather long, has it ever hindered your performance in a fight?

Not really, I actually have a special move for if someone pulls my hair – which some have, and I know [they] regret it.

The way I feed and supply goods to the homeless is not the same as they do. I go to places where the public doesn't really see. I have a food handler's license just in case, but I have never had a problem. For the record, we have had just as big, if not bigger, assemblies helping people by the hundreds at one time with clothes, food, drink, books, toys, helpful information, medicines, soaps, shampoo, toothpaste, etc.

How safe is downtown Orlando?

With all the cops around there, I don't see how people are still getting attacked out there. It depends on what time of the year and what events are going on. I am from New Orleans. Orlando is much safer then a lot of the cities I've been to.

Stigma [Tattoo Bar] is my newest meeting place and where I call an operation base, thanks to the beautiful ladies; they're also helping with toys for Christmas missions.

HBO did a documentary on you that featured you drinking, and some say it made you look like an alcoholic. Did that documentary contribute to your decision to give up drinking?

My girlfriend had just died when they came to film me, and that's why I was drinking. I quit before I even saw the movie. After I saw the movie I was disappointed, because they left out a lot and just wanted to show me beer drinking.

What was your drink of choice when you were still drinking?

How do you find the time to juggle your patrols, radio show, band, not-for-profit organization and day job?

I'm self-employed, and a lot of my money is made by sales that I can do at any time. I get to the radio show [online at Blog Talk Radio, blogtalkradio.com/master-legend] when I can, it has no set dates. The band is well-rehearsed so we don't have to practice all the time. My whole life is dedicated to being a superhero. I waste no time and am constantly busy from the moment I awake til I sleep. There are no idle moments.

If there was only one thing you would want the world to know about you, what would it be?

I'm a guy that comes from nothing, bad abuse, kicked out in the streets at 15 with no one to help me. I died twice, and on my second death I was given the power to make a difference for the better, and I will. Worldwide.