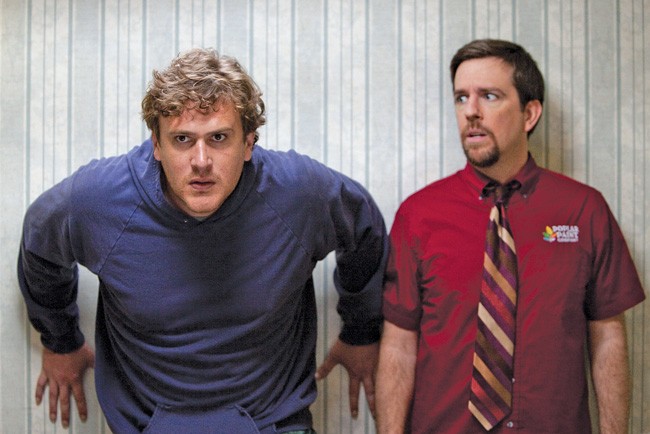 The world couldn’t be better off now that 2011 is finally over. At best, it was a year of transition; the fast before the feast, if you will. 2012 already feels like a real year – the U.S. gets another presidential election, London gets the Olympics, the Mayans get their apocalypse and filmgoers get an abundance of geek-out spectacle.

Heralding the influx of big-budget blockbusters-in-waiting is the appropriate return of some old-school moneybags boasting a fresh coat of 3-D paint, like The Phantom Menace (Feb. 10), Finding Nemo (Sept. 14) and the big daddy of them all, Titanic (April 6).

Then there are the bazookas – the movies all but guaranteed to shatter records and (they hope) blow minds: The Amazing Spider-Man starring The Social Network’s Andrew Garfield (July 3); Christopher Nolan’s Batman trilogy completion, The Dark Knight Rises (July 20); The Twilight Saga: Breaking Dawn – Part 2 (Nov. 16) and Joss Whedon’s The Avengers (May 4).

Those are the easier ones to gauge, but what about the rest? Below, for the fourth year now, I whip out my crystal balls and predict, based on almost nothing but the people involved, what else we might love in 2012. Yes, it’s a grand tradition that has, in the past, brought you fingers-crossed analysis of such future winners as The Box, Paul and, of course, Season of the Witch. (Also The Tree of Life, Bridesmaids and Moneyball, to be fair.) Take it with a grain of salt. I’ll take the blame.

Wanderlust With the plus-sized exception of Bridesmaids, Universal Pictures had a horrific year for comedy in 2011, chugging out laugh-free cringers like Larry Crowne, The Change-Up, Your Highness, Paul, The Dilemmaand other travesties, but hope must be clutched and fingers must be crossed for this Universal comedy co-written and directed by The State alum and Wet Hot American Summer director David Wain. It stars Paul Rudd and Jennifer Aniston (who, let’s not forget, can be charming when indie-channeled correctly) as a Manhattan couple whose sudden unemployment lands them at a free-love hippie commune headed by a bearded Alan Alda. (Feb. 24)

Jeff, Who Lives at Home 2010’s Cyrus proved that the mumblecore sensibilities of writer-directors Mark and Jay Duplass could successfully translate to higher-budgeted pseudo-indie territory populated by actors like John C. Reilly and Catherine Keener. This year, the Duplasses have moved up a few more notches, employing genuine box-office draws Jason Segel (The Muppets) and Ed Helms (The Hangover) for their story of two brothers coming to terms with adulthood. (March 9)

Silent House Like The Girl With the Dragon Tattoo and Let the Right One In, this is an American remake of a foreign (in this case, Uruguayan) suspense thriller originally released only a couple of years ago. Gustavo Hernández’s The Silent House, about a young woman trapped in a house full of secrets, was notably filmed in one 78-minute shot. Considering audiences could hardly take their eyes off Silent House star Elizabeth Olsen in Martha Marcy May Marlene, this oughtta work. (March 9)

Bernie Jack Black and Matthew McConaughey – two names that, by now, should strike fear into the heart of even the most forgiving filmgoer. Add another name to the mix, however – Richard Linklater – and watch as the eyebrows raise. Based on the true story of a beloved Texas assistant funeral home director (played by Black) who killed a rich widow (played by Shirley MacLaine) in 1996, then used her money to do nice things for his fellow townspeople, Bernie reportedly integrates actual interviews with people who knew Bernie and his victim. (March)

The Wettest County Based on the gruesome novel about three brothers in Depression-era Virginia in the bootlegged moonshine business penned by one brothers’ grandson, this film adaptation was written by singer Nick Cave and directed by John Hillcoat. Cave and Hillcoat worked together on The Proposition and Hillcoat’s most recent film was The Road, if that tells you anything about the likely grim tone here. Rounding out the cast are squee-inducing names like Tom Hardy, Gary Oldman, Jessica Chastain and (squee’s over) Shia LaBeouf. (April 20)

Abraham Lincoln: Vampire Hunter Wanted director Timur Bekmambetov helms this adaptation of the popular book by the same author as Pride and Prejudice and Zombies and proposes that the 16th president was trained from a young age to slay the demon spawn that took the life of his mother. In this world, slavery is a vampire-run practice and slaves are simply food on demand, so to abolish the trade is to minimize the vampire infestation. (June 22)

Brave It’s fitting that this Disney-Pixar production would feature a girl with something to prove, since so many involved in the film have some proving to do as well. John Lasseter’s genius factory must show that they still have the Pixar touch after the huge critical disappointment of Cars 2 with their first movie featuring a female main character. Co-writer and co-director Brenda Chapman has been a peripheral animation toiler ever since the lukewarm reception of her debut directorial feature The Prince of Egypt 14 years ago, and co-director Mark Andrews makes his first leap to the director’s chair following years of Pixar story work. The defiant, redheaded archer princess at this film’s center had better be ready to bestow some redemption. (June 22)

The Odd Life of Timothy Green Judging by the schmaltzy trailer, this fairy tale of a childless couple given the gift of their apparent dream child, who literally shows up at their doorstep claiming to be theirs at age 10, is a breeder-friendly Disney production that could lead to sugar shock. But the story – conceived and produced by Ahmet Zappa – its cast, including Warrior’s Joel Edgerton and Jennifer Garner (who’s always at her best when tapping into parental yearning, a la Juno), and its writer-director, the talented Peter Hedges (Pieces of April, Dan In Real Life), are an oddball enough assortment to resist total disregard. (Aug. 15)

Argo Speaking of Garner, her husband, Ben Affleck, happened to make one of the best crime movies in recent years with 2010’s The Town, so his follow-up, based on Joshua Bearman’s Wired article about a CIA plot to free U.S. hostages by masquerading as a Hollywood production shooting a sci-fi film called Argo (even using storyboards by Jack Kirby – played in this film by Red State’s Michael Parks), can be considered fait accompli. Affleck directs and plays the plan’s creator, Tony Mendez. (Sept. 14)

Looper This would be on any film fan’s radar based soley on the fact that it’s the third outing from writer-director Rian Johnson, after his remarkable Brick and The Brothers Bloom. That he’s reteamed here with Brick star Joseph Gordon-Levitt as a time-traveling assassin suddenly charged with offing his future self (Bruce Willis) in order to “close his loop,” is just gravy. (Sept. 28)

My Mother’s Curse Writer Dan Fogelman has, in recent years, amassed one of the most unpredictable and solid résumés in Hollywood. A master at balancing the sweet with the sour, his screenplays for Tangled and Crazy, Stupid, Love, released less than a year apart from each other, have more than made up for his past Fred Claus sins. His new one, starring Seth Rogen as an inventor and Barbra Streisand as his mother, is rounded out by a great cast, including Colin Hanks, Adam Scott and Chuck’s beautiful Yvonne Strahovski. (Nov. 2)