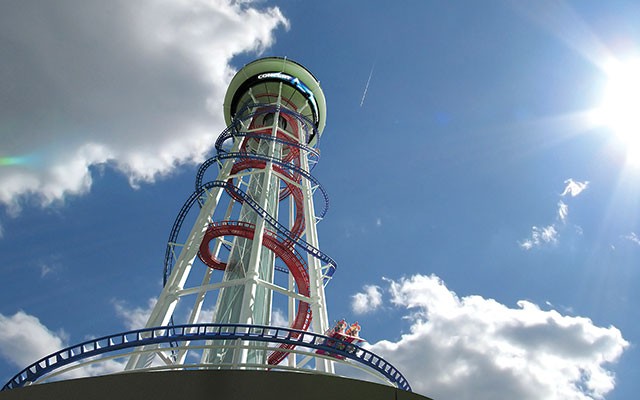 Picture this: You’re spiraling skyward, watching the sprawl of International Drive recede beneath your seat. Soon you’ve passed the heights of the Cinderella and Hogwarts castles, Bok Tower, Busch Gardens’ new Falcon’s Fury and even the SunTrust building, leaving them all hundreds of feet behind. Then, as you reach 55 stories above the ground, you have a few moments to admire the coast-to-coast view across Central Florida before the floor flips beneath you. You’re hanging upside-down with only a waist harness holding you in, twisting toward the earth at highway speeds. Sound like fun?

Joshua and David Wallack, owners of Miami mega-club Mango’s Tropical Café, are betting big that millions of thrill ride fans from around the globe will answer, “Hell, yes” to that question and flock to ride the world’s tallest roller coaster. We first learned about the Polercoaster concept at last year’s IAAPA convention, where US Thrill Rides and S&S Worldwide were pitching plans for a Stratosphere-style observation tower with a coaster track wrapped around the outside. But when the promised announcement of a Florida installation didn’t immediately materialize, the project fell off my radar.

Now this supersized wild mouse is back on my radar in a big way: The Wallacks and US Thrill Rides made a splashy announcement last Thursday at the site of the future Skyplex entertainment complex, whose 570-foot Polercoaster centerpiece will be dubbed the Skyscraper. They sent me up in a helicopter to see the expansive view (haze permitting) visitors will have once Skyplex opens in 2016, and the chopper flight was nearly as exciting and scary as the Skyscraper promises to be. Here are three reasons why this ambitious project thrills me and three why it gives me the chills:

Thrill: Bill Kitchen
Skyscraper boasts intimidating specs: the world’s tallest inversion; 65 mph top speed; 5,200 feet of track; 1,000 riders per hour. But if anyone in the coaster industry can make this crazy concept into a fun and safe experience, it’s US Thrill Rides founder Bill Kitchen. The designer of the Polercoaster is also responsible for the SkyCoaster swings at both Fun Spots and the iFly skydiving simulator at Universal Boulevard, making I-Drive a virtual showroom of his insane inventions.

Thrill: Entertainment
Apart from the coaster, Skyplex promises to host nearly a half-million square feet of attractions under air conditioning. Details are vague, but concept art includes a two-story mall, restaurants and “interactive venues,” not to mention the restaurant-bar at the tower’s top. Dining options along that stretch of I-Drive can be dire, so it will be nice to see some upscale eateries come to that area. And the lighted fountain planned for the plaza could turn into an attraction in itself.

Thrill: A new epicenter
Skyplex will sprout on 12 acres atop the long-abandoned Fun N Wheels go-karttrack, just north of Sand Lake Road. On the opposite side of the street, the Wallacks’ Orlando outpost of Mango’s Tropical Café is rising, right up the road from Merlin’s I-Drive 360 and the Orlando Eye Ferris wheel. Disney currently relies on special events (like the recent Star Wars Weekends and upcoming Villains Unleashed party) to draw fans, but has no new rides slated to open between last month’s Seven Dwarfs Mine Train debut and 2017’s Avatar-inspired land at Animal Kingdom. Between these I-Drive attractions and Harry Potter’s expansion at Universal, the tourism corridor’s center of gravity is starting to shift northward, something assumed impossible a decade ago.

Chill: Retail
Joshua Wallack says they are looking to stock Skyplex’s retail space with brands that are more NYC than Mall at Millenia, but unless they sell something truly unique or are an outlet store, it’s hard for shops to survive on I-Drive.

Chill: Financing
The $200 million project (a surprisingly lean budget for such an enterprise) has financing “commitments,” according to Wallack, but their website is actively soliciting foreign investors. While their Miami investments are very successful, it’s unknown whether the owners have pockets deep enough to ensure such a major project’s completion, and a vague “2015 groundbreaking/2016 opening” timeline doesn’t inspire confidence.

Chill: Traffic
Cars already move along I-Drive slower than Disney’s line to meet Anna and Elsa, and an attraction of this magnitude can only make things worse. The 1,500-spot garage will enter and exit onto nearby Canada Avenue, which will increase congestion at Carrier Drive and Sand Lake Road. And while the Wallacks support a pedestrian bridge over the nearby intersection, they haven’t committed to fund one. Without infrastructure upgrades, just driving past Skyplex may prove more death-defying than the Skyscraper’s plunges.