Paws for a Cause

Waffles, a dog with a funny name and a heart of gold, is this year's Puppy Love cover-model contest winner.

This 1-year-old Australian labradoodle is not just another adorably fluffy face – she's currently training to become a therapy dog so she can visit local children's hospitals, and she uses her winning personality (and social media) to raise money for good causes.

Waffles is no stranger to fame; she has an Instagram account with more than 500 followers, and everyone who meets her adores her – something that comes as no surprise to her owner, Martha Lewis.

"She has a sweet, loving demeanor about her and she definitely loves people," she says. "If you sit on the floor she will come climb in your lap."

Waffles got her name because Lewis wanted people to smile every time they heard it.

"You would either smile because you liked the name and thought it was cute or it would make you smile more like a smirk because you would be thinking, 'Who would name their dog Waffles?'"

"One of my goals is that she can give hope and a smile to people when they're in a hopeless situation, that she can brighten people's day," Lewis says. "You could say Waffles has a heart for others. She thinks it's better to give than receive."

When she's not training to be a therapy dog, Waffles enjoys taking walks with Lewis, bounding through her neighborhood parks to feel the wind in her floppy ears and playing with her favorite toys, which include a set of plastic keys, a squeaky pig and the caps to laundry detergent bottles.

She also loves working at a children's store on Park Avenue greeting guests and playing with her four human sisters.

When asked what sets Waffles apart from other dogs, Lewis could only think of one way to describe her four-legged friend: "Every dog is special, but she's just Waffles." 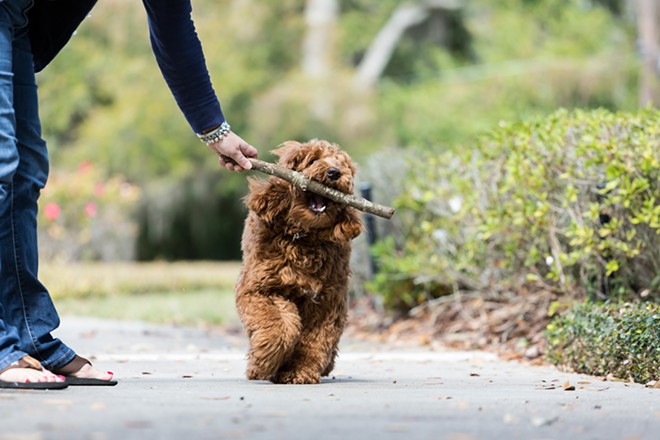