Lars von Trier's latest is new and the same, but brilliant either way 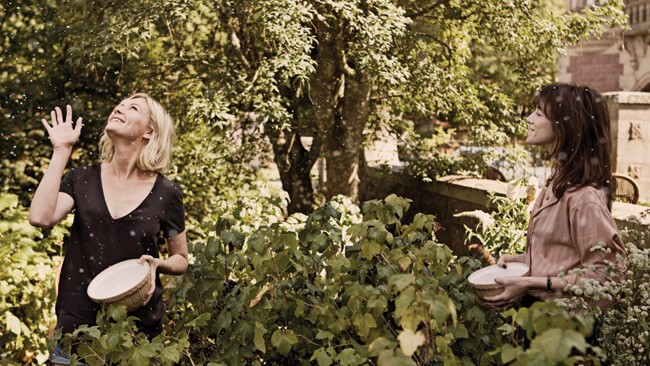 T.S. Eliot wrote that the world ends not with a bang but a whimper. In Melancholia, Danish director Lars von Trier’s latest ode to the triumph of the human spirit, it ends with both. Kirsten Dunst and Charlotte Gainsbourg play sisters facing the end of the world, as an onrushing rogue planet threatens to pass through Earth’s orbit and the Earth itself.

Dunst, in a stunning performance, plays the pretty younger sister, Justine, a newlywed with a building tide of emotional problems threatening to capsize her life, and, in the immediate, her wedding reception. She’s been like this before, but is warned, “Not tonight.” Throughout the reception, people try to buy her happiness: her new husband, Michael (Alexander Skarsgard), gives her an apple orchard where she can go sit to feel happy when she’s down; her brother-in-law, John (Kiefer Sutherland), throws her a ridiculously lavish reception, then constantly reminds everyone of its price tag. He even goes so far to ask Justine for a deal: He will consider it money well spent if she agrees to be happy.

Depression doesn’t work like that, obviously. In Melancholia, this sadness happens to manifest itself in the specter of a planet on a collision course with the Earth. It seems no coincidence that the planet Melancholia blots out Antares on this night and surges towards Earth, growing bigger as Justine falls deeper into her widening abyss.

In the second half of the film, the focus turns to Claire (Gainsbourg), the sensible older sister who tries to keep all of their lives together. She’s fighting a losing battle. Eventually, even Claire tries and fails to buy Justine’s happiness with a sentimental favorite dinner – meatloaf. Justine only cries that it tastes like ash. By this point, planet Melancholia is just days away from Earth, and even though John insists it will miss, Claire has fallen victim to the doomsayers. Hers is just as much a vicious, uncontrollable spiral as Justine’s depression, although it’s based in a logical reasoning, not a chemical imbalance; fear, von Trier conveys, is easily manipulated – it’s the polyethylene foam to depression’s reinforced brick wall. The reality of seeing a planet come so close to Earth that it steals part of our atmosphere and makes it snow during the summer would inherently cause anyone to become illogical.

Melancholia is both a touchdown on new soil and a revisit to familiar ground for von Trier. He’s never done anything quite so beautiful and visionary, but some of the more down-to-earth elements are familiar from his canon. Breaking the Waves, too, begins at the wedding of an unstable girl and follows her through her emotional descent. Bess (Emily Watson), a member of an ascetic protestant church in the Scottish highlands, manifests her problems with attachments: to Jan (Stellan Skarsgard), her new husband, to Dodo (Katrin Cartlidge), her sister-in-law, but most especially to God, who she talks to and gets damning replies from. This God is in her head, speaks through her mouth, but to her is as real as the air she breathes.

But where Justine is on her own, circling the drain of her sorrow, Bess is egged on by Jan and by her own immense guilt. There is no hint that Justine has ever felt guilt. She is not crazy or delusional; she’s systemically imbalanced. Still, she says she knows things about life, things she shouldn’t know. Does she know, or is she just insisting?

Melancholia isn’t a one-and-done film. It can be easily dismissed when taken at face value, waived off with the intellectually lazy “first-world problems” wand, but it actually contains a complex, rich core deep down. It’s an overwhelming film as a first viewing, though, and von Trier doesn’t make anything about it easy. And nor should he.