In the middle of a media moment that's focused on the female, it would be easy to lump in the current exhibition at the Mennello Museum of American Art. Grace Hartigan 1960-1965: The Perry Collection shows the work of a female painter as collected by a female art dealer, and occupies walls in a female-run museum. But that would be reductive; the endgame of our current drive for parity is to break out of the walled garden of gender.

Regardless, Hartigan is lumped in to the enclosure labeled "Post-War Female Abstract Expressionists," coverage of which is always (explicitly or implicitly) subtexted "They're just as good as Willem and Jackson – honest!" Can we discard the boys-against-girls lens through which that movement is seen? We can try, anyway. This show deserves to be looked at with cool eyes, not political ones, though within a few minutes of perusal those eyes may turn as heart-shaped as an emoji's.

Like her close friend, the poet Frank O'Hara, Hartigan was enchanted by the stuff of everyday life. O'Hara's poem "Today" ("Oh! kangaroos, sequins, chocolate sodas! / You really are beautiful! Pearls, / harmonicas, jujubes, aspirins! ... They / do have meaning. They're strong as rocks") illustrates this pie-eyed delight as aptly as Hartigan's 1957 statement, "I have found my subject, it concerns that which is vulgar and vital in American life, and possibilities of its transcendence into the beautiful." 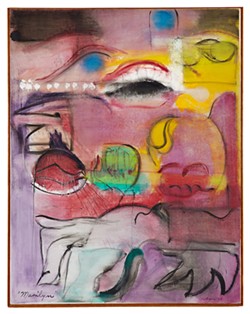 While her earliest work was orthodoxly abstract, toeing the line of no figuration, eventually figures begin slyly to waft in and out of view – everyday objects, cartoony faces. Gaze for a moment at her bopping ode to a Baltimore shopping center, "Reisterstown Mall," and you'll see vinyl albums and barbershop poles, toothbrushes and stacks of magazines, canoodling couples.

"Marilyn," of course, is the apotheosis of Hartigan's affection for pop culture (a fixation prefiguring that of almost every contemporary artist working today). One of the most enjoyable elements of this show is seeing the collages and visual "notes" Hartigan assembled on Marilyn Monroe – newspaper clippings, gestural drawings of her hand, her eyes, her hair, her mouth – in preparation for the finished 1962 painting. By the way, the unconventional layout of the Mennello may cause you to miss the small side room between the main gallery and the entrance – don't, as it's currently holding one of the most luscious of Hartigan's Matisse-like untitled collages.

A funny thing's been happening since Shannon Fitzgerald took over as director of the Mennello Museum of American Art: The tiny museum has consistently booked shows full of whoppingly large canvases – Hartigan's and Bo Bartlett's being notable examples. Without forcing a metaphor, we can't help but hope that these big pictures are symbolic of Fitzgerald's aims for the institution.