A SWINGIN' CHRISTMAS Charisma is Michael Andrew's gift to the world, all wrapped up in his dashing good looks and swanky wardrobe. His voice alone is sexy enough to make you want to sit in his lap and call him Santa, yet the Sinatra-esque crooner has spared no trimmings on this Christmas special. This year, Andrew will be gathering his 18-piece Atomic Big Band, the a cappella singing group Mosaic, Jennifer Leigh ("like a Patti Page singing 1940s and 1950s swing with a rock edge," he says) and Suzy Hosmer ("an incredible jazz soprano, like an Ella Fitzgerald"). Together they will perform new arrangements of the chestnuts on A Swingerhead Christmas, Andrew's 1999 release that's turning into a local holiday treasure. (Pottery Barn even included the jokey "Mistletoe Mambo" on its Holiday Trilogy CD set this year.) And Andrew is throwing in a heartfelt, three-song tribute to one of his beloved influences, Bobby Darin, in anticipation of the year-end release of Kevin Spacey's Beyond the Sea bio-pic. Because he's such a stickler for perfection, when you lay out cash for this Andrew hoo-ha, you're guaranteed to feel the holiday magic. (8 p.m. Thursday and Friday, 2:30 p.m. Saturday at The Plaza Theatre, 407-228-1220; $30-$40)

A TUNA CHRISTMAS What could have motivated improviser par excellence Jay Hopkins to end his 12-year tenure with SAK Comedy Lab and strike out on his own as artistic director of his own, for-profit production concern, The Jester Theater Company? For one thing, there was the chance to spend more time with wife Diana (who has transitioned from box-office manager at SAK to managing director for Jester), but the main reason he cites is a general feeling of having learned everything possible in his old environment – a dawning awareness that it was time to be his own boss. "I've never met anyone who regretted taking `that` risk," Hopkins says. The first test of his newfound independence is a production of the holiday-themed burlesque A Tuna Christmas, which casts Hopkins and fellow funnyman Jason Horne as 22 residents of the "third smallest town in Texas." Directed by SAK/Discount Comedy Outlet alumnus Anitra Pritchard, the fast-paced, costume-intensive show will be presented at The Studio Theatre – yes, right next door to SAK – though the Hopkinses say they're exploring the possibility of opening their own performance space somewhere down the line. But for now, whipping up a Tuna casserole in somebody else's kitchen is enough of a yuletide project to keep these master chefs of wackiness busy. (8 p.m. at Studio Theatre, 407-927-5043; $11-$15; through Dec. 26)

THE MAGNETIC FIELDS Stephin Merritt's voice sounds like Philip Oakey of Human League after a martini-and-karaoke bender. On the classic 69 Love Songs, Merritt's velveteen deadpan warbles atop pop songs almost moronic in their simplicity. But it's precisely this combination of candor and melody that makes The Magnetic Fields so endearing. Merritt can carry off lyrics like "I was young, then not so young – scary either way" or "it's all black and white, without the white" with such aplomb that you can't tell if he's being sincere or silly. On the band's major-label debut, i, Merritt cruises through 14 songs that expand on his sense of drama and tend toward a Broadway-musical bent; how apropos, then, that the unusual venue TMF will be performing at is Rollins' Annie Russell Theatre. (with Darren Hanlon; 5:30 p.m. and 9 p.m. at Rollins College, Annie Russell Theatre; 407-246-1419; $20)

CHOREOGRAPHER'S SHOWCASE The story of dance students struggling for their big break always makes for a successful big-screen spectacle – the music, the moves, the passion. There may or may not be some sense of reality backing those flicks, but Valencia Community College's annual event could shed some light on the plight of artists. This showcase is by students for students, from the selection of music to dance steps to costumes. The styles represented are eclectic (from ballet to jazz to modern) and so are the musical compositions (from Scott Joplin to Björk to Pink Floyd). Aspiring choreographers and dancers audition for a spot in the program held in the intimate Black Box Theatre, which is usually filled to sell-out capacity. That's why additional performances have been added for a total of four opportunities to be inspired by the next generation of movers and shakers. (8 p.m. Thursday and Friday, 2 p.m. and 8 p.m. Saturday at the Black Box Theatre, Valencia Community College East Campus, 407-582-2900; $5)

WANDA SYKES There's something about Wanda Sykes' weary rebellion that we love. She always seems worn the fuck out by life's ridiculousness and perplexed by how people can be so stupid sometimes. Just like us! It's that knowing, deadpan delivery – especially when punctuated by her occasional outbursts – that forces us smart people into fits of "ohmygodshe'ssoright," while the stupid people get off on her willingness to drop F-bombs like a sailor. Plus, she's got one of the most expressive sets of eyebrows in comedy. (with Keith Robinson; 7 p.m. at Hard Rock Live, 407-351-5483; $32.50) 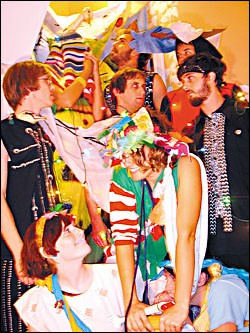 THE AFTERLIFE We're really not sure what to make of this ... and we think that's kinda the point. Here's what we know: In keeping with The Peacock Room's goal of becoming the most bizarre non-theater theater venue in Orlando, The Afterlife is a play. The play is about a band (The Band of the Name ... that's their name ... for real, we've seen 'em before and that's their name). The band dies, as bands do. And this play charts their "not-so-perilous journey through the afterlife while being led by the semi-divine Swomee Swans." (At least that's what the e-mail we got said.) The Swomee Swans? A dozen-member band, featuring folks from Unicornicopia and three bands we've never heard of. Confused? We are too. Perhaps this other bit of info will help: "Not to be taken too seriously" – duh – "the show will feature animals on zip lines, a large furnacy elephant, a talking apple hat and a slew of ridiculous sing-a-longs." Now, we don't normally like quoting from promotional e-mails, but we really couldn't figure out a better way to describe this. Other than, of course, by promising that we'll totally be there. (11 p.m. at The Peacock Room, 407-228-0048; $4)

MITCH HEDBERG Last time Mitch came to town, we mentioned that we had been disappointed with the drug-free delivery that made his most recent CD a bit of a drag. He apparently took a really funny swipe at us from the stage during the first of his three nights at the Improv, and we were honored to have inspired him so. When we showed up on the second night – fully prepared to be able to say "told you so" – Mitch blew our heads off. (Actually, he just blew beer out of our mouth, we were laughing so hard.) We found him pounding "straight vodka" just like it was water (cough, cough) and berating the audience for calling out requests ... and it was really funny. Not because Mitch had turned into some cranky old alcoholic bastard, but because the guy on stage was exactly the Mitch Hedberg we had come to love, in all his bemused, slow-delivery goodness. So allow us to retract our previous reservations and implore you to come out and see the funniest man in America. (with Stephen Lynch, Al Madrigal; 7 p.m. at Hard Rock Live, 407-351-5483; $27.50)

THE BODY OF ART The Cypress Cove Nudist Resort and Spa is billing its first-ever art show as a compensatory gesture for an alleged conservative trend in exhibit planning – one that's discouraging the displaying of nudes in public forums. (Know where else the unadorned form is pretty darn scarce these days? Our apartments!) If that's so – or even if the two-day show serves no greater purpose than exploiting the tastes of a local fine-art cognoscenti weaned on impresario Victor Perez' annual Nude Nite event – we're ready to pronounce it a pretty fine idea. At press time, 24 artists from Florida and out of state were confirmed to be taking part, including sculptor Amy Wieck and photographer Bonnie Shedd. And with an actual nudist resort serving as the host site for this salute to the aesthetics of nekkidness, it's reasonable to expect a certain synergy of audience and content. If that thought troubles you, note this codicil in Cypress Cove's PR materials: "Nudity will not be required by artists or attendees." Now try not to dwell on the thought that the folks who are going to take advantage of the option are probably the very ones who shouldn't. (10 a.m.-5 p.m. at Cypress Cove Nudist Resort and Spa, 407-933-5870; free; also Sunday)

ISIS Panopticon, the new record by Boston space-core act Isis, is based on the seeing/being-seen power paradigm proposed by Michel Foucault in Discipline & Power: The Birth of the Prison. Through this record, Isis, we believe, are attempting to comment on the increasing amount of surveillance employed by everyone post-Sept. 11: traffic cameras, tollbooth cameras, street cameras, etc. But honestly, do they really need a theme for an album that's only about 20 percent singing (and of that singing, 90 percent is unintelligible)? What part of Foucault's paradigm will you remember after seven eight-minute excursions of sprawling, slow-burning guitar build-ups with Cookie Monster singing in tongues? And we're not trying to bag on Isis – Panopticon actually is a good record – but skip the lesson, especially if you're not going to sing it. For concertgoers: Beware of the between-songs banter. (with These Arms Are Snakes; 9 p.m. at The Social, 407-246-1419; $12)

AFRIKA BAMBAATAA The rituals of area "service industry nights" are somewhat mysterious. All we know is that they involve people who make their living by being treated like slaves by other people six days of the week. Waitrons, bar staff, hotel clerks ... you know, the people tourists trample over in their pursuit of holiday perfection. Thus, it's not surprising that these weekly gatherings of the clan (especially the clan who works in the Disney vicinity of House of Blues) involve massive amounts of alcohol, lots of ass-shaking and dark-corner hookups, all in the name of stress relief. Be thankful the folks at House of Blues (and pretty much any other bar that is kind enough to host these nights) open their doors for the clan, for if they didn't, trust us that it wouldn't be long until there was a county-wide epidemic of wanton waitron-on-diner violence. That HOB ups the ante even more by bringing a legend like Afrika Bambaataa (you know, the guy who recorded "World Destruction" with John Lydon ... oh, and another little ditty called "Planet Rock" that's, like, the best electro-rap song ever) is truly a mark of respect. (10:27 p.m. at House of Blues, 407-934-2583; $10)