Florida premiere of off-Broadway hit about queer advocacy in the years before Stonewall. 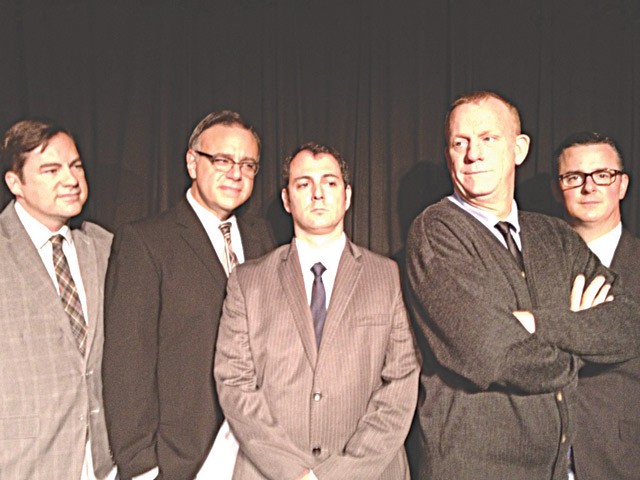 Jon Marans' recent off-Broadway hit, The Temperamentals, aims to shed some light on a lesser-known entry in the annals of gay activism. But on a deeper level, the play is about the enduring struggle between a bunch of ideas that all happen to start with the letter "c." On one side, we have competition, conflict and conformity; on the other, cooperation, creativity and … uh, communism. Which team will win? And did I mention it's the 1950s?

In the early part of the decade, schoolteacher and closeted homosexual Harry Hay takes on the Herculean task of assembling an advocacy group for men who share his forbidden orientation. Given that he's already a member of the Communist Party, he has a model to work from. And in his lover, the Austrian-Jewish costume designer Rudi Gernreich, he finds moral and financial support. Yet the recruitment phase reveals that their most immediate enemy may be themselves. Some of the men they approach about joining are flat-out dismissive – not only of risking their safety and social standing, but of self-identifying as an oppressed minority. How will that position them vis-à-vis other, more visible minorities? Will it mean they're no better than, say, the Negroes?

Hay and Gernreich nonetheless manage to assemble a core of five founders for their Mattachine Society (named after some masked French activists of the Medieval and Renaissance periods). The stakes of their solidarity become clear near the end of Act One, when one of their number, Dale Jennings, is arrested on trumped-up charges of public lewdness, and the blithely institutionalized persecution of men like them is thrust into the legal spotlight.

Marans' script is witty and bold; it also sets up a series of traps that he mostly avoids. Though the dialogue, for example, occasionally flirts with Sorkinesque self-importance, the need for the closeted characters to speak in perpetual code gives the playwright license to indulge in all manner of colorful metaphorics without any of it coming across as especially overblown.

For the show's Florida premiere, director Michael Wanzie has likewise played mostly to the strengths of his five-man cast, which is headlined by Michael Colavolpe as Hay and Michael Marinaccio as Gernreich (Doug Ba'aser, Doa Farrentine and Russell R. Trahan round out the Society and assume a variety of lesser, more transient roles). While the talent on display isn't exactly of equal pedigree, just about every player is given business that's an effective fit with his own mien and skill set.

Ba'aser in particular adds necessary notes of lightness, employing his considerable aptitude for comic relief to endear us to the more queenly characters. In an impressive transition, he then shifts effortlessly into the serious, even pivotal part of the straight defense lawyer who takes on Jennings' case. In the context of the show, that metamorphosis could read as hetero minstrelsy, but Ba'aser and Wanzie play it for every ounce of its thematic significance. They understand that the implications of Hay's struggle aren't just for gay society but for society as a whole. He and his comrades are challenging a basic misconception that afflicts us all: They've declared war on the myriad injustices that accrue from our tendency to associate rigidity and perpetual antagonism with "masculinity."

In one of the play's key moments, Ba'aser's lawyer character admits that Hay's increasing flamboyance makes even him uncomfortable. Whereupon he adds three crucial little words – words that we as a people keep forgetting how to say: "Good for you."