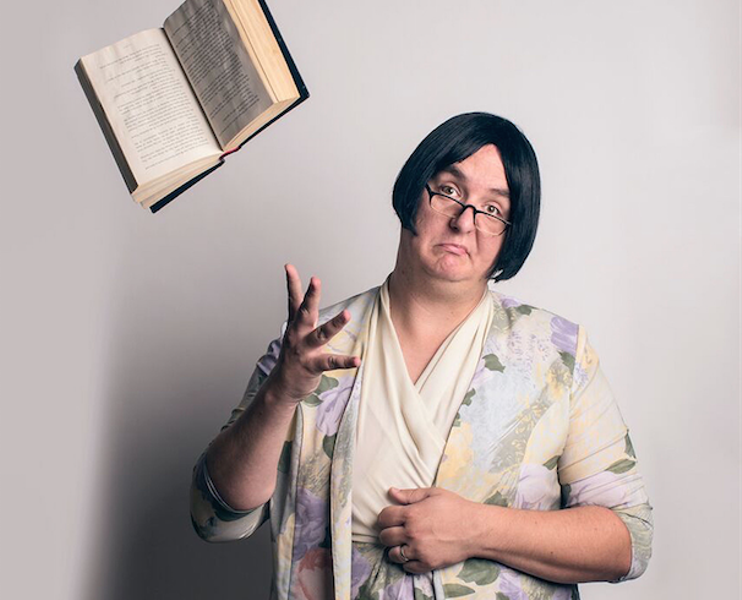 Mike Delamont has won over critics and audiences at the last few Orlando Fringe festivals with his four-part satirical soliloquy God Is a Scottish Drag Queen, and on Saturday, Sept. 10, he returns to Orlando for a full-evening encore of parts 1 and 2 at the Plaza Live. In advance of the show, I was granted this schizophrenically surreal three-way interview with Delamont and the cross-gender Deity he portrays.

Orlando Weekly: Welcome back to Orlando! Obviously a name as big as yours could fill houses anywhere in the world. Why do you keep returning to perform in Central Florida?

Mike Delamont: Well, we are doing a large Canadian tour of the show and it just didn't seem right to miss out on Orlando. It is one of top three cities that the show does, and the people are so insanely supportive. You can't quite beat the Orlando audiences.

God: I'm going for the churros. It will be nice to enjoy that city without the insane heat. What is Central Florida like without your balls stuck to your leg? Perhaps that's a question I will finally get to answer!

Your show at the Plaza Live is a combination of God Is a Scottish Drag Queen parts 1 and 2. Will there be anything new or different for patrons who saw them performed previously at the Orlando Fringe?

MD: The last two years at the Fringe we bumped up to a much larger venue and we've had probably around 2,000 people see the show each year, but the first two years we were in a much smaller venue and the shows didn't sell out, so only about 25 percent of the people who have seen parts 3 and 4 have seen parts 1 and 2. So they can finally see the original chapters.

G: We have blended the two shows together, so even though it's two acts it's not Part 1 and then Part 2; it's a fantastic combination of the two shows. Some material got cut out because it was old and dated and some added in, so it is fresh and very funny. It's the best version of the show to see.

Between shootings, gators and Zika, it's been a rough summer here. Is it true that "God Hates Florida"?

MD: I don't know if I am the best to answer this.

G: Let me set the record straight. I hate Florida with a fiery passion. I like Floridians, they are good people, but the state needs to go. It's a swamp. You live in a swamp. There should be MORE mosquitoes, and I have done my best to keep them at bay for a long time but each year I care less and less. It's a dump. If humans hadn't invented air conditioning, nobody would be there. All I'm saying is if my neighborhood was filled with Republicans, giant bugs, hurricanes and heat from the devil ... I would move. I think the people of Florida should just flip open the Book to Revelation and start checking shit off. It's time to go. Bring the mouse with you. Maybe try Idaho.

I can't argue with God being a drag queen, but why Scottish?

G: I like it! I think it makes me accessible and delightfully lilty.

MD: When we created the character in 2006, we tried out a few accents. English was the main one, but it came off as too strict. With the Scottish accent people understand pretty quickly that the character is in on the joke the whole time.

Where does a God of such awesome size buy power suits? The Big & Tall Deity department?

G: I get mine from a Village of great Value.

MD: The original one was just a great accidental and very affordable find. I mean, who would have guessed I would still be wearing it 10 years later? The newer ones have been built by a designer who works in opera. They are great quality, and my wife likes to remind me that the power suits cost about four times more than her wedding dress.

If God has complete dominion over time and space, why did you always seem to get cut off before reaching the end of your material during the Fringe? Were you doing it on purpose as a test of our faith, or was it ... Satan?!?

MD: It's fair play! You have to leave the audience wanting more!

G: I always get cut off! I think it's stupid that we can't go longer! Nobody is seeing the stupid dance show next! But now we don't have to worry about it. The show at the Plaza is two and a half hours! By the time I am through, the audience will want NO more.

Finally, the question philosophers have been trying to solve for eons: If God is all-knowing, all-loving and all-powerful, why do Trump things happen in the world?

G: Because without darkness we can't see the light. And I honestly never thought he would make it this far. So ... that's on you.