Mira Lehr creates art with gunpowder, rope, mirrors – whatever it takes to draw attention to our warming seas

At the beginning of this year – if you can remember back that far – our planet's rapidly accelerating climate crisis was on the front page of every newspaper, and the opening of artist-activist Mira Lehr's environmentally themed solo exhibition High Water Mark brought national attention to Orlando's Mennello Museum of American Art with glowing coverage in the New York Times.

Then along came 2020, and climate change was pushed out of the headlines by the pandemic and racial protests. But for Lehr, who contributed to Buckminster Fuller's influential World Game over 50 years ago, that makes this the perfect time to turn our attention back towards what's happening with Mother Earth. And so, while many Central Florida cultural institutions remain closed, the Mennello has reopened its doors to once again share Lehr's urgent vision with patrons, and the exhibition has been extended through September.

When I first interviewed Lehr in January, she shared how rising sea levels had the climate crisis literally lapping at her Miami home's front door. When we caught up over the phone last month, I learned that COVID-19 had come even closer.

"My studio assistant got the virus; she wasn't with me when she was contagious [but] she seems to be recovering," Lehr says. "My son-in-law got it because he had to go to the hospital for a checkup, so he got it there and gave it to my daughter. They're all recovering, thank goodness."

Luckily, the 85-year old Lehr herself has remained healthy so far, and she says she's adapted well to the "new normal."

"I'm kind of a hermit anyway, so for me, life has not changed that much. It's changed in that I don't see my family. Nobody comes around as much." In fact, Lehr has discovered a psychological silver lining in the solitude: "It's given me actually more time to reflect and get some new ideas. I kind of have this spiritual feeling that this setback of the virus and everything has caused us to take note, and for people to be a little more reflective of what's happening to the planet. So for me, it's a time of growth and reflection."

Rather than distract from desperately needed climate action, Lehr hopes the coronavirus can compel others to reflect on the interconnection between our health and the planet's, an underlying theme of her monumental artworks. "It becomes more and more apparent that the Earth is sick, and with it came this virus," she says. "I think it's a call to wake up, and I want to see people taking heed and realizing there's a bigger picture out there than their own lives. I think the whole planet is in jeopardy." 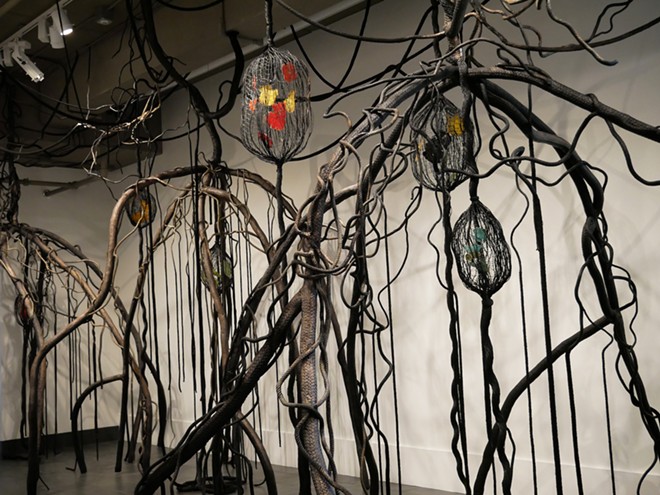 Mennello director Shannon Fitzgerald says the national acclaim that High Water Mark received is a boon to the museum's mission. "[It] helps to establish context and important peer institutional inclusion, that the caliber of the art and the timeliness of the message and weight of the content was raised and considered beyond Orlando," she points out.

Lehr says the show made people "much more aware of who I am now, and what I'm talking about. I think it's been a very very positive thing for everyone, and mostly I'm thrilled the message gets out."

In order to reopen and continue sharing that message with visitors, Fitzgerald says the museum upgraded their HVAC system, added temperature checks and installed touch-free devices, among other city- and state-supported social distancing measures. "[This] actually provides much more intimate viewing and physical time with the work," Fitzgerald suggests. "With few visitors, Mira's work seems even more visceral – and the experience is more contemplative – and that has been welcomed."

Since the pandemic hit, Lehr says she's "hearing from many people from all over about how they respond to my work," and now that the Mennello has reopened, she thinks High Water Mark has "more credibility with all the troubles we've gone through, because it's more dramatic now. It concerns people; people are worried and they're scared, and I think this reaches them on the level where they can connect with the climate and with the environment." And Fitzgerald observes, "We see repeat visitors, which may suggest Mira's work is calming, despite its urgent call."

Even after the current pandemic passes, Lehr predicts our lives – and culture – will be forever altered.

"I don't think we'll ever go back to the way we once were. For me, there's almost a mystical thing that this has happened," she says. "I'm hoping there's going to be a new vision of one world."

That extends to Miami's art scene, of which Lehr has been called "the Godmother," and which she says might eventually emerge improved. "The galleries certainly are suffering, and art is not being as profitable for people as it once was. But that could be a good thing too, because I think the commercialization of art became a little bit overwhelming. So I think the good artists will rise to the top, and maybe people will be more judicious about what they buy. I don't think it's going to be big business as usual, and that's actually a good thing."

Seemingly unable to sit still, Lehr has continued creating through the quarantine, working on an optimistic new series she's calling From Kathmandu You Can Now See Mount Everest, and she plans to collaborate on prints with Orlando's Flying Horse Editions.

"At this age I'm always thinking about my work. So no matter what happens, the work is in the back of my mind," she says. But she's also found a certain serenity. "Even though I'm not unaware of what's happening, I'm reflective and quiet, and that's when new things happen. ... I want to work, I always work. It's just now, the frantic energy of producing is not as frantic; it's quieter."

"It's an idea of hope, that with caring for the planet more, things will clear up and we'll be in the new age," Lehr concludes, summarizing her current – and lifelong – artistic mission. "I'm just full of hope that something will turn around, and people will get planetary visions of a new earth."

– This story appears in the Aug. 12, 2020, print issue of Orlando Weekly. Stay on top of Central Florida news and views with our weekly newsletters.