Mmm-Pop! Molecular gastronomy doesn't get in the way of a good time at Sushi Pop 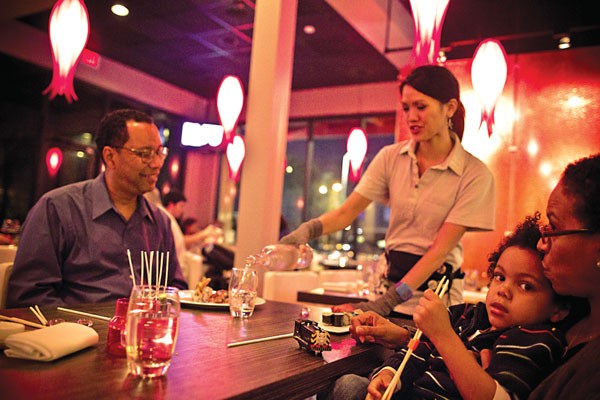 As Chau Mann sat in the parking lot that is West Mitchell Hammock Road during the evening rush hour, the idea to open a restaurant in the corner space of a strip mall off the busy street hit him like a neon-pink light on sleepy eyes. The heavily traveled road between state routes 426 and 434 in Oviedo could be a potential boon to business and, fortuitously, was just minutes away from the sushi savant's home. Of course, that would mean leaving his position as head blade at Shari Sushi and moving into a space that saw two previous eateries - Smashmouth Pizza and American Pie Pizza Company - fail. This was Oviedo, after all, not Thornton Park, and willfully opening a sushi joint in a space where other restaurants came to die would take a serious pair of kintama. Let it be known that chef Chau has a serious pair of kintama.

His restaurant sparkles like the glittered countenance of Namie Amuro. And while we didn't hear any of that J-Pop superstar's bubbly tunes, the space has no shortage of flair from the Land of the Rising Sun. Anime airs on flat screens and walls are splashed with manga, but fuchsia trumpet-blossom lights, backlit bonsai plants and wallpaper reminiscent of Hokusai's Great Wave underscore the thought Chau put into the design.

Another area Chau put a lot of thought into: molecular gastronomy. You'll find dishes flourished with blue cheese powder, marshmallow foam, jalapeño "noodles" and "eggs" made from coconut milk and mango puree. But novelty aside, it's the sushi that Chau elevates to high art. A simple, yet attractively rendered plate of sushi and sashimi ($33) offers an intoxicating choice of standards: buttery, market-fresh escolar, ruby-red tuna and vivid slices of salmon fanned over a mound of ice. Flounder is beautifully cut in the shape of flowers and set in a glass over ponzu-soaked daikon "stems"; imported soy sauce and wasabi make a world of difference. From the list of rolls, the "Hot Mess" ($14) presents superlative rounds of smoked salmon and avocado sweetened with maple soy. They're topped with baked tuna, salmon, flounder and yellowtail flooded in spicy mayo, and the whole scrumptious mess is garnished with smelt roe, scallions and rendered bacon. The "Hot Rock" ($15) allows diners to sear wagyu beef  ishiyaki-style, or on a hot stone. In this relatively intimate dining room, the resulting smoke drew wide-eyed stares our way, but it just added to the amusement. Even the shichimi-pepper-seared hamachi pop ($13), sanctioned by GM-sommelier-sake expert Michael Ring, roused Hello Kitty-like giggles: Each exquisitely fashioned lollipop came dressed with a dollop of guac, shiso and toasted garlic slivers on a plate drizzled with kimchi vinaigrette. Ring's sake recommendation, the jizake tenzen ($25), offered a complementary richness to the delicate fare.

Service can either be cheerfully unworldly or keenly urbane. The tableside production of peanut butter and jelly sorbet ($8) required supervision from Ring, particularly when our server administered liquid nitrogen to grape juice. Peanut butter powder, grapes and fresh cream completed the dessert, but the whimsical concoction fell a bit flat. While the house-made coconut ice cream impressed us, the coconut "noodle" was missing from the piña banana ($7) - a crisp, albeit staid, ending.