‘Monsters University’ almost as good as the superb original 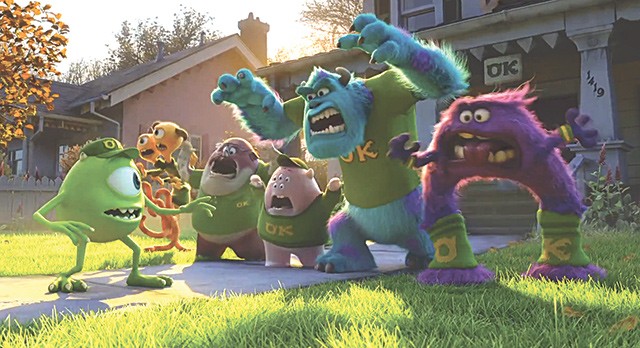 Second in the pantheon of Pixar pals only to Woody and Buzz Lightyear, Mike and Sulley have been absent from our lives since 2001. And though the new prequel to Monsters, Inc. lacks some of that film’s freshness and originality, the 12-year wait was worth it, as Monsters University is the leading contender for best movie of the summer and top animated film of the year.

Focusing on the characters’ college years, the film actually starts much earlier, when tiny Mike is on a school field trip. Seeing the scare floor at Monsters, Inc. for the first time, he realizes his life’s ambition: to be a scarer. Fast-forward several years and we find Mike, brilliantly voiced again by Billy Crystal, trying to fit in at the university, where he’s enrolled in the School of Scaring with his lizard roommate Randall (Steve Buscemi) and a seemingly overconfident oaf, Sulley (John Goodman), with whom he immediately clashes.

Much of the film’s first half is predictable, with all the college experiences one might expect: getting in trouble with the dean, joining a fraternity, kidnapping the “Scare Pig” mascot of rival Fear Tech and competing in “Scare Games” to prove your macho mettle. It’s Monsters, Inc. meets Animal House. But there’s still enough smart comedy and brilliantly detailed 3-D animation – some of the best ever – to keep everyone entertained. And, most importantly, writer-director Dan Scanlon stays true to the characters.

After getting the requisite hijinks out of the way, the movie turns into something more mature, something deeper. We glimpse the natures of the characters and what forged their relationships. For instance, Sulley, in a rare moment of vulnerability, tells Mike, “I act scary, but most of the time I’m terrified.” We also come to love a new slew of memorable monsters, including the intimidating Dean Hardscrabble (Helen Mirren).

In the end, Monsters University is not quite as good as Monsters, Inc., but that’s no crime, as the original was truly great. It’s also a step below the Toy Story films and WALL-E. However, discounting those movies, it’s still the best Pixar project since, well, Monsters, Inc.

Departing from the typical movie review, it’s important to reflect on Pixar’s accomplishments since its first feature in 1995. While some suggest that the company has lost its edge, citing the mediocrity of Cars 2 or the predictability of Brave, it’s human nature to try to find flaws in greatness. Admittedly, not every Pixar film can be Toy Story, just as not every Walt Disney film from 1937 to 1955 – a comparable period – was on par with Pinocchio. But Pixar has done something few other studios or filmmakers have: They’ve produced an uninterrupted string of aesthetic successes for 18 years.

I end with a reminder to arrive early and stay late. If you don’t, you’ll miss both The Blue Umbrella, the most stunningly photo-realistic animated short ever, and the little laugh that lies buried at the end of the credits. They’re just two more reasons Pixar remains a monster step above the competition.