More than 100 wildfires have scorched our 'abnormally dry' state, and it could get worse

The small brush fire had only spread through 10 acres near the border of Chuluota and Oviedo when Robert Yarborough got to the scene. The firefighter called in the blaze around 1:45 p.m. on April 8 and started working with a small crew from the Florida Forest Service and two tractor-plow units to contain it. Quickly, they realized they were outnumbered.

Within two hours, the brush fire had been whipped by the winds into a towering frenzy of flames and smoke that ran through 165 acres. More than a hundred people were evacuated from nearby Girl Scouts Camp Mah-Kah-Wee before it was charred to the ground. A lake slowed the inferno, but the breeze gave it strength to plow through in a scorching path toward homes in the Live Oak Reserve community. Yarborough and his crew had been joined by 150 firefighters, three helicopters, eight bulldozers and six engines to stand between the fire and further destruction.

"It was very extreme," Yarborough says. "Nobody ever got put in any danger fighting it, but it was very nerve-racking. At that point, you just fall back on your training and hope everything works out." 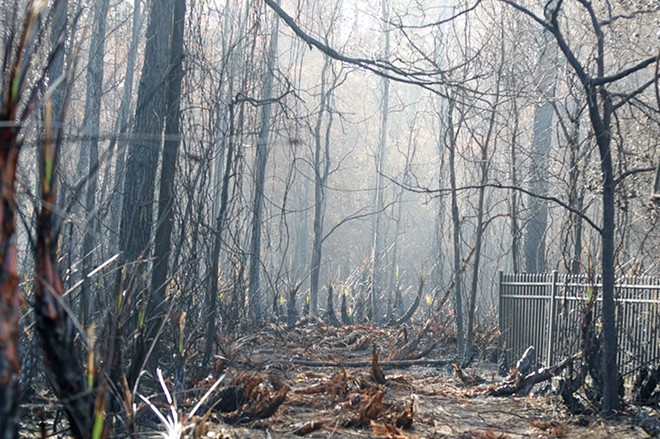 After working into the night, firefighters managed to stop the fire from burning down any houses, though it did get close – the flames licked trees and bushes that were inches from backyards into a blackened crisp.

Last week, Yarborough and a small crew were hosing down the final hot spots that remained behind homes to prevent a second fire. With ashes on his face, he looked up for a second and wondered aloud if the rain would come that day.

State officials have been pondering the same question as Florida's drought conditions continue to worsen, creating the dry ground needed to kindle small blazes into fiery rampages. Several fires have hit Central Florida already, including an aggressive 475-acre brush fire near International Drive and Daryl Carter Parkway that spread smoke along Interstate 4. Last Monday, a fire covering more than 7,000 acres in Naples was just 50 percent contained. In Orange County, less than an inch of rain has fallen in the past month and a half, and its surrounding counties are only slightly better. This has prompted a burn ban for Orange, Seminole, Osceola and 14 other counties.

The South Florida Water Management District has since issued a water-shortage warning for the 8 million residents living in its 16-county jurisdiction, which stretches from south Orlando to Key West. Earlier in April, Gov. Rick Scott declared a state of emergency after a rash of wildfires and the potential for more. Agriculture Commissioner Adam Putnam said at a news conference in Tallahassee last week that this is the most active fire season Florida has seen since 2011, with firefighters battling 106 active wildfires covering 124,000 acres.

And all this is before Florida's fire season peaks in late April, May and June.

Officials say people should expect more fires and further water restrictions as the state waits for relief via summer rains. While most people agree the drought is a recurring weather pattern, some climate experts and environmentalists have gone even further, saying warmer temperatures could intensify Florida's drought into something more dangerous.

"A year ago, we were having record rainfall, we had flooding issues, discharge issues – much of the state was dealing with the issue and the problems surrounding too much water," Putnam said. "And 365 days later, we find ourselves dealing with the problems of not enough water and drought. ... Extremes beget extremes."

Just how bad is Florida's drought?

It's not bad enough that the governor has asked people to pray for rain.

Back in July 1998, the dry season was so nightmarish it was described as "Florida's hellfire." Thousands of fires burned across the state, scorching more than 450,000 acres. Flagler County's 35,000 residents were all forced to evacuate. In a desperate moment, Gov. Lawton Chiles even banned fireworks and asked Floridians to "join me and pray for rain."

Florida's current drought has not reached that level. Not yet, anyway.

The U.S. Drought Monitor shows that parts of Central and Southwest Florida have intensified to a severe drought this month, with surrounding areas having a moderate drought. Chris Fenimore, with the National Centers for Environmental Information, wrote the latest report for Florida and says more places in Northeast Florida and the Panhandle are showing signs of being "abnormally dry."

"We're talking about 50 percent or less than normal precipitation," he says. "Typically with a severe drought, you can expect water restrictions and shortages, fires, and damaged crops and pastures."

Fenimore says severe droughts like the one in Central Florida usually happen once every 10 years.

The last rainfall to really hit Florida was in October, when Hurricane Matthew ripped through the state's east coast, says David Zierden, a professor at Florida State University who is also the state's climatologist. This past fall and into early winter, Zierden says, weak conditions from the La Niña climate pattern, which makes the Pacific Ocean cooler and Southern states drier, set the stage for Florida's drier winter. Lake Okeechobee, which had an overflow problem last year after a wet summer, has now dropped its water level below the minimum range.

"We're having a very active wildfire season, which is certainly concerning," he says. "But June will be the recovery month with afternoon showers. It should be a short-term thing if the summer rainy season is as good as usual. If the summer doesn't produce and we go through a normal dry season again next winter, that's when the problems will start to compound."

Water districts across the state are encouraging Floridians to use their water wisely. Bill Graf, spokesperson for the SFWMD, says that for now, residents should observe the twice-a-week watering restriction. If people don't voluntarily use less water, more restrictions could go into place and officials could impose penalties.

"When it's raining, there's less attention paid to it, but with this drought seemingly getting more entrenched, we want to encourage enforcement of those rules," he says.

The majority of the state's water comes from the underground Floridan aquifer. Graf says if the drought continues to intensify, the district can look at users with consumptive water permits and cut the allocation of what they're receiving. This can include golf courses, agricultural and nursery farms, mining activities and commercial users who pull water from the aquifer or other bodies of water.

While the drought is serious, Graf says, it probably won't severely affect the aquifer if people conserve water. Currently, the areas of Orange, Osceola, Polk, Seminole and Lake counties pump about 800 million gallons from the aquifer a day, a figure that remained relatively flat for almost two decades as more residents moved to Central Florida. Back in 2014, the Central Florida Water Initiative said Orlando was using as much water as it safely could from the aquifer, but the groundwater withdrawals were reaching the limits of sustainability.

"The Floridan aquifer is sustainable right now to pump about 850 millions of gallons a day, not more," Graf says. "With any real expansion of water use, we're going to have to rely on alternative service."

Residents should also be careful about accidentally starting fires, says Sean Gallagher, manager of the Orlando district for the Florida Forest Service. Don't throw cigarettes on the ground or dump the contents of your barbecue grill in the backyard. While that might usually produce no reaction, in this drought, it could start a fire. If you get pulled over or have to change a tire on a grassy roadside, turn off your car – the heat could provoke flames if it comes into contact with dry vegetation, Gallagher says. Certain areas, like homes surrounded by trees, can be more at risk because it's harder for firefighters to get through wooded areas when there's a fire.

"The drought is not going to necessarily cause more fires, but it does make it difficult to control," Gallagher says. "You still need something or someone to start a fire. It's not going to start by itself."

Florida's droughts appear to be cyclical, but climate experts and environmental advocates say warming temperatures may exacerbate the consequences.

Droughts are part of the state's normal climate pattern and have happened every five to six years for decades, says Leonard Berry, a Florida Atlantic University professor who doubles as the director of the Florida Center for Environmental Studies. But due to climate change, Florida is having more intense rainstorms and longer periods without rain in warmer winters.

Berry says a similar phenomenon is happening to the hurricanes that may come toward Florida. The number of hurricanes is not increasing, but we can expect the few hurricanes that hit the state will be more intense because of higher water temperatures. Hurricane Matthew smacked into the Caribbean and east coast of the U.S. last year, directly killing 585 people, including some in Florida.

Eric Rollings, chair of the Orange County Soil and Water Conservation District, agrees. In recent months, he's seen local lake levels drop dramatically. He lived in Orlando during the 1998 fires, and this drought reminds him of when "it seemed like the whole state was going to burn."

"Hopefully, it's not to that extent, but the thing is that when we don't have rainfall, consumptive use permits are draining more out of the aquifer, and you have warmer months, it's a recipe for brush fires," he says. "People are going to start using a lot more water, and we have to ask, are we going to see sinkholes after a month or two?"

"I mean, look at all the different weather patterns," he says. "These hurricanes coming through are huge. It's like everything is on steroids."

Rollings thinks people in Orlando may not know the area is in a severe drought, so he wants to get the word out.

"Don't wait for an authoritative body to tell you can't do something to protect your quality of life," he says. "Every day we need to work together and conserve our water and resources. [We] have 20 million residents and 100 million visitors every year, so we've got to protect that – when it's not there and the rules become more restrictive, you're going to notice."