Morgan Steele, the visionary painter, writer and personality about town, is gone too soon

They were everywhere. At the bar, at the Last Supper, masquerading as a penis. Morgan Steele incorporated Rativa, his long-faced Bizarro-World Mickey Mouse, into tons of the bold, cartoonish, provocative paintings he made by the hundreds, not to mention the stacks of 'zines and even novels he wrote. His creativity wasn't a stream of consciousness; it was rapids.

"He came out to Colorado on a Greyhound bus with this little mouse and it lived in his jacket," says artist Keith "Scramble" Campbell, noting that in the single month he spent visiting Campbell in Colorado, Steele spun out 70 paintings.

When this little pet died after two years, Steele went out drinking with the rodent pinned to his hat, and later "had his own little Native American wake for this mouse, and we got to attend it," Campbell says. (Rat's in peace.)

The eccentricity, the gentleness, the manic productivity, the environmental clean-ups, the rants and the rats are recurring themes when people talk about Morgan Steele. We lost this wild visionary in a car accident on April 23 and his passing drained a lot of light and color from our Orlando world, but oh, how grateful it made us for the many worlds he left behind.

Jef Shelby shares a photo of an 11-year-old Morgan putting on what might be his first art show in Miami in the 1970s.

"He had made little postcard-sized paintings and he hung them on a pole and served lemonade," says Shelby, Steele's most constant companion. The pair often sipped and scribbled at Austin's Coffee, which was coated with Steele's words and pictures.

"I'd be sitting there doing nothing, shooting the shit with him and he was drawing."

The documentation that took place at the Winter Park coffee house was constant and consuming: little notes like "Jim Morrison exposed himself for your sins" or "Never feed dog bones to chickens," and constant sketching that captured what author and photographer Gary Monroe described in Extraordinary Interpretations: Florida's Self-Taught Artists as "cartoon surrealism," threaded with "encryptions that, like hieroglyphs, appear codified and impenetrable."

His satirical edge, Steele told Monroe, was "from those years of reading Mad magazine."

With that as an influence it's hardly surprising his work was "never elitist," Campbell says, and neither were his prices, "so anyone you talk to, they don't have one painting, they have five paintings, they have 10 paintings. Shit, I've got 100 of them."

"Morgan's art fills my house – he made beautiful color out of the darkness of life," says Lindy Shepherd, former Orlando Weekly arts editor, who wrote about Steele in the Weekly's pages ("Morgan Steele lets it all hang out – and lets it all flow in") and subsequently hired him to do special projects for the paper. Steele illustrated Orlando Weekly's 2008 Best of Orlando issue (see previous page), and also the inaugural "You're So Orlando" issue; in both, his spot-on observations of his fellow Orlandoans are illustrated in exquisite detail.

"He worked at a remarkable speed," Shepherd says, and was "early for his deadlines, even if it meant riding his bicycle in the rain with his drawings tucked into his shirt."

THE GREAT AND SECRET SHOWS

But for all that creative drive, he avoided the bright limelight like a Mogwai.

"Most of my Morgan memories involve him being obstinately polite in public," says Watermark editor-in-chief Billy Manes. "I remember him like a shadow in most of the scenes of my Orlando life" – giving attention, but never seeking it.

He even painted surprises into people's lives some may still not know about.

"He would go to these hotels all over the country and he started to pull out the dresser drawers, paint the underside of them and put the drawers back," Campbell says of Steele's art show road trips.

However, Crescitelli says, when going about bookstore business, "I would find small manifestations of his art placed as bookmarks, tucked onto posters or taped on the restroom walls, all featuring his grungy mouse," which Crescitelli loved. As he loved Morgan.

"I considered him a resident artist, so he enjoyed the requisite occasional treat from the bar when he stopped by to rant about not being in a show." 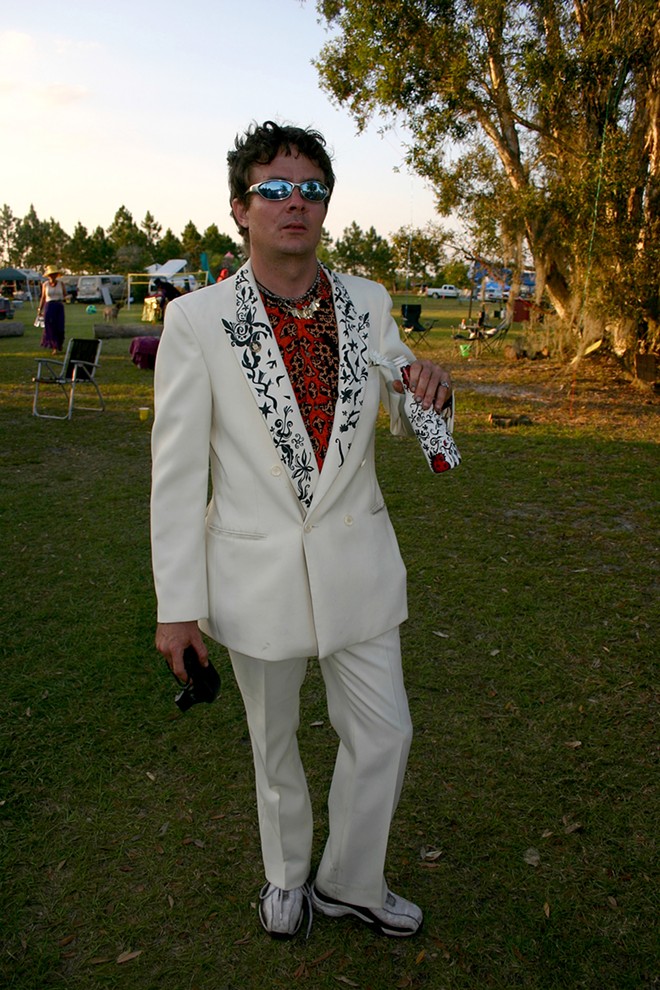 RANTING UNDER THE RADAR

Not craving the limelight didn't mean he failed to speak his mind.

"He's a ranter," says Scramble Campbell. "If something's going on he wanted to talk about it," in person or online.

"It would make me happy because it wouldn't be boring," says Steele's friend, artist and filmmaker Carl Knickerbocker, who manned a space adjacent to Steele's at the Mennello's annual Orlando Folk Art Festival (since renamed the Indie-Folkfest). "Morgan would be painting, ranting and selling. Painting on something and everything to kill the time between sales. Ranting against yuppies, complaining about art buyers who were cheapskates, bummed at perceived slights from certain women, vowing to quit painting and only write, and bitching about writing, and scheming to get out of Orlando. But at the flip of a switch, he would identify a bird, talk lovingly and respectfully of many artists and writers in town, or fondly recollect adventures on the road."

He was "a very good artist, an earnest environmentalist, an outlier and outsider in the very best sense," Knickerbocker says.

"He said he was addicted to Facebook," says Harriet Duncan, who often sold art alongside Steele at the downtown Orlando Farmers Market. "He became omnipresent, posting to everyone. It was like having your own personal Morgan. Duncan also enjoyed Steele's "Unofficial Hunter S. Thompson" Facebook page, an homage to one of his all-time heroes. At the moment, it can still be accessed at facebook.com/gonzovilleUSA.

Another great love was the band L7, whose logo he emblazoned on everything that didn't try to run away. He corresponded with the band, who acknowledged him as an "L7 Fan for Life." (He once showed Shepherd a handwritten note from Donita Sparks telling him that he was "on her shitlist," a prized possession.) The band commemorated Steele's passing, and his painting, on their Facebook page.

Steele had regard for those he loved and who loved him; he had no regard for convention. Often looking, well, disheveled, he'd come to Stardust Video and Coffee in bare feet, sometimes caked with mud from cleaning junk out of local lakes. He'd remove buckets full of plastic toys that he would write or draw on and turn into art.

"He'd make you look things in a different way. He was frustrated with how homogenized most people were," Shelby says, noting that his transformation of everything, every surface, into a means of expression extended even to his car, a used Jaguar.

"From day one he put a paint brush to it," says Steele's close friend of 23 years, Christine Spalding, for whom he was an inspiring big brother. Steele turned the yuppie status symbol into what it was, just an object, "just something else he could paint on," Spalding says.

Spalding recalls Morgan's prepping the car for the wedding of Billy Manes and Tony Mauss at the Acre in 2015, saying, "He spray-painted on the side of the car something like 'Going to a Gay Wedding!' and stuck a huge American flag through the sun roof. I guess we made a grand entrance."

COOL TO BE KIND

People were often wary of Morgan at first, but inevitably they'd find, along with the rats and the rants, that "he was kind in his core," Shelby says. He had suffered bullies, so he had a flinty edge, but he "was always kind to those who were kind to him," Shelby says. "You can be dirty and say 'fuck' every other word, but still be kind." The creator of Rativa also lived on and off at an Altamonte Springs bird sanctuary for several years, exchanging care for injured wildlife for a place to stay from friend and mentor Ann Young. He would even salvage plants from the trash, trying to reclaim anything that still had a chance, Spalding says.

Harriet Duncan recalls, "When I had to do the market without my partner, Morgan showed up to help me set up that heavy steel frame tent. When my cat was killed by coyotes during their rampage in College Park," the two of them set off "down the neighborhood streets, warning people who were walking their little dogs in the dark," she says.

"He was exactly who he was: uncompromising in his authenticity, enigmatic, cynical yet quixotic, eccentric, yet the person you could count on most," Duncan says.

Musician Jim O'Rourke remembers Steele saying that "molecules were like tiny paints and canvases that clash together and create art all around us." Since he did the same, that would qualify Morgan Steele as a force of nature.

I myself met this lovable weirdo in the early 1990s when we bonded as fellow fans of Hunter S. Thompson. He was generous and surprising to me from the beginning, and his ability to remain unmodified by the world was humbling.

"He wasn't after money or fame, he just loved making things from garbage and painting his brilliance on old pieces of fence posts," says artist Doug Rhodehamel. "He was the real deal, and I will miss him.