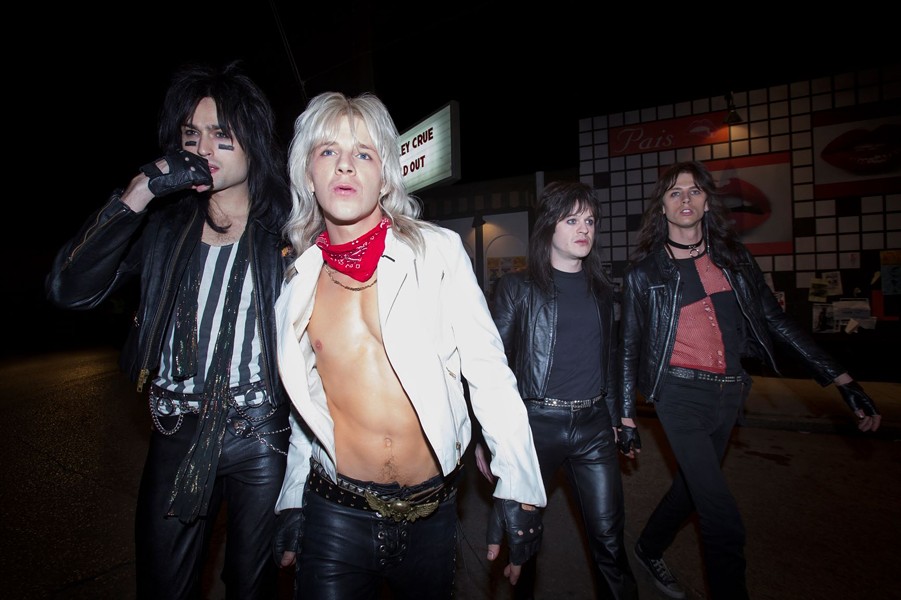 Image courtesy of Netflix
The Dirt
Streaming Friday, March 22, on Netflix
netflix.com
3.5 out of 5 stars

It’s almost as much of a miracle The Dirt exists as it is that the members of Mötley Crüe are all still technically alive. For years, attempts to make a film out of the group's best-selling printed memoir were stalled at the gate. A planned theatrical feature was to star a cast of big names, including Christopher Walken as band mentor Ozzy Osbourne. Whoever had that idea was shoveling more Bolivian bam-bam up his hooter than Nikki Sixx ever aspired to.

Finally, The Dirt arrives March 22 as a Netflix original. Like the Crüe itself, the finished product is more entertaining than actually “good,” yet occasionally not just good but great on its own lurid, anything-for-a-reaction terms.

An utterly bombastic voiceover by Sixx (Douglas Booth) sets the stage, telling how an ambitious young bass player arrived on the Sunset Strip bearing the scars of a broken home. (Watch for a cameo by Orlando’s own Avis-Marie Barnes as a concerned cop.) In L.A., Sixx falls in with three other misfits whose lust for fame is only equaled by their personal issues. And the rest is KISStory – I’m sorry, Crüestory.

Is the account “credible”? Not any more so than the book, details of which have been challenged by some supporting players and walked back a bit by Sixx himself, who would clearly like to avoid a #metoo tarring and feathering. But in both its printed and filmed forms, The Dirt cagily has the band members contradict one another’s recollections and sometimes even their own. All this while poking fun at their flagrant, sustained idiocy – a task that falls mostly to Tommy Lee, here played effectively by Colson “Machine Gun Kelly” Baker as an endearingly enthusiastic ADD case who uses “dude” like it’s his Pornhub password.

Those of us who obsessed over the Crüe saga in real time via rags like Circus and Hit Parader will appreciate the attention to surface detail displayed in everything from instrument models down to the Izod shirt perpetually sported by the band’s A&R executive, Tom Zutaut. The casting of Pete Davidson in the latter role is one of the movie's cleverest moves, since in real life, Davidson is about as close as you can get nowadays to actually being a member of Mötley Crüe: He bangs celebrities, he creates public controversy over essentially nothing, and he’s a poster boy for mental illness, which as fasionable addictions go is absolutely the cocaine of the ’10s.

Comparisons to a textbook Behind the Music episode are inevitable, but The Dirt holds your interest by consistently going just a little further than you expect. What could be drearily ordinary tales of debauchery on the road take on a certain charm — maybe even wit — through sheer audacity. A few omissions from the narrative, though, are curious and occasionally almost fatal. Most bewildering (except maybe to a lawyer), there’s no mention at all of Lee's marriage to Pamela Anderson, which incorporated so many now-essential elements of the Crüe’s image – including public sex, violence, incarceration and shitty piano ballads. Ignoring Lee's abuse of Anderson makes his earlier punching out of a mouthy girlfriend seem less like a harbinger of lifelong criminality than a momentary lapse effected by extreme provocation. Which is pretty criminal itself.

Moreover, glossing over the tumult of the Lee/Anderson years loses the friction that grew between Lee and singer Vince Neil (Daniel Webber), who was clearly jealous of his drummer's enhanced notoriety. Instead, the film hurtles toward a pat and rushed summation that rehab and a little bit of shared tragedy cemented the Crüe’s bond for all time, and that the last 20 years have apparently been a period of nothing but internal harmony. The book submitted a more nuanced and satisfying thesis that the group actually thrives on living in a constant state of falling apart, an observation that’s somehow both more mature and more rock and roll.

Like a sports car piloted into oncoming traffic by a wasted Neil, the movie version of The Dirt comes up suddenly and tragically short. But for a while, it’s a pretty fun ride.