‘Deepsea Challenge 3D,’ ‘The Hundred-Foot Journey,’ ‘Into the Storm,’ ‘Step Up All In’ and ‘Teenage Mutant Ninja Turtles’ 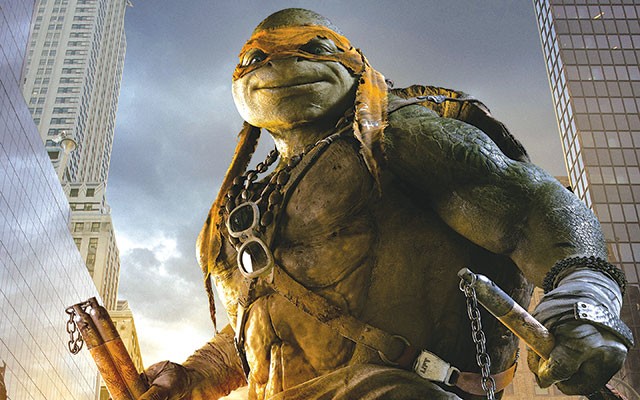 Deepsea Challenge 3D Yet another James Cameron undersea documentary, in which the King of the World shows us what it’s like to visit the deepest, most foreboding place on earth. OK, the second deepest and most foreboding – I forgot the office of Harlan Ellison’s lawyer. (PG) – Steve Schneider

The Hundred-Foot Journey Boy, there’s nobody better equipped to capitalize on the foodie phenomenon than Lasse Hallstrom, who has for decades been championing the feasibility of solving all of life’s conflicts by shoving stuff in your mouth. From Chocolat to What’s Eating Gilbert Grape to The Cider House Rules to Salmon Fishing in the Yemen, the guy can’t even make a picture without mentioning food in the title. Talk about obsessed! In Hallstrom’s latest, restaurateur Helen Mirren’s hostility toward a new rival (the great Om Puri) is overcome by the power of his entrees, which are just too damn good for anybody to remember what they were supposed to be fighting about. Fun related fact: In real life, obesity causes 300,000 deaths per year. (PG) – SS

Into the Storm If it’s 2014, it must be time for an ersatz Twister reboot, with another bunch of storm chasers boldly venturing straight into the thick of one of nature’s little shit Slurpees. If this thing is a hit, maybe Universal Studios can just slap a new logo on their Twister attraction instead of gutting it to make room for that Dance Moms Experience show I’ve been betting on for two years now. Fun fact deux: The director of Into the Storm, Steven Quale, co-helmed Aliens of the Deep, another of James Cameron’s deep-sea docs. Oh, how I love Ouroboros Week. (PG-13) – SS

Step Up All In The fourth installment in the Step Up franchise is an “all-star” edition that brings past competitors back together for a make-or-break dance-off in Vegas. Since my own experience with the “all-star” concept has been defined less by Major League Baseball and more by Project Runway, I’m hoping that somebody on the production team laid out for the biggest bus he could find, so the contestants have something nice and shiny to throw one another under. (PG-13) – SS

Teenage Mutant Ninja Turtles OK, this one’s an honest-to-goodness reboot, with Michael Bay the man in charge of introducing the heroes in a half-shell to a new generation. Michael Bay for the Jim Henson Company? It isn’t my idea of a nifty trade either. And somehow, Bay has brought along Megan Fox with him so she can play reporter April O’Neil – so much for our confidence that the abundant bad blood between them would relegate them to polluting the cinematic gene pool separately and individually. Honestly, it’s like watching East and West Germany reunite. Or the Eagles. (PG-13) – SS