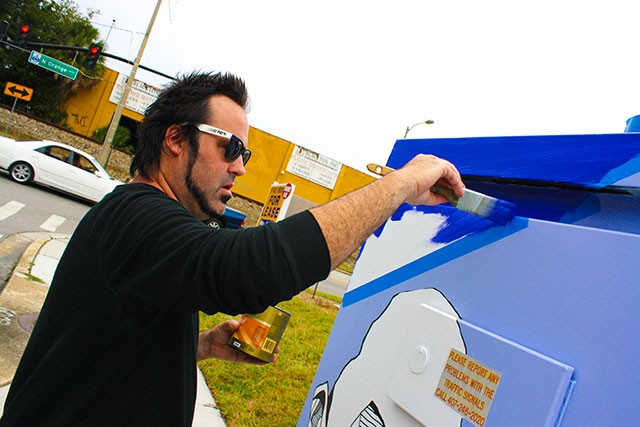 You know I’ve renamed it to ‘the IvanHOOD,’ right?” Andrew Spear asks with a laugh. “Peep the hashtags on Instagram!”

Spear is the boisterous large-scale artist and Ivanhoe resident who’s been tapped by Scottie Campbell, Ivanhoe Village Main Street’s executive director, to add a splash of urban charm to the cozy neighborhood via a series of eye-catching murals he’ll be painting on otherwise barren electrical boxes. In addition to providing something striking for passers-by to look at, Campbell hopes Spear’s murals will also prove a successful graffiti deterrent.

“The boxes usually attract taggers,” he notes, his dejected tone making clear how he feels about unauthorized street art. “And sometimes they even tag over the murals. There’s a special coating [we use], though – called ‘elephant snot’ – that allows us to wash away graffiti without hurting Andrew’s work.”

Campbell and the Ivanhoe Village Committee are currently researching what subjects from local history would work best under Spear’s colorful touch. Campbell believes Joyland, the early-20th-century water park built directly on the lake (and originally known as Russell’s Point, after pineapple magnate George Russell), will surely be included. Late actor Paul Wegman, celebrated in the area for both his pioneering drag performances as the whip-smart Miss P at the Parliament House and his turns as Ebenezer Scrooge in A Christmas Carol, is the focus of the first box Spear began painting, at the corner of Orange and New Hampshire.

“It’s really not that challenging,” Spear replies when I ask about the labor intensity of painting a utility box. “I don’t need a ladder or a scaffolding or even a hard hat, which is nice and comfortable. I guess the challenge is making the audience have more questions about their city’s history through the … responsibility I’ve been given.”

Works of this size for Spear only take four to five days to complete, depending on the exact size and level of detail, but a larger deciding factor is, of course, Orlando’s often fickle fall weather. Unexpected rainstorms have already stalled completion of the Wegman box (though even half-complete, the artist’s rendering of Wegman’s beloved visage is something to behold). Mother Nature’s fussing aside, Spear – who helps “finalize and funnel down” what subjects exactly he’ll be painting around the Ivanhoe Village district – can’t hide his enthusiasm when discussing this opportunity.

“It’s a great project to be involved in,” he stresses. “I love the Ivanhood!”

Campbell hopes to top off this mural project with 11 painted boxes, but so far funding (via local business and private donations) has only come in for three.

Here’s hoping it comes to fruition. Not only is our fair city in need of more officially sanctioned signature street art, the project’s subject matter helps (as national preservationist William J. Murtagh, an influence on Campbell, once put it) engage the past in a conversation with the present over a mutual concern for the future.