My Week With Marilyn

Michelle Williams leaves everyone else, even the film itself, in her dust as Marilyn Monroe 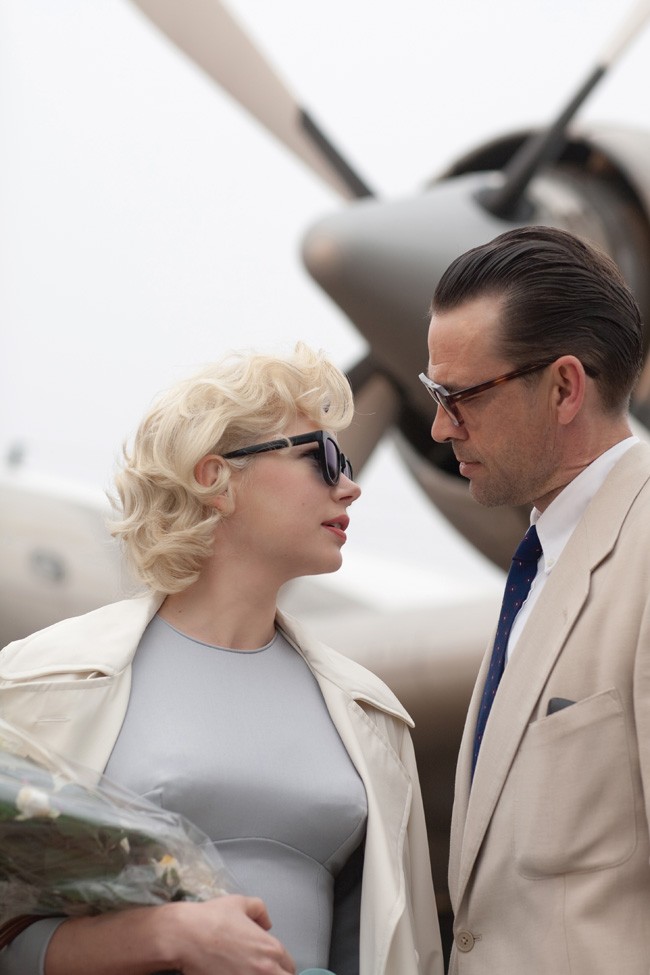 My Week With Marilyn

Michelle Williams deserves her vehicle; she’s earned the right to put herself in the sweaty hands of cigar-chomping moguls with the power to bully esteemed actors and directors into hopping aboard the Oscar Express, wobbly wheels though it may be resting on. As one of our best working actresses, she has every right to anchor that vehicle with a spot-on depiction of a real-life legend and all the red carpets, festival swooning and acceptance speeches that come with it.

As Marilyn Monroe in BBC veteran director Simon Curtis’ adaptation of author Colin Clark’s autobiographical remembrance of the time he talked his way onto the set of The Prince and the Showgirl and ended up assisting Sir Laurence Olivier on-set and aiding the newly Mrs. Monroe everywhere, Williams is luminous. Her Marilyn is an untouchable goddess who keeps no less than Arthur Miller (Dougray Scott) under her thumb, Olivier (Kenneth Branagh) at her mercy and every man who lays eyes on her at full attention. She totes around Method coach Paula Strasberg (Zoë Wanamaker) to act as her emotional spokesperson and throws her head back flirtatiously for the Queen’s wait staff as if she were Elizabeth I tossing bread crumbs at the starving, appreciative common folk. When she takes too many sleeping pills or pulls the emergency break on the film’s production at will, she makes herself small, cowering like a wounded puppy until anyone who dares tell her to get it together comes off like a monster. She’s Marilyn Monroe, for chrissakes, and she is also Michelle Williams. All hail the Queen.

Now, about My Week With Marilyn, the unwashed serf upon which Williams stands: What a mess. As it’s based on the memoirs of an unexpectedly important glorified P.A., Marilyn is scant on inside-baseball verisimilitude, opting instead for a boxed-in broad comedy in which everyone spits dialogue like they’re on a timer, and 90 percent of the action takes place inside a dressing room or within an interior set, and back and forth and back and forth. The only plot to speak of concerns Monroe’s inability to perform the most basic functions of an actress (memorizing lines, showing up on time, smiling for the fans) and Olivier’s inability to tell her what to do.

With its limited locations, inert plotting and over-the-top supporting performances, My Week with Marilyn feels cramped and, frankly, dumb. Watson is thrown away almost immediately, Ormond is confined to jealous asides and Redmayne never registers as the perspective point that Monroe treasured him for. And while I’m positive that Olivier was the sort prone to spouting Shakespeare to convey his emotions, it feels like a stale nod that it comes from Branagh.

But the prime culprit here can be found in post-production; Marilyn is edited to within an inch of its life. At a suspect running time of 96 minutes, it reeks of the kind of meddling its distributors, the Weinstein Co., are well known for: In every scene, we come in too late and leave too early; certain pivotal plot points are shown from nonsensically diverse viewpoints; and at least once – a long take of people walking down a corridor – there was actually a jump cut in between, as if editor Adam Recht (or whomever, really – for all we know, Recht was hogtied in a basement for the final cut) only realized halfway through the shot that it was overly long.

Yes, Williams is magical, but My Week With Marilyn is assembled as if it came straight from the titular figure’s own booze-and-pills-addled brain, and that’s not a place that’s conducive to creativity. Just ask Olivier.