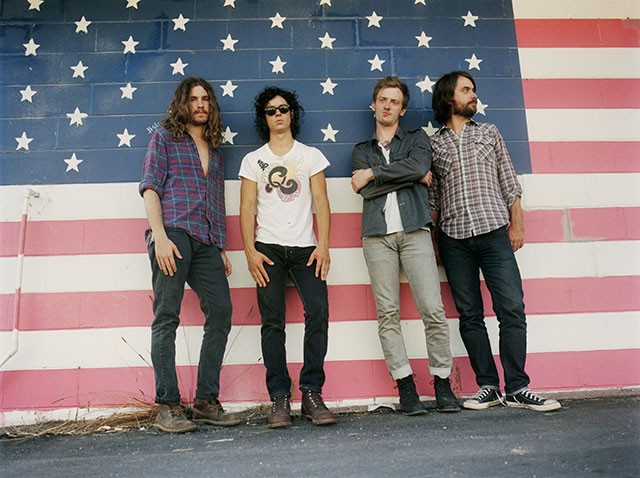 Since 2006, Nashville band Turbo Fruits has served as a sort of advance guard for the modern garage-rock scene. Before side projects were all the rage, a 17-year-old Jonas Stein ditched the playful brat-punk of his first band, Be Your Own Pet, to rage through 15 snotty, scabrous shitstorms of his own on 2007 debut album Turbo Fruits. Before drug-addled, beer-soaked, sex-crazed, Southern-fried bands like Natural Child earned a cult following, Stein was croaking about being “Naked With You” and lamenting the fact that “Mama’s Mad Cos I Fried My Brain” and there were “No Drugs to Use.”

Before mainstream publications were gushing about the current vinyl revolution, Stein and Turbo Fruits drummer Matt Hearn were cranking out collectible split 7-inches on their own Turbo Time Records imprint. And before themed cruises started clogging up Florida’s ports of call, Stein had the brilliant idea for the down ’n’ dirty Bruise Cruise free-for-all, which routed hundreds of good bands through Florida for two consecutive Februaries before sailing off into a severely hungover sunset.

But check yo’self before assuming that Turbo Fruits are just another band of hooligans intent on destroying themselves and the eardrums of their rabid fans. Each full-length has edged farther away from stoner garage rock, dabbling in ’70s boogie, countrified balladry and sparkly glam-pop; on “She Said Hello,” from 2012’s Butter, Stein even sang about “start[ing] a family with the girl of dreams.” And as the 26-year-old tells us, the Fruits’ forthcoming fourth album will continue that evolution.

“We did more writing for this album than Turbo Fruits have ever done, narrowing 30 songs down to 12 or so,” Stein says. “We had more time to be creative in the studio, so everything’s more delicate with more pop sensibilities.”

If you’ve ever seen Turbo Fruits live, “delicate” might not be the first word that comes to mind. But Stein says that after three years touring, eating, sleeping and (yes) drinking together, he, Kingsley Brock, Dave McCowen and Matt Hearn have finally coalesced into a tight-knit unit, something that was a challenge for him in years past.

“You definitely start to find a rhythm and a trust factor when you’re with the same people for a while,” he says. “Butter was the first album that everyone was involved in, and on it, we were trying to figure out how to work with each other. In some ways, it was an experiment to see what could come in the future. We threw out the negatives, ran with the positives and then worked harder than we ever have before.”

“Those types of shows, where there’s a celebration going on, are some of my favorites,” he says. “And I always like playing Orlando and Florida in general; in my opinion, it’s one of the more underappreciated territories to tour through. Since a lot of bands don’t make it down there, people are always ready to have a good time.”

But Stein adds that he and the Fruits are ready to do more than just have a good time. Although the upcoming record doesn’t have a definite release date or locked-down label situation yet, he hopes it can transcend the band’s reputation as hell-raising, road-loving miscreants.

“We’ve got a good rhythm of making a little scratch at home, touring and repeating, but ideally, it’d be great to amplify our career as Turbo Fruits into a full-time thing,” he says. “I’ve learned over the years that you never really know what will take, though, and you can’t expect anything to happen. The most important thing is that we’re proud of this next album. We’re never thinking about doing garage rock or chasing a sound. It’s best to just stay your course, keep your head up and feel good about what you’re doing.”

Three other ways to celebrate; weekend passes are $12