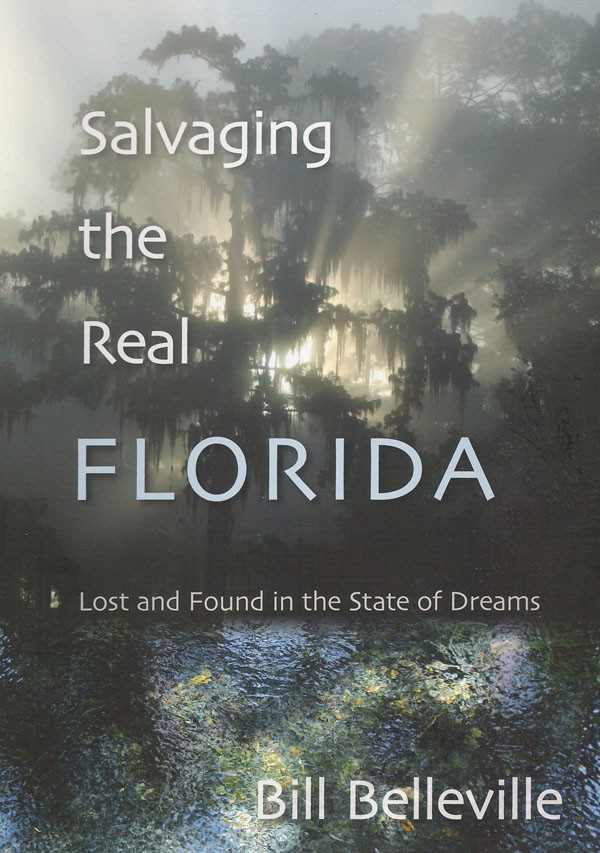 Salvaging the Real Florida: Lost and Found in the State of Dreams

In Salvaging the Real Florida, Lost and Found in the State of Dreams, Bill Belleville, a Sanford-based author and eco-filmmaker, attempts the near impossible: to get people off of their asses and out into Florida's natural places.

The book is a collection of essays spanning the swamps and hammocks, rivers and springs; it's a selection of easily digestible and approachable writings that document the places and things in Florida that hold a certain allure for Belleville.

This is not a trail guide or gear book; rather, Salvaging the Real Florida is the kind of book that will enthrall devotees of Henry David Thoreau and Ed Abbey, and even appeal to those who would rather not jump into a kayak at the crack of dawn just so they can see a majestic heron as it hunts its breakfast. Reading Salvaging the Real Florida is a bit like going on a field trip with your favorite science teacher: fun because you get to be outside and get your hands dirty, and wholesome because, despite your best efforts, you actually learn something.

The collection of essays isn't heavy on the guilt-inducing "get out there before nature is gone" diatribe, but it's impossible not to soak up Belleville's concern for a sustainable, healthy environment - especially for Florida's waters, which he says are being destroyed by development, misused and systematically polluted.

"At some point, every reasonable adult has to ask that question: How do we keep these things functioning the way they were always meant to function?" Belleville asks during a phone interview. In "What if the Shaman is a Snail," he examines how the tiny mollusks are a barometer for water health. He tells us there are some snail species that congregate around certain springs in Florida that aren't found anywhere else in the world. Belleville has his own collection of goldenhorn marissa snails that he's found during his travels, and he watches them in his home aquarium to see what they do. By the end of the essay, we learn that the little guys have a tough time outrunning the pollution that spills out of storm drains or the pesticides and fertilizers that seep into their domain. We're told that "future Floridians will pay for the contemporary sins of our water-sucking developers and their political toadies."

In appreciating natural places, we become better observers, Belleville says, and his essays are a relaxed study in observation. He describes sitting at the mouth of Mammoth Springs in full dive gear, some 30 feet under water, looking up at a glass-bottom boat full of tourists in the essay "Silver Springs: A Troglodytic Myth, Realized." Belleville accompanies his friend, a cave explorer, on a mapping expedition dive of the spring, a 100-foot slit in the bed of the Silver River that gushes about 250 million gallons per day. The discoveries in that cave are so ancient and real compared to those of the tourists in the boat. We can't help but think we'd rather be down there with Belleville dusting sediment off undisturbed rock in the hope we find something extraordinary.

The surreal bioluminescence of Haulover Canal in Mosquito Lagoon near Titusville has readers expectantly awaiting the odd glowstick-like light emitted by a certain kind of plankton at night during the summer in "Fire, Water, Friendship in the Night." As Belleville's group of friends slide their kayaks into the water and venture into the twilight, they're not looking to catalogue specific animals or accomplish physical feats - they're playing; pulling their paddles through the water to make illuminated eddies, watching the mullet create streaks of light as they dart under the surface and sometimes thunk into their boats, scooping up handfuls of water and letting it trickle through their fingers like liquid electricity. It's a bonus that they happen to see a pod of dolphins, a young alligator swimming beneath them and a manatee who greets Belleville with a benign snuffle.

"Regardless of how well a person writes or describes a place, I don't think that in itself ­- that narrative, that ability to describe a place - is not going to change a person's mind," Bellville says. "I think what it can do, in the best of worlds, is to have that person want to go outside and want to have  an experience."

Belleville grew up on the eastern shore of Maryland, but he got his first taste of Florida when he visited his grandfather in Wauchula, near Lakeland, where he worked as a produce buyer. Young Belleville remembers visiting Silver Springs, then one of the larger tourist attractions, and taking a glass-bottom boat ride. As he peered down into the clear water, he recalls thinking, "This is magical. I've never seen anything like this." As a young adult, he and his wife moved to Florida so he could learn the craft of news writing while living in his favorite place. "I always wanted to come back to Florida," he says. "I saw that magic in the landscape."

Belleville describes how, on a Saturday in early March, he led a group of people on a short hike as a guide for the Friends of the Wekiva River, a nonprofit that protects the Wekiva River basin, through the Rock Springs Run State Reserve between Sorrento and Sanford. It's a 27,000-acre track of public land where Belleville recently spotted a rare, carnivorous  pitcher plant.

His intention is to explain how the plant has evolved to lure insects. This encounter, he hopes, will motivate the hikers to create their own adventures. "I don't think we can appreciate a place until we know that place," Belleville says. These everyday encounters are what Belleville strives to show us in Salvaging. And although not all of us will recreate these scenes, it's nice to know that we can.