Alexander Payne’s new film is a journey not worth taking 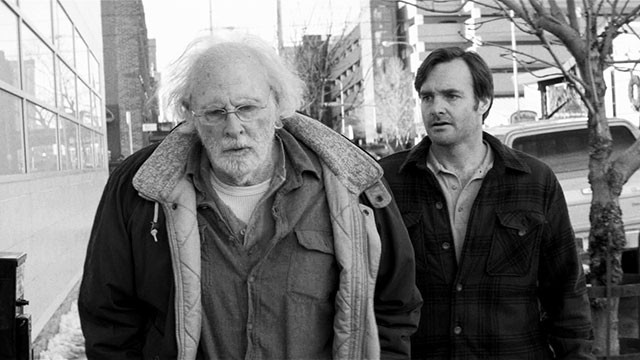 Alexander Payne has had a spotless record. He may not get the press of other top-notch directors, perhaps because he’s made just five features, but he should, because every one was a winner with an aura of originality. From Citizen Ruth and Election in the 1990s to About Schmidt and Sideways a decade ago up to 2011’s Oscar-winning The Descendants with George Clooney, Payne just doesn’t make bad movies. Until now.

Nebraska is a simple story of truth, trust and family. Woody Grant (Bruce Dern), an aging Midwesterner trying to suppress both alcoholism and dementia, is clinging to the one thing that gives him hope: the belief that he’s won a million dollars. Though we – and everyone else except Woody – strongly suspect that the prize is just another sweepstakes scam from a money-grubbing conglomerate, the old man believes that people should be taken at their word, and, as Mitt Romney told us, corporations are people too. (After all, Romney did win the Cornhusker State.) So, without a car and with no one to drive him, Woody sets off on foot from Montana to Nebraska to claim his winnings.

This misadventure doesn’t yield quite the same success as that of Alvin Straight, the protagonist of David Lynch’s The Straight Story, who journeyed on a lawn mower from Iowa to Wisconsin to visit his dying brother. Nope, Woody’s quest gets him only a mile at the most until his son David (Will Forte) plucks him off the road. But after another failed hike and the family’s inability to talk sense into Woody, David agrees to drive him. Along the way, the two re-establish a bond that time had weakened, meet up with friends and family they haven’t seen in years – including the pitch-perfect Rance Howard as Uncle Ray – and discover something about not just themselves but a simpler America that has slowly faded away. Call it the Midwest version of No Country for Old Men.

While it sounds like a recipe for melancholy magic, Nebraska wilts faster than cornstalks in a drought. Though Payne captures the small-town feel of his native Nebraska nicely, helped by Phedon Papamichael’s black-and-white cinematography, his film falls apart bit by bit thanks to forgettable writing, paltry performances and editing that saps humor, momentum and a sense of urgency. It’s the first Payne project he didn’t write, and that might explain the director’s unease with the material and the pacing, but Dern and Forte should take some of the blame too. Despite winning best actor at Cannes for this performance, the normally rambunctious, scene-stealing Dern can’t quite get a handle on Woody and struggles with Payne’s minimalist challenge to “give us nothing.” Forte, though surprisingly subtle here when compared to his sophomoric SNL persona, is also miscast, as is the unfunny, unbelievable June Squibb as Woody’s wife.

Nebraska wants to be a quirky, offbeat, deliberately paced dramedy with equally digestible portions of sweetness and wisdom, in the vein of a Coen brothers film. Instead, it ends up as the only blemish on Payne’s heretofore remarkable résumé.