The graphic novelization of everything continues with frame-by-frame food writing. 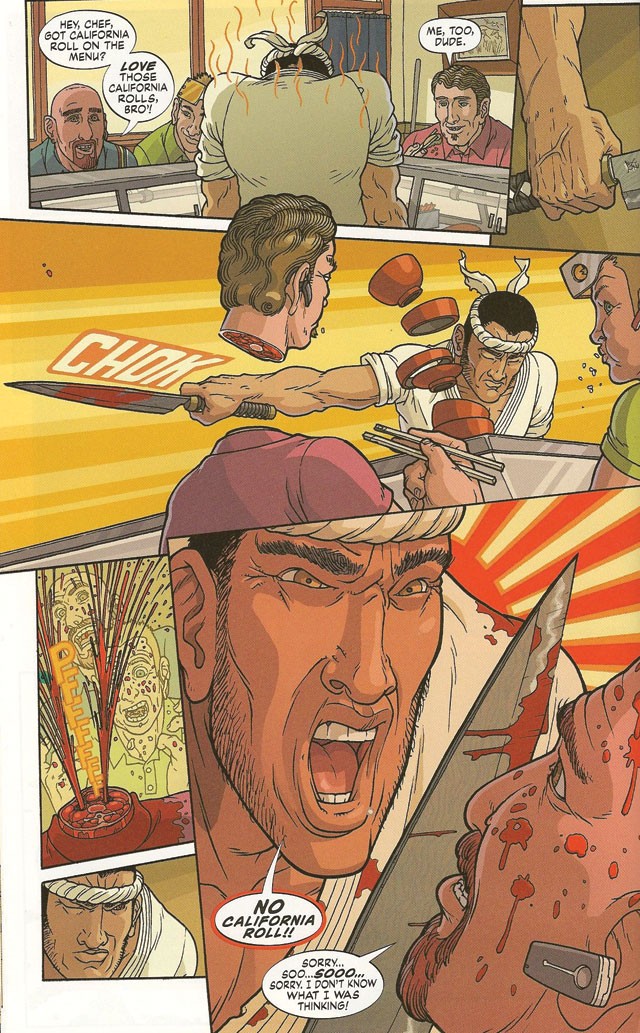 Both graphic novels and food writing have recently moved off the specialty bookshelf and into the spotlight, with regular attention paid by NPR and in national newsmedia to both trendy chefs' memoirs and tales told frame by frame, whether nerd fantasy or family history. (See: gushing coverage roughly everywhere of Prune chef Gabrielle Hamilton's Blood, Bones & Butter and "Dykes to Watch Out For" cartoonist Alison Bechdel's Fun Home.) Graphic novels have gained respect as a mix of sophisticated art and narrative, moving past their funny-pages roots, while food writing, once purely a niche interest of chefs and foodies, traded like samizdat or hunted on eBay, has also gained cultural currency in the past decade or so.

But both genres still have the sheen of novelty, or at least noteworthiness; you haven't truly arrived until no one makes a big deal of your arrival. And combining those forms into food comics is still unusual enough – in America, anyway – to merit a closer look.
A pair of recent books prove there's more of a connecting point between food writing and graphic novels than just fatty snacks scarfed while reading comic books. Anthony Bourdain and Amanda Cohen, both respected chefs, came to the table this summer with offerings that use the graphic form to impart culinary wisdom.

The newest entrant, claiming to be the first cookbook in comic form, is Cohen's Dirt Candy (Clarkson Potter, 2012), named for her East Village vegetarian restaurant. As a cookbook, Dirt Candy is less purely amusing than the kung-fu stylings of Bourdain's Get Jiro, but the obligatory bio/culinary philosophy section of the standard celeb-chef cookbook is rendered much more entertaining than usual here by Ryan Dunlavey's illustrations. Talented chefs are rarely also talented writers; rather than asking Cohen to describe her own frazzled nerves or obsessive nature in words, Dunlavey can portray her as a crazed monkey or draw her atop a literal mountain of chopped veg to communicate her emotional state. In one scene detailing a tough decision, Cohen is portrayed with an angel on one shoulder and a devil on the other, trading pros and cons; finally she snatches the angel out of the air, pops it in her mouth, chews and swallows (then wonders if she's still a vegetarian) – as tidy an illustration of desperation and self-doubt as I've seen, and certainly one she would have been hard-pressed to capture as neatly with only text at her disposal. Calling Dirt Candy the first graphic-novel cookbook is somewhat misleading, though; the recipes are presented just as in other books: headnote, ingredient list, step-by-step directions; though kitchen techniques are illustrated. The dishes do have one claim to comic-book fame, though: In this book "a lot of little recipes … all combine into one mighty mega-recipe" – just like Voltron.

Bourdain's Get Jiro (Vertigo, 2012) is full of sword-swinging, neck-lopping, blood-splashing action tempered by an obsession with "honorable" behavior: If you've ever seen a kung-fu movie (or a Western … same thing) you're familiar with the plot and resolution of this graphic novel. Bourdain's culinary know-how and passion for gangster-movie dialogue are complemented by co-author Joel Rose's sense of story and pacing, all ably supported by Langdon Foss (DC Comics, Heavy Metal magazine) and José Villarrubia's illustration. It's no coincidence that the protagonist, a ronin sushi chef in a food-mad future-dystopian Los Angeles, bears the same name as chef Jiro Ono, the brooding star of the documentary Jiro Dreams of Sushi – Bourdain is an avowed fan. Get Jiro takes aim at all of Bourdain's bêtes noires – locavores, vegetarians, sushi novices and the cleanliness-obsessed – while hewing to his love of classic chop-socky. It's an entertaining thrill ride that functions, like Looney Tunes cartoons, on two levels: Graphic novel fans can read it for the action, whether they grok the foodie in-jokes or not.

One could point to the long-running manga Oishinbo as the source of the trend; it's been published in Japan since 1983 (107 volumes and counting). Each book highlights one essential dish or technique (sashimi, gyoza, etc.), spinning an adventure narrative that somehow turns on the mastery of said dish. Between 2009 and 2010, Viz Media published seven English-language compilation volumes.

The Drops of God is another manga series, this one launched in Japan in 2004 and published in English translation starting in 2009 by Vertical Inc. The protagonist, the teetotal son of a famous wine critic, is ordered in his father's will to find 13 wines … so the plot is your basic multi-volume adventure series, but critics and wine enthusiasts from the New York Times to Wine Enthusiast have given Drops of God rapturous reviews for its soil-to-glass evocation of the grape.

Sara Varon's Bake Sale (First Second, 2011) is simplistic and very, very cute – suitable for young readers or Zooey Deschanel fans. It's a fairly basic story of baking and friendship starring Cupcake, a … well, cupcake who owns a bakery, and his friends Eggplant, Avocado and Brown Egg. It also bucks Dirt Candy's claim to be the first graphic cookbook; simple recipes are part of the book, and unlike Dirt Candy, they are in comic form.