"Through the next couple of days, I got to know Jerry a little, finding myself in the slightly uncomfortable position of being treated in a grandfatherly way by an unabashed neo-Nazi and anti-Semite."

"Slightly uncomfortable" positions are what Louis Theroux specializes in, and the above passage is just one of many moments of awkward self-reflection that occur in The Call of the Weird. Known best as a television host/documentarian (his Weird Weekends and Louis Meets … were phenomenally popular on the BBC), Theroux's reputation is built upon his ability to guilelessly infiltrate the outskirts of society – and appear completely self-conscious while doing it. His debut book chronicles his follow-up encounters with the people who populated Weird Weekends, and has Theroux spending six months traveling the hard-to-reach areas of the United States, talking to personalities whose extreme individualism makes them unmistakably American.

Of course, any book penned by a Briton who worked for both Spy magazine and Michael Moore is going to be a book shot through with mordant condescension, and it's difficult to avoid feeling that Theroux is secretly mocking his subjects. Whether they're prostitutes, striving rappers, motivational speakers or, yes, neo-Nazis, the pointedly worded (if morally ambiguous) questions he asks of the book's characters are clearly intended to define them in a certain light. (Usually stupid.)

However, we are talking about a Theroux, and Louis' father Paul is one of the 20th century's most esteemed travel writers. That sense of exploration in a faraway land is far more prevalent than any slumming superiority. Theroux often seems pleasantly surprised by the answers given to his questions and by the complex humanity present in even these seemingly one-dimensional fringe-dwellers. He gets manipulated by a brothel worker – "I began to see some merit in the idea of a massage," he says by way of explaining why he gave into her reluctance to talk, "I was struggling a little for material" – and dazzled by Ike Turner. His interactions with the vaguely cult-leaderish motivational speaker Marshall Sylver are particularly interesting, as Theroux is quite unambiguous about his animosity toward Sylver (who he calls a "reprogrammer of human beings"), but even then, he manages to be polite even when Sylver insults him. 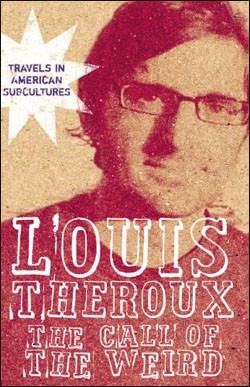 Like his father, Theroux doesn't equate "unfamiliar" with "scary," nor does he approach his subjects with wide-eyed equanimity. The blend of adventurous investigation and worldly skepticism that comes through in The Call of the Weird is unique and humane, resulting in a fascinating look at an America most Americans probably won't recognize.

The Call of the Weird
By Louis Theroux