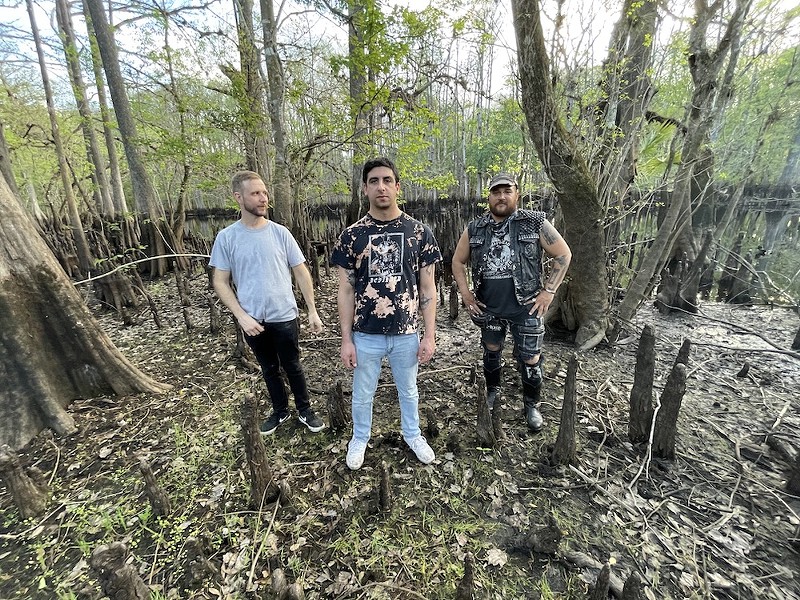 It takes some guts — in both the "gore" and "fortitude" senses of the word — to name your band after an album from Central Florida's death-metal glory days (Death's Human from 1991), but new Orlando band Human pulls it off.

The trio — all familiar local faces, with members having done time in volume worshippers like Android, Republicorpse and Cannabass — just released their grinding debut, Delicacies of Extinction, through Philadelphia label Silence Is Death (a label that has deep Orlando ties itself; more on that in a moment). The album sold out in a single day, with all proceeds going to Philly-area efforts "supporting Black lives and activists fighting for Black lives."

Human's sound is a punk-infused update of the classic Central Florida death-metal template. The band pukes up a tormented, urgent and dizzying sound in the spirit — if not the letter — of Death, Malevolent Creation and the like. In a somewhat death-metal-appropriate twist, Human came together during the pandemic, recording the album live in isolation. The band, their name and their music on Delicacies are not only a look back to a particular chapter in Florida's underground, but also a very modern commentary on the fragility of just what it means to be human during the darkest timeline. Orlando Weekly spoke to guitarist/vocalist John Farran aabout Human's nature.

Josh [Dulcie, drums] and I had been working together for a bit. Then with the pandemic, it worked out because the three of us were in the same pod. We didn't really hang out with anyone other than each other, and we played music the whole time.

Obviously the pandemic fucking sucked, but for the band it was good. I hate to say that, but ... It's funny too, because when we put out our release, there were a bunch of bands putting out their shit too. Maybe the pandemic was good for music — recorded music, at least.

How do you approach doing the death-metal style of vocals?

That's an interesting one because it's the type of thing where you have to condition yourself. For me, it's really funny trying to yell along with Eric [Montanez, bassist and vocalist], because Eric is one of the loudest people in general. It's ridiculous, and it translates so well to that style of vocals.

Half the time in practice we don't use a PA. He just yells and you can hear him singing even though we're playing out of full stacks.

How did you link up with Silence Is Death?

Jake Smith is the head of Silence Is Death and he's in Philly right now, but he's from here and he's been in a bunch of bands over the years. About 15 years ago the first local punk show I ever went to was a show by his band Black Bloc. Eric was in that band as well. So we have a long history. He started the label because he wanted to help Black folks out in Philly and it just seemed like a good thing to do and I'm trying to find a way to bring that here to our scene.

I like the melding of extreme metal with progressive politics. It goes back to Carcass, Napalm Death, Extreme Noise Terror ...

I've always really appreciated that too. It took me becoming friends with the punks here to learn more about that stuff, even though I've listened to Napalm Death and Carcass forever. ... There's so much cringey shit about metal, but you can't go to a metal show without seeing a Carcass shirt, and their politics never changed.

The tape sold out in a day?

Yeah, it was a pretty short run, but it was still cool. And all the money going to charities was great. I'm really happy about that. Hopefully we're going to do the second run soon, and we'll have them available locally. ... I'm going to find something local to donate all the money to.

What's next for the group? Promoters are starting to book for the fall, slowly.

We're already trying to write more music, and maybe put something else out relatively soon. God knows how long that'll actually be. ... Whenever it feels safe to entice people to come to a show, we're down. We definitely want to tour. It's looking like a lot of people are booking for fall, but we might wait for next year and just kind of play it by ear. There's no rush at this point; we've already sat out this long.