New streaming shows and movies this week: ‘Y: The Last Man,’ ‘Kate,’ ‘The Voyeurs’ and more

Doogie Kamealoha, M.D. — Child prodigy Doogie is both a girl and Hawaiian in this series inspired by the NPH classic. Shout-out to all my Polynesian 'ohana: In 20 years' time, it looks like we'll get to see Stitch co-host the Tonys! (Disney+)

JJ+E — The title of this Swedish teen romance stands for "John-John and Elisabeth." But wait a minute ... John-John? I thought he was saving all his love for Q. (Netflix)

Wu-Tang: An American Saga — In Season 2, the Clan try to rehab their reputation after that whole Martin Shkreli debacle. The bad news: Their big idea is selling the only copy of their latest record to a guy who made his fortune on horse dewormers. (Hulu)

Blood Brothers: Malcolm X & Muhammad Ali — Cultural critics, activists and former confidantes of both men help form a documentary portrait of the three-year friendship between Brother Malcolm and the Champ. It's like One Night in Miami, but on a budget. (Netflix)

Martyrs Lane — A neglected young girl begins to unpack some hard truths about her family when she strikes up a friendship with a strange tot in angel wings. There you go again, JonBenet, gettin' up in everyone's business! (Shudder)

Come From Away — Original and current cast members appear in a filmed version of the Broadway hit about good-hearted people who help one another through a terrible crisis. Boy, don't you love science fiction? (Apple TV+)

Kate — Mary Elizabeth Winstead plays an assassin who has a lot of scores to settle after a poisoning leaves her with 24 hours to live. See, when it happened to Homer Simpson, all he cared about was giving Marge the high hard one. (Netflix)

Lucifer — When last we left Old Scratch, he had been anointed the new God, which seems to portend plenty of hijinks for his sixth and final season. I mean, if he still isn't too busy managing Ghost and stuff. (Netflix)

LuLaRich — The documentary filmmakers who chronicled the collapse of the Fyre Festival poke their noses into LuLaRoe, a multi-level marketing scam that exposed the vulnerability of independent retail. Gee, I'd almost think there was some kind of schadenfreude going on here, given that the thing's being brought to us by AMAZON. (Amazon Prime)

Malignant — Director James Wan has been calling his latest flick, which shows a pair of sisters investigating some particularly unsavory killings, "the horror version of Frozen." So instead of "Let it Go," we're going to get "Imprison It in Your Basement With a Hacksaw and See What It Do?" (HBO Max)

Metal Shop Masters — Professional welders get their very own Great British Bake Off in a competition show that has contestants forging elaborate constructions out of steel, iron and other super-hard substances. Come to think of it, ever eat English food? This just might be The Great British Bake Off under another name. (Netflix) 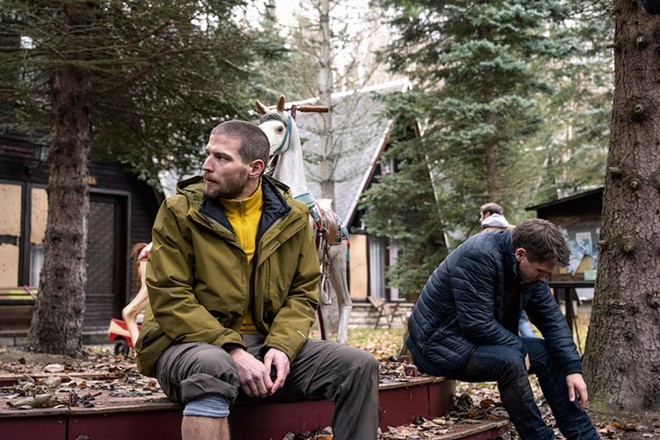 Prey — Five guys go on a hiking trip as part of a bachelor-party weekend, only to discover they're being hunted like animals by some loony with a gun. I knew something like this would happen when we let them close the Booby Trap. (Netflix)

Y: The Last Man — The eagerly awaited live-action version of the DC comics series casts Ben Schnetzer as the last living human with a Y chromosome. Now maybe Tucker Carlson will stop acting like it's going to be him. (Hulu)

The World's Most Amazing Vacation Rentals — Season 2 takes us to yet more fantastic destinations we're all going to want to run out and visit. (If we ever overcome our deathly fear of people, places and things.) (Netflix)

You vs. Wild: Out Cold — His latest interactive adventure finds Bear Grylls stranded in icy terrain and suffering from amnesia to boot. Now's your chance to convince him he bought you that Wu-Tang album! (Netflix)