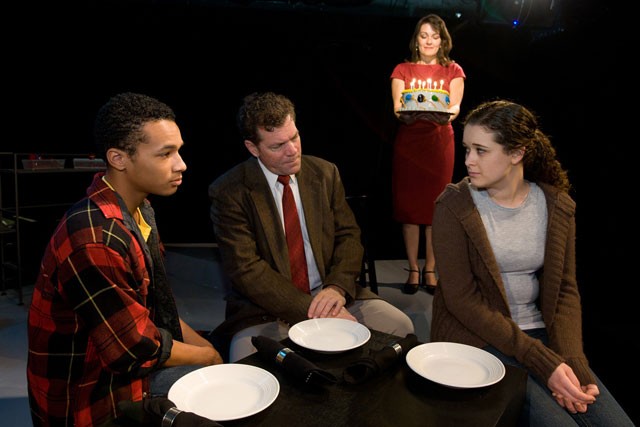 Meet the Goodman family, your perfectly normal all-American neighbors next door. Dad Dan (Stephan Jones) is an affable architect; Diana (Melissa Minyard) is a stay-at-home mom; teen daughter Natalie (Emily Walton) is busy practicing piano for a college scholarship, when not being distracted by her boyfriend Henry (Damian Barray). There's only one flaw in this carefully Photoshopped family portrait: Diana has more mental health issues than your average sexually frustrated soccer mom.

"Manic-depressive" doesn't quite cover Diana's kind of crazy; suffice it to say she suffers from a propensity to build cheese-sandwich pyramids on the kitchen floor, and even her rock-star doctor (David Shipman) can't keep her from hallucinating about her long-dead son, Gabe (Brandon Allen Wood). In Mad Cow Theatre's new production of Tom Kitt and Brian Yorkey's rock musical Next to Normal, you'll tumble down the rabbit hole with Diana and her family on a deeply affecting, if ultimately frustrating, journey.

Though it won Tony and Pulitzer awards on Broadway, and has attracted a cult of vocal evangelists, I came away unconverted after seeing an earlier local production. In this version, however, director Timothy Williams (The Understudy) has drawn out the emotional complexity in Yorkey's book and assembled a cast with the pipes to do Kitt's score justice, even without microphones.

Minyard, a Les Miz Broadway vet, is a marvel as the mercurial main character, capable of snapping from brazen to broken in a heartbeat. Jones takes a powerful baritone and bends it up to a tender tenor; his silent sobbing during Diana's swan song is one of the strongest bits of silent acting I've seen all year. Walton is believably unmannered as a straitlaced teen skidding into oblivion, and Barray made me believe his sunny stoner was the soberest person on stage. And as the ghostly Gabe, Wood appears as wholesome as apple pie, but oozes poison under the crust.

Scenic designer William Elliott has provided a compact collection of monochromatic platforms, mostly barren save for some stools and a vase of white flowers. It's left to Erin Miner's lighting to supply the sometimes lurid colors and suggest scene changes. Williams' direction is equally efficient, allowing characters to simply sit still and sing without ever appearing uncomfortably static. And kudos to musical director Philip King's tight three-piece band, which lends a little rock & roll kick without overwhelming the often intricate lyrics.

In conclusion, Mad Cow overcame every reservation I could raise save one: the ending. (Spoilers ahead: Stop reading now if you don't already know – or don't want to know – the conclusion of Next to Normal.) In a show so lauded for its "realistic" look at mental illness, the idea of Diana abandoning her family and treatment in favor of idealized independence feels bafflingly dishonest. I'm waiting for an accurate epilogue in which our heroine turns up in jail, a homeless shelter or the morgue.