He’s not exactly of the same breed as the Archies, but Nobunny’s bubblegum pop is just as catchy, although typically raunchy. What did you expect from performer (Justin Champlin), who prefers “it” with his mask on – and his signature bunny mask is only part of the kinky props he brings to the stage. His upcoming gig on Valentine’s Day is a quirky enough coincidence to draw the more adventurous lovers out, as well as the black-hearted folks avoiding sentimentality.

His numerous releases carry a mutated torch for love songs, which is evident enough from certain album names like Love Visions and Raw Romance. In honor of the holiday, we created these valentines featuring lyrics from these albums, as well as last year’s release Secret Songs: Reflections from the Ear Mirror. Dole them out to your loved ones, or if you’re as brashly suggestive as Nobunny, to anybody you wanna pretend you’re bunny rabbits with. 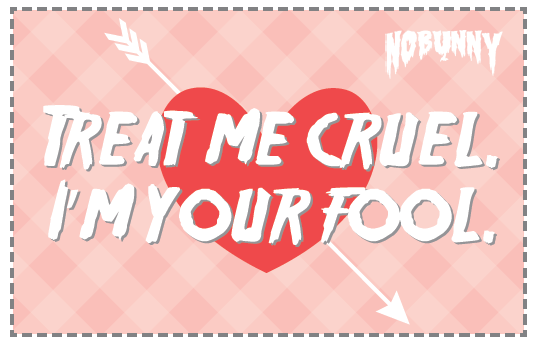