Our favorite tastes from around town 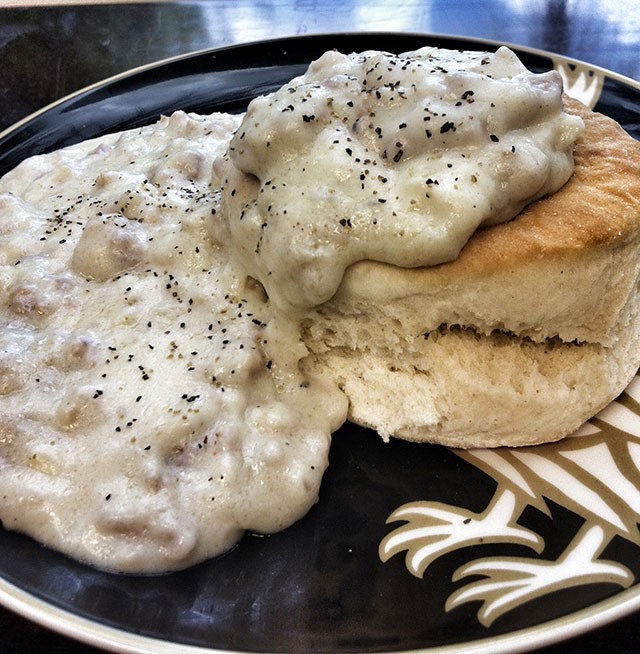 Sausage gravy and biscuits, $2.98 for a half serving (which, unless you want clogged arteries forever, is plenty for one person) from Daybreak Diner

Nothing is less appetizing than a bad plate of sausage gravy poured over a sad, dry biscuit. And it seems like a dish that’d be tough to really mess up, but I’ve had far too many plates of bland, pale sauce flecked with sparse clumps of overcooked sausage that nobody thought to drain the grease from before adding to the gravy. What a pleasant surprise to find that this unassuming neighborhood diner on Curry Ford Road knows how to do sausage gravy and biscuits. The gravy is creamy, not gelatinous at all, even after it’s sat around for a bit. It doesn’t just let the fact that it’s a cream-based dish do all the work – instead, it’s lightly spiced and almost infused with sausagey goodness. It even has just the tiniest bit of cayenne kick to keep it from straying into that cloyingly rich territory that’s the downfall of many cream gravies. And the sausage – I have no idea where the Daybreak Diner gets its sausage crumbles, but they’re perfect. Heavy on flavor, light on grease and no trace of that foul Fry-o-lator aroma that ruins good meat. The biscuit … well, it’s a perfectly respectable biscuit, but really it’s just a vehicle for the sausage gravy. As long as that part is correct, I can forgive any number of
biscuit sins.