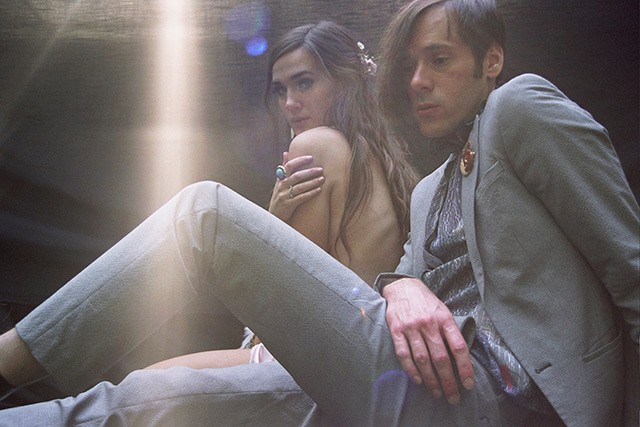 OF MONTREAL with Boogarins

Put electro-funk, glam-rock, twee-pop and whimsical psychedelia into a blender, press the chop and liquefy buttons simultaneously, and you’d still only have a small glimpse at the 20-year career of Athens, Ga., band Of Montreal. Fronted by Kevin Barnes, a flamboyant yet demure master craftsman of literate, danceable tunes, Of Montreal’s backing band has cycled through a rotating cast of prominent musicians from Athens’ Elephant 6 collective.

But that endless cycle of creativity matches Of Montreal’s variegated 12-album, 16-year discography. Where 2012’s Paralytic Stalks was punctuated by challenging dissonance and micro-tonality – what Barnes described to Orlando Weekly as “something that’s definitely in no way conventional pop” – 2013’s Lousy With Sylvianbriar, written solo during a self-imposed retreat in San Francisco and inspired by the work of Sylvia Plath, veered into country-influenced garage-pop territory.

And new Of Montreal material? “In the past I’ve taken inspiration from ’70s funk and ’60s Baroque pop, but recently I’ve found an interest in contemporary music,” Barnes says. “I want to do a similar writing retreat somewhere in the world and create something that feels more futuristic and forward-reaching – not retro. I don’t think it will have anything in common with Sylvianbriar.”

One similarity any upcoming album will have with Of Montreal’s past work is verbosity. Starting with 2001 record Coquelicot Asleep in the Poppies: A Variety of Whimsical Verse, Barnes has chopped and screwed his ornate take on the English language into some of the most memorable titles in music history: “Death Dance of Omipapas and Sons for You.” “Eros’ Entropic Tundra.” “Triphallus, to Punctuate!” “Malefic Dowery.” “Hegira Émigré.”

As Barnes says, “I’m definitely a fan of the written word, and I’ve always had a thing for titles. It’s just another chance to do something creative; obviously it’s not commercially palatable to name a song ‘Heimdalsgate Like a Promethean Curse,’ but it’s more fun.”

For all their linguistic absurdity, each of the above songs rock the hell out – perfect for strutting, jamming, tripping or just dancing. That free-for-all spirit is reflected in Of Montreal’s elaborate stage shows, which Barnes says will remain another constant even as each tour’s playlist changes. “The live show stays fairly consistent as for the visual elements, theatrics and costume changes. The only difference is the music is more dynamic – moments of anthemic pop, dance music and glam rock, but also with a quieter, more intimate element to the show.”

Barnes says such intimacy, highlighted by a recent one-off New York City solo show during which, he says, “[I] made myself bare,” is paramount to Of Montreal’s music. “Vulnerability is important. The artists that resonate the most with me are the ones who put themselves out there in this fragile state of not hiding anything – not being self-conscious but laying everything out and bringing everything to the surface. That’s been my goal, especially recently.”

Other goals for Barnes and Of Montreal as the band nears its 20th anniversary? Touring hard – between May 2-18, they’ll play 17 consecutive shows everywhere from Little Rock to Buffalo to Orlando to Cincinnati. (“Days off are expensive,” Barnes says. “I’d rather put my nose to the ground and get in the groove where you don’t feel tired because all you’re focused on is rolling the boulder up the hill.”) Yet the 39-year-old doesn’t seem dismayed by such a longtime struggle. “I have a restless creative spirit,” he says. “If I stumble on some inspiration, I’ll get excited, but it only lasts a couple of months.

Then I get bored and start searching for something new. I live in constant fear of repeating or becoming a parody of myself.”

Which means Of Montreal might never stop expanding sonically. “Part of the reason why I keep putting out records is because I’m unsatisfied with whatever I’ve accomplished – and always hoping the next thing will be a masterpiece,” Barnes says. “It’s not healthy for someone to feel like they’ve done something great or have nothing to prove. Every time I take the stage, I feel like I have a chip on my shoulder – something to prove to myself or whatever invisible deity is watching me. That’s what drives me.”