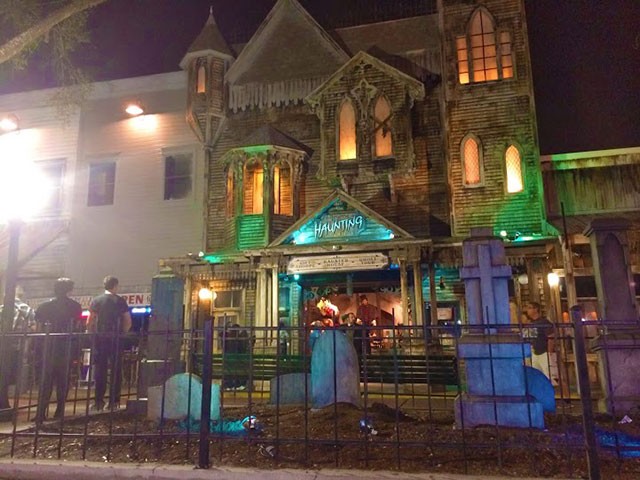 Is anyone who reads my column knows, Halloween is easily my favorite time of the year. But there are still more than six long months to go until 2014’s spooky season, and while I enjoy Orlando’s haunted attractions for their ingenious effects and enthusiastic actors, it’s exceedingly rare for one to startle me, much less send a genuine shiver up my spine. Thankfully, the same cannot be said about the new Haunted History tour now being presented by Legends Dark Amusements, the same folks who resurrected Old Town’s defunct Grimm House late last year. Unlike Legends’ year-round A Haunting at Old Town walk-through attraction, there are no grease-painted scareactors or gory animatronics to scare you on this excursion – only good old-fashioned (and allegedly genuine) ghost stories.

The Old Town Haunted History walking tour, which will be conducted on Tuesday and Wednesday evenings during the off-season as well as weekend late nights at peak times, is the product of two men’s longtime passion for pursuing the unexplained. Michael Gavin (aka “the Paranormal Paparazzi”), who has decades of experience with horror-themed entertainment and ghost-hunting groups, helped research and write the 90-minute tour. Legends co-owner Dan Carro, who portrays the haunt’s patriarch Archibald Ashdown and led the exclusive media preview I experienced earlier this month, contributed personal tales from his experience working in many of Orlando’s fabled haunted attractions, including the late, lamented Terror on Church Street and Skull Kingdom.

So why stage a survey of supposedly “real” spirits inside a blue-collar tourist trap like Old Town? Was the Kissimmee complex of cut-rate gift shops and carnival rides built on top of an ancient Indian burial ground? Were a slew of ghastly murders committed there? In a word, no. But as Carro says, as a long-running attraction the area has drawn hundreds of thousands – both living and dead – and perhaps some of their presences remain even after they have departed. After all, as Carro half-jokingly suggests, “We are all ghosts; we’re just still using our bodies!”

I’m a cynic at heart, so I can’t say my stroll around Old Town turned me into a true believer. And I promised Carro I wouldn’t divulge all of his tour’s spirited secrets, but here are seven freaky facts I learned during our voyage into the netherworld. If you’ve got $20 and a free evening, take the trip down to 192 and decide for yourself if there’s really a portal there to the great beyond. Just be warned – though some guests have reported experiencing a ghostly presence, supernatural sightings “are not guaranteed.”

No. 1: The Old Town Portrait Gallery, where guests can be photographed in old-fashioned costumes, has been a staple of the complex since 1986, and original owner John Howard Thompson still stops in regularly. The only catch is that he died in 2005. Employees report seeing hats and other objects fly off shelves, but they find his prankster presence comforting rather than frightening.

No. 2: Two Old Town security guards have heard the Windstorm roller coaster making loud banging noises at 3 a.m., long after the ride was powered down for the night. When they went to investigate, the gate, which was ajar, slammed shut and latched itself without anyone touching it.

No. 3: Terror on Church Street featured an animatronic clown figure named Zelda, who had a habit of coming to life even after its electricity had been disconnected. And the attraction’s attic scene effects went haywire one night after an employee had been playing with an Ouija board.

No. 4: Despite being a modern manufactured building, Skull Kingdom was supposedly haunted by an aggressive three-fingered spirit that left distinctive scratches and bruises. A female guest was once grabbed by a phantom hand that left visible indentations of fingerprints on her face.

No. 5: The photographs in Legends’ first stairwell are authentic Victorian post-mortem pictures. It was a popular pastime to take photos with recently passed relatives, using metal armatures to prop them up in lifelike poses. You can tell which ones are the corpses because they are in focus; live people would blur in early photographs because they breathed.

No. 6: Ashdown’s office features patents and blueprints for coffin alarms, intended to defend against accidental live burial. There is no record of anyone being rescued by one, but they gave us the phrases “dead ringer” and “saved by the bell.” The office also sports a pendulum clock that began swinging on its own while we watched, without anyone touching it.

No. 7: Multiple actors have felt the presence of a “dark man” or a lost child while standing in a narrow backstage hallway. Ghost hunters who investigated the area found that all their detection equipment had mysteriously failed. I can’t say I saw anything myself, but standing in that spot sure gave me the willies ….