OMA is almost 100 years old; we discuss the last 25 with curator Hansen Mulford

Photo by Hannah Glogower Scenes from the opening of the 2015 Florida Prize in Contemporary Art, with work by Alex Trimino in the foreground.

The Orlando Museum of Art celebrated its 90th anniversary in 2014, and this year issued an ambitious vision plan, "Forward to 100." On the occasion of Orlando Weekly's 25th birthday, we checked in with curator Hansen Mulford, perhaps the only current OMA staffer who's been at the museum for the past 25 years, in hopes that some of the museum's longevity, versatility and wisdom would rub off on us.

Orlando Weekly: What was the biggest exhibition at the Orlando Museum of Art in the last 25 years?

Hansen Mulford: Imperial Tombs of China (1997) was the largest in size, budget and attendance. This exhibition was organized in partnership with Wonders, the Memphis International Cultural Series, with all artwork coming from museums throughout China. It was a classic blockbuster exhibition of the 1990s. The extraordinary costs of these types of international blockbusters have made them rare in the past decade or so. The Art of the Motorcycle (2006) was another blockbuster-style exhibition, large in size and accompanied with thematic exhibition elements. This was organized in partnership with the Guggenheim Museum. It was conceived as an “outside of the box” exhibition for an art museum. Every morning at 10 when the museum opened I would hear the rumble of motorcycles coming into the parking lot.

More significantly, though, in the past 25 years [OMA] presented over 125 temporary exhibitions, both organized by the museum and in partnership with other museums, and dozens of thematic exhibitions from its growing permanent collections. To bracket this period, 1990 began with Orlando Museum of Art-organized exhibitions Alex Katz: Painting, Drawings and Cutouts and Washington Color Painters: The First Generation. In 2015 the Museum organized one of its largest exhibitions, Maya Lin: A History of Water, and presented the second annual Florida Prize in Contemporary Art.

Do you feel art museums across the country in the 1990s were more focused on those kind of displays of cultural artifacts as opposed to traditional visual art?

The blockbuster is definitely a special genre of museum exhibitions with its own history. Historically they were intended to reach large audiences, bring visitors into a region and have an economic impact. They are not as common in the past decade for many reasons, among them that the high costs are not always recovered by attendance and gift shop sales. Like any other entertainment-oriented production, there are risks that a big audience will not show up.

The other part of your question may be that art museums in the past 25 years have been much more thoughtful about seeking ways to reach new audience by being relevant to community interests, providing a greater range of choices to address varied interests, providing a lively and welcoming environment, providing a variety of programs and events that are educational, social, entertaining, inspirational, and so on. There was a thought in the ’90s that museums would lose audience because everything would be on the Internet. That has not happened. Some experiences require your presence in body and mind. 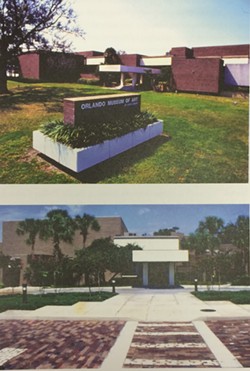 In the 1990s, were there any significant changes at OMA?

The decade was a period of dramatic growth for the Orlando Museum of Art. The Museum’s present, approximately 80,000-square-foot facility was built in two phases during this period. The period since 1990 has also seen the permanent collections more than double in size. This growth is the result of people in our community that have provided financial support through the Museum’s Council of 101, Acquisition Trust and Friends of American Art, along with many gifts of art from individuals.

It is interesting to note that the population of the metro Orlando region in 1990 was about 1,200,000 and today it is about 2,100,000. Numbers like this hint at the many striking changes that have occurred in the region in the past 25 years. The cultural community in Central Florida today is a world away from what existed in the 1980s.

The Acquisition Trust was active at this point – what were some of the major acquisitions made? What were the most notable gifts or donations in the 1990s or 2000s?

Acquisition Trust was established in 1984 and has funded the purchase of 47 works by such leading modern and contemporary artists as Robert Rauschenberg, John Chamberlain and Nick Cave. Another dozen or so works have come to the Museum from individuals associated with Acquisition Trust. Friends of American Art was established in 1993 to purchase American art [made] before 1945. Since then the group and individual members have added 18 works by such artists as Rockwell Kent, Childe Hassam and William Harnett. Council of 101 launched the Corporate Lease Program in 1975 as a means to fund the acquisition of fine art prints. Since then the collection has grown to over 275 prints that represent a who’s who of contemporary artists. Many individual collectors have given works in all areas of the collection, including gifts of extraordinary collections of African and Ancient American art.

It would be impossible for me to single one out among such a list. 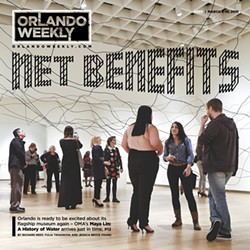 What do you see as the mission of the museum’s exhibitions now? Is it educational, entertaining or a mix of the two; purely visual or more globally experiential?

The Museum’s mission statement is: to inspire creativity, passion and intellectual curiosity by connecting people with art and new ideas. The vision statement is: to be a creative change agent for education and the center for artistic engagement, as well as a place for civic, cultural and economic development.

I have always seen the Orlando Museum of Art as the region’s flagship visual arts organization and one of the state’s major cultural institutions. The museum brings exhibitions to the area that could not be seen elsewhere and provides an experience for visitors that is on par with other significant regional museums in the country. Quality and substance are central, but the museum strives to make the visitor’s experience rewarding and enjoyable in many ways. The museum also provides many opportunities for visiting besides exhibitions and collections.

Our 1st Thursdays monthly art parties [started in the ’80s] are continuing to draw great crowds, both in numbers and diversity; our education department hosts fun and enlightening programs that are both kids-only and adults-only; many of Orlando’s top companies rent our space for meetings and galas; and, almost every week, couples are getting married in our galleries.

How has OMA sought to engage with Florida over the years – the landscape, the history, the people? (Obviously, the Florida Prize is one way.)

The Florida Prize in Contemporary Art is a new initiative. It is intended to present each artist in some depth, but also provide a fresh and exciting view of artistic activity in the state as a whole. Outside of South Florida there are not nearly enough serious venues for artists, whether commercial galleries or nonprofit organizations. The state’s best artists also need opportunities for national and international exposure. Traveling exhibitions might support that goal.

I think one of the most exciting aspects of Florida’s growth in the past 25 years is the diversity of its population. I regularly meet artists in Florida from every part of the world.