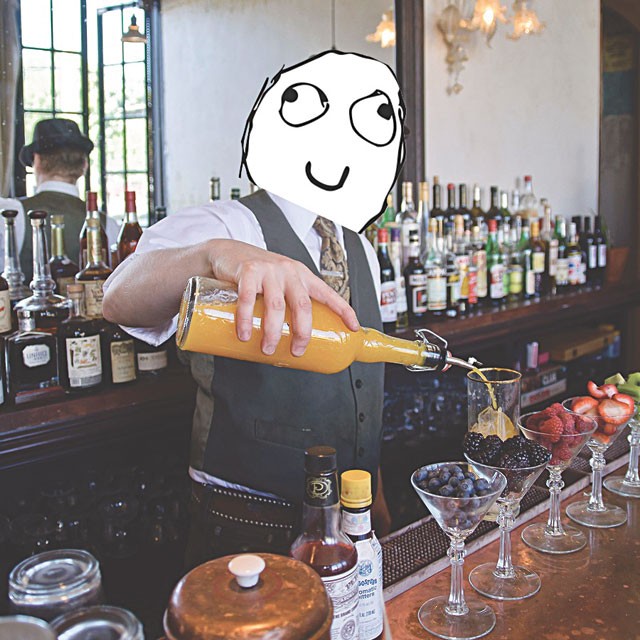 "What can I get for you?" I asked the guy who approached the bar.

"Hell no! Just throw me some more Jack," he said with a mischievous smile.

Eager for his drink, he watched me like a hawk as I poured him a perfect Jack and Coke.

"I thought service industry people hooked each other up," he exclaimed. "What's the deal?"

"Yeah right. I'm not paying that," he said, throwing his money on the bar.

"Double the alcohol is double the price," I said.

"You're supposed to hook me up. Isn't that what being in hospitality is all about?" he asked.

"You don't get it! Don't EVER come into my work," he yelled, as he walked away from the bar.

There's a sense of camaraderie among people who work in service industry. It's an appreciation for those who share a similar way of life – inconsistent paychecks, late-night hours, weekend and holiday shifts, daytime free time, and an overwhelming sense of patience when dealing with customers (Lord knows they aren't all pleasant).

If you've ever worked in the industry, you know what I'm talking about. You're probably nicer and more polite to your server than the people around you are, and you probably tip your bartender an extra buck or five on each round. It's just a silent way of saying "Thanks," or "I've been there. I know how it is."

The bond between the industry and its employees doesn't stop at the simple fundamentals of our jobs, though. We help each other out. Walk each other to our cars late at night. Borrow bottle poppers. Trade services like haircuts for drinks or lawn service for shots. Pour a heavy hand on our own dime. Visit our bartender friends on our nights off and even pass out hefty tips to those of the crew stuck behind the counter.

Just like anything, though, there are members of the team who don't quite pay it forward – like this guy. These are the poor sports of service industry; the ones who feel other servers and bartenders owe them something simply because they share the same line of work. News flash: We don't. Sure, we look out for each other and help out when we can, but not when someone expects it – or worse, demands it.

If you're looking for a handout, stick to the people you know in hospitality who'll be willing to hook up a friend. Let us strangers fend off the non-industry-related customers who want an extra-strong bang for their buck, and not you, too.