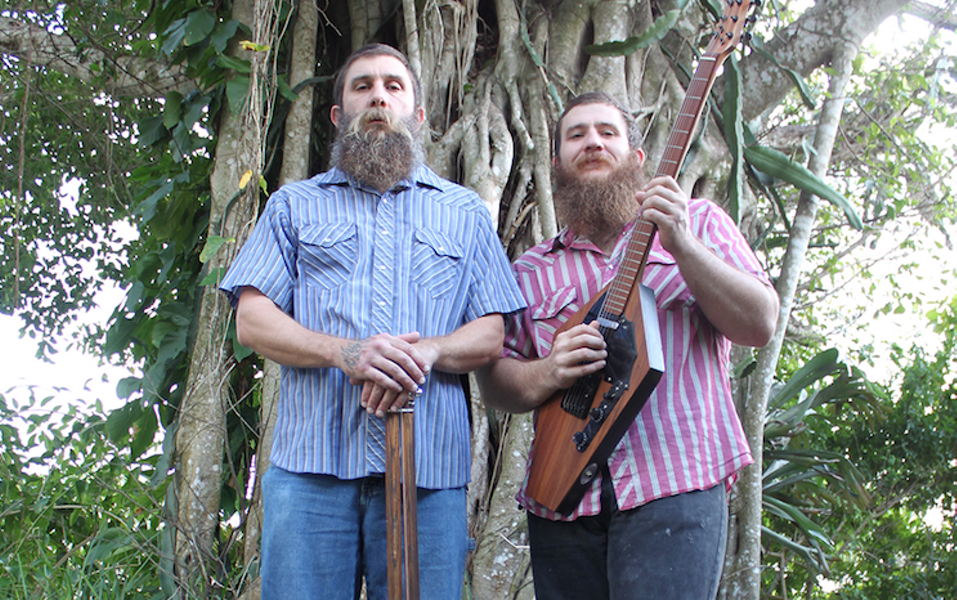 Music runs rich through the veins of acclaimed one-man band Ben Prestage. Growing up in rural Martin County near the banks of Lake Okeechobee, Prestage was immersed in the Delta blues passed down by his father, who grew up the son of a Mississippi sharecropper. Meanwhile, Prestage's maternal great-grandmother belonged to an all-female vaudeville troupe that toured America with movie star Al Jolson in the 1920s, while Grandma was adept at boogie-woogie piano.

So it makes perfect sense that Prestage would craft a career out of reinterpreting and rearranging the building blocks of American roots music for a modern audience – especially one attuned to the raw power and sheer volume of punk, hardcore and metal. "I love old blues and old-time country stuff," Prestage says. "I find that my writing style is a little more contemporary now, though. I'm not an old bluesman. I used to try to emulate the old guys, and now I'm doing my own thing based on that style of music."

It took Prestage several years to feel comfortable with that, however. While attending Indian River Community College (now called Indian River State College), he started performing around Stuart, Port St. Lucie and Jensen Beach. He quickly found himself playing upwards of nine shows a week, though, so he took a break from college and moved to Memphis in 2003 to advance his career. Prestage played in a few bands that toured the Southeast but found his true calling busking on Beale Street, performing with modern blues icons like Robert Balfour and Richard Johnston and learning how to play the "Lowebow," a cigar box variation on the diddley bow invented by John Lowe, while keeping time on percussion with his feet.

Those were the pivotal steps Prestage needed to go all in on the one-man band concept, especially once he moved back to the friendly confines of Florida. But a little luck was still required for things to work out: "I met a booking agent from Tallahassee who heard me playing in Jacksonville with my band and wanted to book us," he remembers. "But I'd already told the guys in the band that that was our last show – I wanted to focus on my solo stuff. The booking agent was not interested, though, until I convinced the owner of the Green Parrot in Key West, who'd seen me perform little 20-minute solo sets in between my full-band performances, to give me a chance. The agent had been trying to get his clients in there, so he came to see me, loved the one-man show and finally started booking me around the Southeast."

Toward the end of the 2000s, YouTube footage of Prestage's intense shows led to significant interest from festivals and promoters in Europe, which he now visits twice a year. But when he's not touring the world, Prestage still calls Florida home. He lives in Vero Beach, performing regularly at the same small Martin County clubs where he originally cut his teeth. And amazingly, even deeper bloodlines now flow through his live show. His brother Jon Prestage, who plays guitar, bass and foot drums as well, has been touring with him over the last six months, and their New Year's Eve show at Will's Pub marks the first time the siblings will perform together in Orlando, where Jon lived for several years.

"We've been kicking around the idea of playing together ever since we were kids," Ben says, "But we never did it until now. Jon's played in a bunch of bands like Basements of Florida, but he was writing blues and country songs that didn't work for them. So it's good for him to play those out – and good for me to add original material to my set list, too."

Ben laughs: "I'll do my one-man band thing for the first couple of hours, and then Jon'll come up and join me for the last couple. I've seen a lot of one-man bands, but nobody's doing what we're doing – Jon can produce the full drum kit sound, do finger-style ragtime duets with me and definitely bring more power while still giving me the freedom to do what I do. It'll be like two one-man bands in one."