"We've been trying to get this fountain moved for a few days now, but … well, you know how it is."

The fountain that Brian Chodorcoff, guitarist of The Legendary J.C.'s, is referring to is a two-story, pseudo-Italianate monstrosity that greets visitors to the Monte Carlo Resort & Casino. It's the first thing people see as they make their way from the scorching July heat of Las Vegas Boulevard into the climate-controlled, oxygen-enriched environment of the casino, and it's clearly meant to convey a sense of classical luxury … or something.

However, we're looking at the backside of the fountain, as Chodorcoff and the rest of the J.C.'s are escorting me out of the Monte Carlo onto the Strip. I've just arrived in town, but the band has been here for about two weeks, performing three sets a night, four nights a week at the casino's brew pub. They're ready to get out.

"This is like our house," says Chodorcoff. "It's where we eat, sleep and also where we work, so sometimes you get a little stir-crazy." 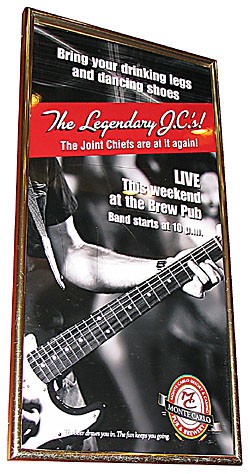 It's 1 a.m. and we have a particular destination in mind. After picking me and my friend up at the airport (in a van fully stocked with beer and Jim Beam) and driving back to the hotel, the band wants to show me the acts they're up against; the sort of band that fits well into Vegas' time-honored traditions.

They want to show me Purple Reign, a totally non-ironic, dead-on-the-money, bodysuits-and-all Prince tribute act that plays the tiny, 200-seat showroom at the decidedly old-school Boardwalk casino. Battling the incessant clanging of slot machines (a sound that is nearly impossible to escape in Las Vegas), the group glides through a note-perfect, funked-up version of "777-9311" that has J.C.'s trombone player Clay Watson dancing next to the bar and the rest of us staring in gape-mouthed wonder. The band's great – not to mention hilarious – and everyone in the showroom is having a blast, but this is not the type of band that the J.C.'s are used to comparing themselves to.

And that's the point.

"Our manager out here and the talent buyer `for the Monte Carlo and 14 other Vegas showrooms` believe in original music," says Chodorcoff. "They're really trying to get more of that happening. We're just the guinea pigs."

It turns out not everyone was in on the experiment. Booked to play throughout the month of July, the J.C.'s didn't really know what to expect from Vegas. They knew the city didn't have much of an original music scene and, being the road-dogging types, they weren't sure about being cooped up in one venue for a month. Then there's the stigma of being a "Vegas act."

But, fully aware that opportunities for original bands to make a decent paycheck anywhere (much less Vegas) are few and far between, and confident that their high-energy, Southern-fried soul would go over as well in Vegas as it does throughout the Southeast, they decided to take the plunge.

"Here we are, just a little band from Orlando, getting a chance to play in Vegas," says Chodorcoff. "What are we gonna do, say no?"

"Plus," says bassist Ralph Ameduri, "they're paying us a lot of money."

"They've been kind to us," laughs vocalist Eugene Snowden, "they've been nice to us. But there's nothing around here but cover bands and tribute acts, and that's just not what we do. But that's what the people out here are used to, so it was a little rough at first."

"They used to play booty music in here on the weekends and things got wild," says Snowden. "People were fighting, getting stabbed and shit. When the casino got bought out, the MGM people decided that was bad for their image. That's why we're here."

Thus, the J.C.'s are a break with a decades-long tradition of cover bands, lounge singers and tribute acts playing predictable music that's just good enough to make you want to leave the bar and start gambling again. For instance, over at the Bellagio, we find a band called Paragon treating a standing-room-only showroom to violin-enhanced covers of "Sweet Child O' Mine" and "Panama." Entertaining, to be sure, but not the most substantial musical meal.

On the other hand, J.C.'s sets at the brew pub are nearly intimidating in their infectiousness and intensity. With a "dance floor" separating the stage from an area of tables filled with 4-foot-high beers and food, the crowd contact Snowden thrives on throughout a set is nearly impossible to achieve. The remarkably excellent audio mix manages to help the band sound marvelous, but this is a group that works best in tight quarters and the brew pub is anything but intimate. With a rough-and-ready show of soul music that's been tightened up through the band's relentless roadwork, there's no question that the J.C.'s know what it takes to turn a crowd of drinking folk into a crowd of dancing fools, but they do it on their own terms and with their own songs. Crowd-pleasers, they definitely are; request-takers, they are not.

"The night before we play our first set," says Chodorcoff, "they're telling us, 'Act naturally, do your own thing.' So we get up there, the lights come on and we get into it and it was like …"

"'Uh,'" says Ameduri in the voice of a flustered bar manager, "'You boys know 'Mustang Sally' or 'Brick House' or something?'"

"And for the record," says Chodorcoff, "we will only play 'Mustang Sally' if someone comes up to us with $1,000 cash. At which point we ask, 'What key do you want it in?'"

"We had absolutely no idea that Vegas was like that," says Ameduri. "We didn't know they were expecting us to be a cover band until the end of our first set."

That first set was an inauspicious omen for the band. With a response of barely veiled hostility coming from the bar staff – "They were making a lot of money in there before, so I can see their perspective," says Snowden – and audiences that ranged from small to nonexistent early in the weekend, the band saw little reason to carry on.

"The contract says 'original rock & roll,' and after that first night, when they were asking us to do more covers and play Top 40 shit, we all looked at each other and decided we had the balls to get up and walk away from this," says Chodorcoff. "Because that is not what we came out here to do."

"The thing that saved us is that when the MGM bigwigs came out to make a decision about how it was going, the wife of one of the guys danced all night," says Ameduri. "After that, we knew we were doing all right."

"She also came back the next night with one of her friends and danced through two sets," says Chodorcoff. "And her husband was like the big boss, the boss of everybody. So, while all the food and beverage managers are telling us it's not working – 'They're a great band, but it's not the right room' – all the suits are saying we're the best band the room's ever had and they want to bring us back.

"To some people, we're redheaded stepchildren," he continues. "But the people who make the big decisions want us to come back every three months."

But will they? Even though the crowds have picked up in the brew pub, there's a palpable resentment that comes from the brew-pub staff (who seem determined to take it out on their customers with hostile service), and though the J.C.'s gamely soldier through their sets with smiles on their faces and fun onstage, it's clear that the chemistry of band and crowd is the one missing element that would make this a complete success. Though occasional "fans" pop up in the crowd and a few people screw up the courage to dance, the layout of the room is just not conducive to a typically riotous J.C.'s set.

So would the band want to chuck their weekend-warrior status for a sweet-paying gig in Vegas, competing against the Purple Reigns and Paragons of the Strip? Although the crowds in Vegas aren't nearly as appreciative as those that flock to see the band in far-flung locales like Charleston, S.C., and Statesboro, Ga., the money's undeniably better and the shifts – "We sleep all day, and drink and gamble all night," says Ameduri – can't be beat.

"So far it's been great," says Snowden, "but I'm getting a little cabin fever, you know? I wanna get out on the road, go to some other places. I don't know what I think about being in one place for this long."

"If Vegas had a place like Will's `Pub` or Copper Rocket, you know, places with real music, I'd be out here in a minute," says Chodorcoff. "As it is, it's really good money, and if we get the opportunity to play out here every few months and make `western U.S.` tours out of it, then that would be good. But no way do we want to become a 'Vegas band.'"