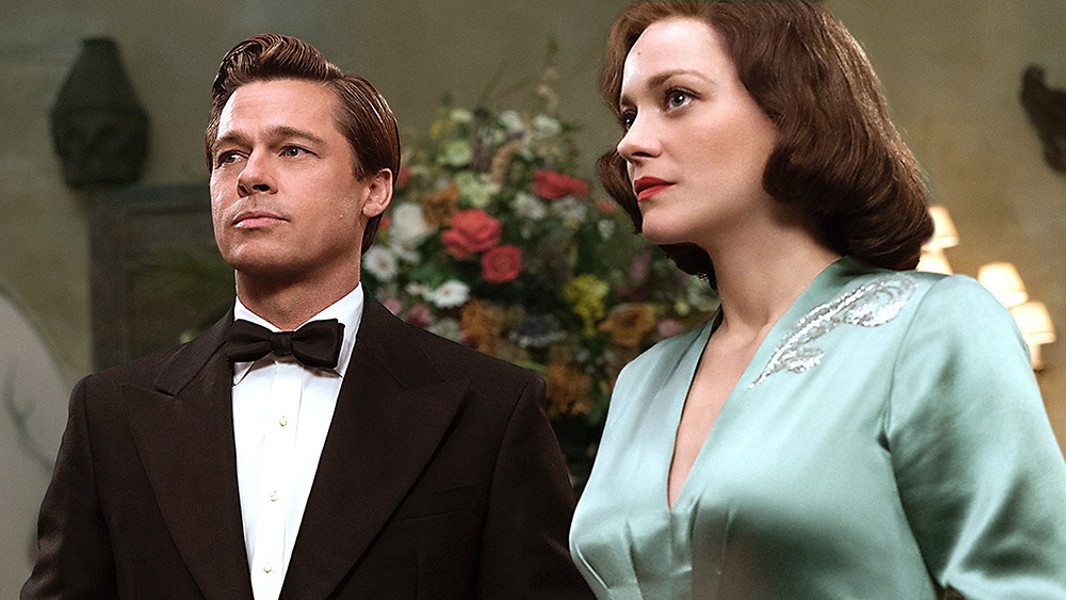 Allied Sometimes it seems like the entire universe exists only to make Debbie Reynolds look like a chump. Last year, Reynolds observed that Brad Pitt's marriage-ending affair with Angelina Jolie was more than a bit reminiscent of her own humiliation at the hands of Eddie Fisher and Liz Taylor. Almost as soon as Reynolds was finished talking, Pitt did it again, hooking up with exotic but loathsome 9/11 truther Marion Cotillard, and in so doing proving a lesson Reynolds herself should well have learned by now: Celebrity home-wrecking scandals, like pudding snacks, often come in twos. As if the shenanigans going on behind the camera weren't enough to give everyone a serious sense of déjà vu, check out the plot of Allied, the picture on which Pitt and Cotillard met: A Canadian intelligence officer falls in love with a French resistance fighter in World War II, only to discover that she may be a double agent he's expected to kill. In other words, the movie is Brarion's Mr. and Mrs. Smith not just in context, but in content as well. This whole thing is like an Entertainment Tonight version of Ouroboros, with Pitt swallowing his own tail while proving unable to keep his hands off anyone else's. (R)

Bad Santa 2 Please don't suck. Please don't suck. You're going to suck, aren't you? Please don't suck. The original Bad Santa was one of those moviegoing experiences that seem both unique and complete – a cyanide-capsule antidote to the saccharine cynicism of Christmas movies, with a just-redemptive-enough dénouement inserted by the studio over the objections of director Terry Zwigoff. (Every once in a while, boardroom interference can be a good thing.) Zwigoff is unsurprisingly absent from this long-gestating sequel, but so are his writers and actress Lauren Graham. Worried yet? Added to the mixture are Christina Hendricks, as an alcoholic nymphomaniac who runs a charity operation, and Kathy Bates, as the title character's simply abominable biological mother. For what it's worth, The Wrap called the new movie evidence that the war on Christmas might actually be a thing. And they didn't mean it in the good way. (R)

Miss Sloane Jessica Chastain plays a take-no-prisoners Washington lobbyist who's moved to switch sides after she's approached by a client who offends even her free-floating morals. So is it Thank You for Smoking for dullards, or Scandal for white people? (Come to think of it, that last thought is fairly redundant.) Director John Madden's résumé includes Shakespeare in Love and both Best Exotic Marigold Hotels, which means the target audience here might be somewhat broader: everyone's mother who's over the age of 40. (And isn't Kathy Bates.) (R; opens Friday, Nov. 25)

Moana God knows there are enough story hooks here. Moana is the first foray into CG animation by veteran Disney directors John Musker and Ron Clements. And the plotline has a nicely exotic tilt, with a young Polynesian woman fighting to save her family with the help of a South Pacific deity (Dwayne Johnson, known to French audiences as Le Roque). But let's face it: The only angle any of your friends are going to be talking about is the songwriting contribution by the suddenly omnipresent Lin-Manuel Miranda. For God's sake, the guy writes two musicals and all of a sudden my social media feed is clogged up every morning with his latest daily affirmation, like he's Jack Handey or something! Maybe I'll just unfollow everybody until Christmas. Or at least until NBC airs that live Hairspray, and all of the drama majors in America have something else to obsess over. (PG)

Rules Don't Apply Warren Beatty spent four decades researching and planning a biopic of the infamous Howard Hughes. Which just goes to show that, if you spend too long preparing for a job, some entitled asshole is going to waltz on in and take it away from you. ("Donald Trump?" the reader ventures gently. I was going to say Martin Scorsese, but partial credit.) The Aviator be damned, Beatty made his film anyway – although he changed its narrative a bit to focus on a naive young starlet and her driver whose relationship threatens to violate Hughes' policy against canoodling among the help. Initial reviews indicate that Beatty's performance as Hughes – his first time on camera since 2001's Town & Country – still eats up a good deal of screen time. But what do you expect the guy to do after all that prep? Ever since Annette Bening made an honest man out of him, he's had nothing to do with all those pointers he picked up working for the Children's Defense Fund. (PG-13)