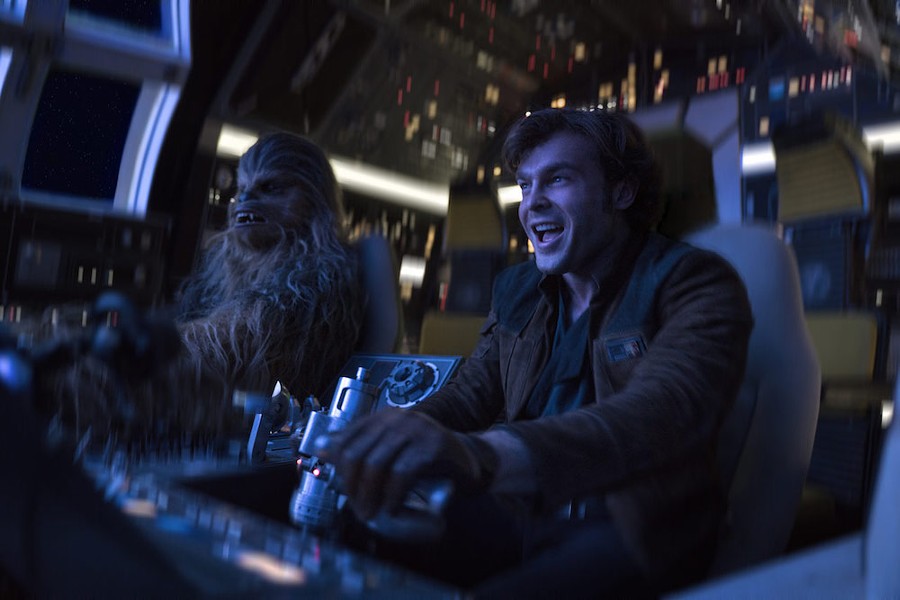 Beast As Bart Simpson once told us, every woman has a soft spot for a good-lookin' rebel who plays by his own rules. But what if the outlaw paramour you've landed yourself might also be the serial killer who's terrorizing your quiet English community? Hey, sacrifices are what make a relationship work, right? This romantic psychodrama turns on just such a premise, and even adds an extra detail to reinforce its point about personal obsession compensating for a multitude of sins: The bad-boy boyfriend in question literally reeks. Yes, as in permanent body odor. So if you're keeping score, that's a bunch of dead bodies and an ever-present cloud of funk in the "negatives" category. But really, he's just such a good listener. (R)

Solo: A Star Wars Story "Competent," says Entertainment Weekly – and that might be music to the mouse ears of everyone at Disney, which has been staving off one PR disaster after another since this spin-off/prequel/whatever was first announced. The casting of Alden Ehrenreich as a young Han Solo was met with some concern; then directors Phil Lord and Christopher Miller were bounced from the project, replaced during shooting by ol' Opie Cunningham himself, Ron Howard. The whole undertaking appeared so skin-of-the-teeth that a clickbait article recently appeared with the headline "The moment Ron Howard knew he'd be able to finish Solo." Um, you'd like to think it was the moment he signed the contracts, no?

Now the finished (hopefully) project is headed to theaters worldwide, poised to teach us how Han became best buddies with Chewbacca, how he first met Lando Calrissian, and all the other stuff you used to enjoy being able to just imagine. In this era of the 12-hour news cycle, it's perhaps not surprising that the major point of interest in the film has become the appearance of Donald Glover, who is currently enjoying his honeymoon period as a cultural darling before everybody figures out he's just as pretentious and delusional as Kanye, but in the opposite direction. This is Alderaan! (PG-13)

Anything Once an avatar of righteous out-ness, Matt Bomer is suddenly taking a whole bunch of flak for having accepted the role of a trans woman who helps a Southern widower learn to live again. Only trans people should play trans people, the argument goes, and I get it – at least in theory. Parts for minorities are few and far between, so trans characters should be played by trans actors, Asian characters should be played by Asian actors, and characters who have trouble conveying human emotion should always be portrayed by Keanu Reeves. Perhaps the most curious complaint came from Indiewire, which suggested that Bomer couldn't be convincing as trans because his jawline is too strong (!). Listen, guys: I'm friends with a trans woman who looks like a gene splice of everybody who ever appeared in a David Lee Roth video, particularly Dave. And if you want to tell her she's not a woman because her features are too chiseled ... well, I'll hold your coat. (R)