Now playing on screens around town 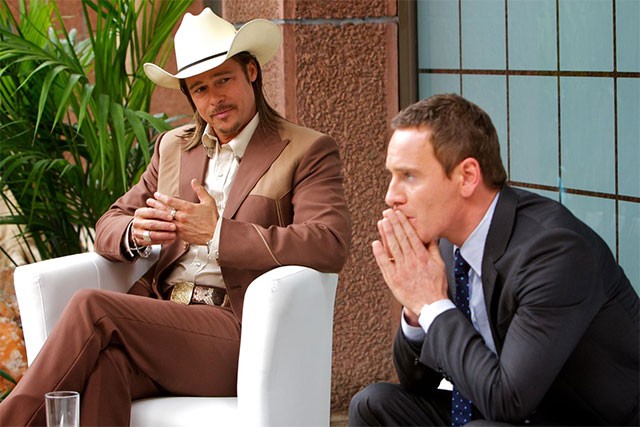 The Counselor Finally, here’s something for all those grieving Breaking Bad fans to do that’s more productive than Tweeting 24/7 that their lives will never again have meaning. Thanks to director Ridley Scott, they can now watch another former straight arrow get seduced into the world of drug crime. One diff: In this case, the bad-breaker in question (Michael Fassbender) started out as a lawyer, which makes for a much shorter personal descent but it does get you out in time to have your parking validated. The first original screenplay by Cormac McCarthy (whose novels yielded No Country for Old Men and The Road) provides supporting parts for Penelope Cruz, Javier Bardem, John Leguizamo, Rosie Perez and Ruben Blades – meaning that, in one fell swoop, McCarthy and Scott have done more for the cause of Latinos on film than three animated movies about trash-talking
lizards. (R) – Steve Schneider

Jackass Presents: Bad Grandpa For a movie that’s a spinoff of the well-established Jackass franchise, this one is getting pilloried as an alleged “ripoff” of plenty of other cultural products: Five minutes of clicking brings up indignant references to Borat, Bad Santa and even Cartoon Network’s Uncle Grandpa (give that guy a cigar, and up his meds while you’re at it). Just to keep my hand in it, I’ll throw out the suggestion that Johnny Knoxville and company probably got their green light the minute Off Their Rockers was renewed for a second season. And now that Betty White is off the air again, the Jackass crew is really in the catbird seat, since there’s nowhere else to go to see an octogenarian embarrass the living hell out of unsuspecting whippersnappers from coast to coast. Well, other than C-SPAN, that is. (R) – SS

Short Term 12 Writer/director Destin Daniel Cretton won both the jury and audience awards for Best Narrative Feature at this year’s SXSW for Short Term 12, an expansion of his 2008 short about a young woman and her boyfriend who are tested by their work with at-risk teens. Star Brie Larson’s name is being bandied about for an Oscar, and as of this writing, the film itself stands at a staggering 99 percent on Rotten Tomatoes. A one-week run in Orlando means you’ll need to get your own at-risk ass in gear if you want to stay up to speed on all the year-end award bait. (R) – SS