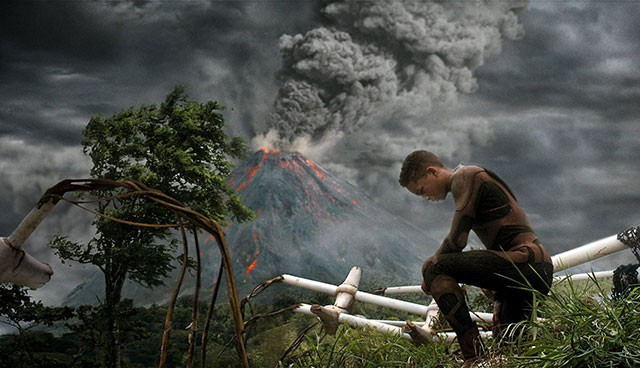 After Earth Just how long ago did Will Smith agree to bestow his touch of summer gold on M. Night Shyamalan, of all people? In the only scenario I can envision, Smith ushered in the 21st century by making a vow that his then-infant son would one day get to act in a project helmed by the genius creator of The Sixth Sense. Contracts were signed, sealed and delivered, and now Smiths père et fils get to share the ignominy of playing futuristic space pilots for a guy even the Razzies have tired of
pantsing. In real life, it was recently rumored that 14-year-old Jaden Smith was seeking emancipation from dear old Dad; guess he thinks William Morris would have provided wiser career guidance. (PG-13) – Steve Schneider

Now You See Me Filmmaker Louis Leterrier seems to be on a mission to work with anybody who has ever played the Hulk. He directed both Edward Norton and Lou Ferrigno in 2008’s reboot of the Jostlin’ Green Giant, and now Mark Ruffalo is part of the cast of Leterrier’s Now You See Me, in which a group of master illusionists use their skills to rip off shady business types. That bit of trivia is probably more interesting than anything in the movie, which looks to be just about what you’d expect from a co-writer who had a hand in the Dirty Dancing and From Dusk ’Til Dawn sequels, and which makes room for the cheerily slumming Michael Caine and Morgan Freeman (desperate to prove that they will take anything a post-Nolan summer is willing to throw at them). At least the movie gets Leterrier closer to that top rung of Marvel-nerd trivia. Eric Bana, call your office! Bill Bixby, rap three times on the table if you can hear us!
(PG-13) – SS

At Any Price Once again, director Ramin Bahrani showcases a seldom-depicted culture: the surprisingly cutthroat world of corn farming in Iowa. Yet despite that unique subject and a mesmerizingly odd performance by Dennis Quaid, At Any Price does little more than present family drama in an unfamiliar setting. Farmer and salesman Henry Whipple (Quaid) sinks deeper into a personal and financial quagmire, asking, “Isn’t there something more?” Not as far as this film goes. If not for the unexpectedly strong job of Clancy Brown as a rival salesman and Bahrani’s honest re-creation of rural life, this cinematic tapestry would be pulled apart by the unspectacular screenplay, erratic editing and poor pacing. (R) – Cameron Meier