Opening in Orlando this weekend 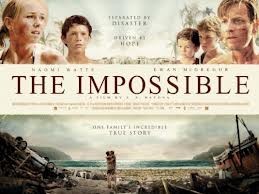 The Impossible – With the uproar over Hurricane Sandy relief whooshing loudly through our ears, we get to be transported back to the comparatively placid days of the 2004 tsunami. Director J.A. Bayona’s film follows a British family of five (headlined by Ewan McGregor and Naomi Watts) who have to manage the terror of natural disaster when it hits in the middle of their Thailand vacation. The script is even based on a true story – although in the real world, the family in question was actually Spanish. But hey, how are you going to get a wide audience to care about them, amirite? #justkillusallnow (PG-13) – Steve Schneider

Not Fade Away – David Chase, kingpin of The Sopranos (see what I did there?), returns to New Jersey but travels back some 48 years for this allegedly autobiographical portrait of a kid who’s driven to start a band after he sees The Rolling Stones on TV. A mash-up of That Thing You Do and I Wanna Hold Your Hand, but with James Gandolfini himself as our hero’s disapproving dad? Yeah, that’s fun for the whole family. (See what I just did again?) (R) – SS

Texas Chainsaw 3D – The chainsaw is right in your face in a movie Brian DePalma wishes he were still technically alive to make. The setup: Decades after the infamous massacre, a fearful populace learns that the Texas family that has long haunted their nightmares isn’t close to done with its killing spree. Speaking of which, has anybody heard from Jeb Bush lately? (R) – SS

Django Unchained (two stars) – Subtlety is gone with the wind in Quentin Tarantino’s homage to spaghetti Westerns, which follows an Old South slave (Jamie Foxx) on a mission to find and free his wife. The n- and f-bombs fly and the violence is over the top, going beyond stylistic admiration and into the realm of fetish. In typical Tarantino fashion, the entire cast is mesmerizing and moves the stylistic, gripping narrative along quite well -- until, in the final act, it unravels faster than Scarlett O'Hara's petticoat on her wedding night. (R) – Cameron Meier

Hyde Park on Hudson (three stars) – A success largely because of Bill Murray's charismatic and endearing (if slightly unbelievable) performance as President Franklin D. Roosevelt, Hyde Park on Hudson depicts the historic 1939 visit of King George VI and Queen Elizabeth to FDR’s rural New York home. But the real emphasis is on the relationship between the President and his sixth cousin, Margaret "Daisy" Suckley (Laura Linney), Daisy, who is portrayed as more than a friend,  illuminates the personal side of the president, although the film manages to speculate on his affairs in a way that seems both consistent with history and reverential to the man himself. (R) – CM