by Jeff Meyers and Steve Schneider 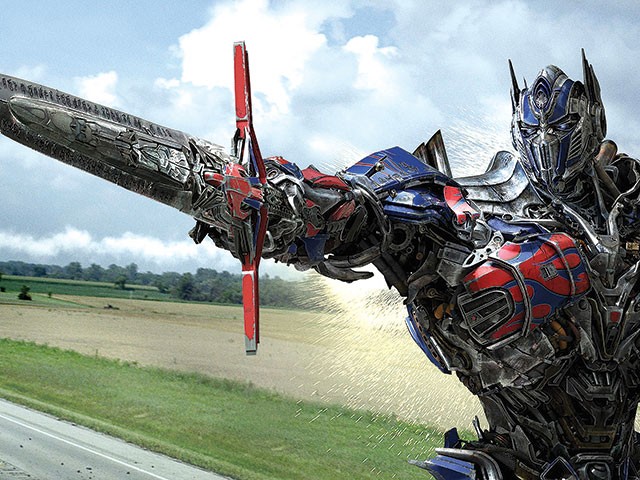 Transformers: Age of Extinction Is there life after Shia LeBeouf? More to the point, is there life for Shia LeBeouf? Now that the tweeter ya love to hate has decided his Joaquin Phoenix act wasn’t working for him any better than it worked for, well, Joaquin Phoenix, there’s a huge opportunity for another allegedly corporeal actor to line up alongside the uppity Datsuns that are the real stars of the Transformers franchise. In fact, the fourth Trannies picture has an entirely new cast of human types, led by the eternally game and unencumbered-by-self-awareness Mark Wahlberg. Marky’s performance in Age of Extinction has already been quite the meme thanks to the flick’s trailer alone, which made the line “I tink we just found a Transfomah!” an instant target for the Chris Hardwicks of our society. (Note to Hollywood: He who loses Hardwick has lost the nation.) Director Michael Bay is back, though, after some initial chatter that he might join LaBeouf on the “disgraced alumni” list. So what does the Orson Welles of tinting and detailing promise for outing number four? “This is a much more cinematic one,” Bay told Yahoo UK (thus distinguishing the film from previous installments, which were apparently all live radio plays). He also promised that the movie would be “less goofy” than its immediate predecessor. So, for reference: The plot of Age of Extinction depicts a new era in the life of the Autobots, as the cars-that-turn-into-robots are joined for the first time on screen by the Dinobots, robots that take the form of dinosaurs. Yep, nothin’ but hard-nosed realism as far as the eye can see. (PG-13) – Steve Schneider

Cold in July Indie horror director Jim Mickle turns to suspense with this sweaty, seedy slice of East Texas neo-noir, in which a family man and frame shop owner (Michael C. Hall) shoots a home invader and then has to deal with the victim’s ex-con father (Sam Shepard). What seems to be a simple tale of vengeance spins into a complicated web of police corruption, Southern mafia atrocities and vigilantism. The story doesn’t dot every i or cross every t, but it certainly makes every ridiculously sinister turn stick. (R) – Jeff Meyers