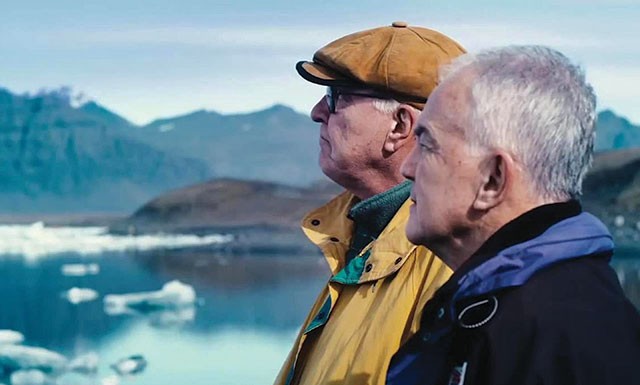 As Above, So Below Proving that the phrase “M. Night Shyamalan protégé” can be more than an onscreen title in a Key & Peele sketch, director John Erick Dowdle (2010’s Devil) trains his camera on the catacombs beneath Paris, where the buried remains of millions of people give rise to unspeakable evil. Not to be confused with 2007’s Catacombs, which trained its camera on the catacombs beneath Paris to show that the buried remains of millions of people had given rise to unspeakable evil. That one was made by some nobody, not the chosen inheritor to the mantle of Lady in the Water. Seriously, it’s like Hollywood had a Sorting Hat for hacks or something. (R) – Steve Schneider

Land Ho! In a fresh twist on the buddy/road genre, two older gents who used to be brothers-in-law take a trip to Iceland to rediscover some of the joy of living. One of them (Earl Lynn Nelson) is a Yank with a taste for weed and poon; the other (Paul Ennhorn) is a transplanted Aussie who used to be Martin Bonner. Together, they discover just what Björk was so worked up about. In its debut this year at Sundance, this movie was called “beguiling,” “elegiac,” and every other adjective that means “gonna get crushed at the box office by the shocker about all the dead Frogs.” (R) – SS

The November Man Still looking for a vehicle to top Mamma Mia, Pierce Brosnan accepts the role of a retired CIA star who takes on one last mission: to protect a female witness (Olga Kurylenko) who’s in serious danger. Hmmmm, that reminds me of something. Hold on, I’ll get it. On the tip of my tongue here … oh, yeah: everything. This movie is a remake of everything. And if that’s the case, then the odds are pretty darn great that Pierce is gonna sing again, right? I sure hope so. He’s the only guy on Earth who sounds like an isolated vocal track even when he has accompaniment. (R) – SS

The Trip to Italy The pairing of stars Steve Coogan and Rob Brydon is a well that director Michael Winterbottom just can’t stop going back to. Building on the comic chemistry showcased in Tristram Shandy: A Cock and Bull Story, he’s taken his bantering duo on a tour of English restaurants in the movie and TV series The Trip. Now he sets them loose on the four-star joints of Italia, allowing plenty of time between courses so they can talk about … Batman, for some reason. Hey, whatever works. Maybe Tony Wilson from Winterbottom’s 24 Hour Party People will show up and offer them molly as palate cleanser! (R) – SS