Playing in local theaters this week 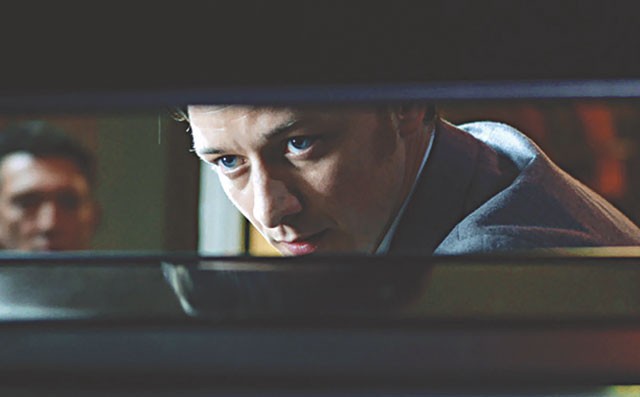 42 Between Bush 41 and Bush 43, America experienced eight years of glorious peace and prosperity. Return with us now to those halcyon days, which began when a scrappy governor from a Southern state defied all the odds to become our 42nd … wait, what? It’s not? Oh, well. Sports fans will doubtlessly enjoy this biopic of Jackie Robinson (newcomer Chadwick Boseman), the player who broke the color line in major league baseball. Hey … just like President Obama, amirite? AMIRITE? Wait a minute: It says here the real star of 42 is Harrison Ford, who plays the kindly white guy who gave Robinson his shot. Sigh. Have fun, America. I’ve tried hard enough with this. (PG-13) – Steve Schneider

Scary Movie 5 I’m probably the only guy in the world who thought the Scary Movie franchise got better when it was handed off to Airplane’s David Zucker. But after his An American Carol took aim at liberal orthodoxies and flopped, the Zuck isn’t going to be getting much more work in Tinseltown. The job of wringing another installment out of the Wayans brothers’ Scream-spoofing tactics fell to Spike Lee’s cousin Malcolm D. (of Soul Men and Undercover Brother quasi-fame). At least Charlie Sheen is still present and accounted for – alongside fellow clean liver Lindsay Lohan, co-starring in her second national release in only three weeks. Somebody needs to get Streep hooked on meth, just so she can keep up. (PG-13) – SS

Trance When a movie like Trance gets described as “twisty,” you know what it means: You’re going to have to swear off all electronic communication devices until you can see the thing on opening day, whereupon you’ll discover that any of the “spoiler” points you were so desperate to avoid are telegraphed within the first 15 minutes of the film. But when the director in question is Danny Boyle, it’s understandable that you’d want to raise your expectations a bit higher. Boyle’s latest casts James McAvoy as an auctioneer whose shattered memory is all that stands behind his criminal partners and a purloined painting; Rosario Dawson is the hypnotist who’s tasked with trying to unlock his mind. Well-aimed torture seems to be Boyle’s thing these days: Remember, in his last movie, 127 Days, he got to hobble James Franco before the rest of the world realized how much they’d enjoy the privilege. (R) – SS