Commissioner Fred Brummer's power grab is back, only now in separate pieces 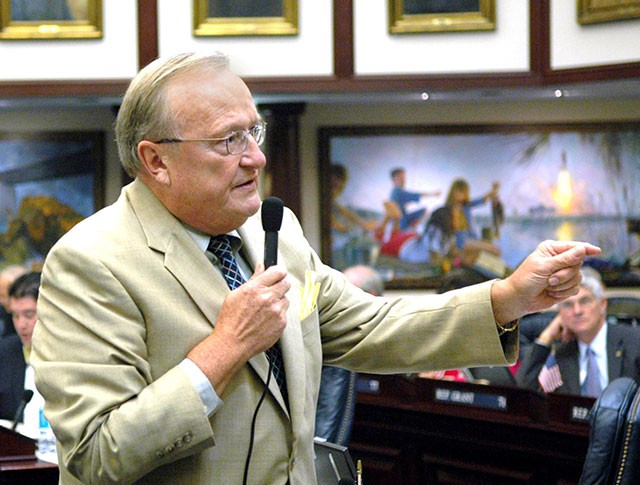 Number of petitions required to be obtained daily for a citizens’ initiative to make the Orange County ballot under the latest proposal by Commissioner Fred Brummer. The people behind the earned sick time initiative had to collect 245 petitions daily to get their initiative on the ballot, an action notoriously shut down – at least temporarily – by the commission during Textgate.

Number of petitions a candidate for Orange County Mayor is required to collect daily over a 3.5-year period to get on the ballot, resulting in approximately 6,000 petitions to run for mayor. County commission candidates need 1,100. Brummer is asking to reduce the petition period for citizens’ initiatives from 180 to 90 days, while increasing petition requirements.

Amount the county is charging Organize Now for public records regarding Commissioner Fred Brummer’s communications on his proposed charter amendments – amendments he has admitted were co-written by outside lobbying groups.

While we were busy clutching our pearls and watching last week’s Medicaid expansion story go national [“Falling into the gap,” April 9], that old idiom about all politics being local or whatever took on a new, carnival fun-house mirror hue as the Orange County Board of County Commissioners – via fading clown Commissioner Fred Brummer – went ahead and resurrected its attempt at a charter amendment to ruin democracy, only this time in smaller, more digestible chunks.

You’ll likely recall that Brummer was effectively laughed out of the chambers a few weeks ago for bringing up an omnibus ordinance that would make virtually all elected local offices nonpartisan, eliminate the tax collectors office, all but erase the ability of citizens to use petitions to get issues on the ballot (because sick time got him in trouble via Textgate), set up some term limits, add two “Hispanic” districts (because that’s legal) and get rid of chocolate milk in the cafeteria. He was on a rampage! Anyway, the student council – er, county commission – wasn’t having any of it, because basically Brummer was pulling a giant and obvious Republican power grab and trying to force a special election in May which didn’t make any sense at all.

But, like most poisonous meals, this one has come back up in chunks. Although, from what we’re hearing, only one of those chunks has the actual velocity to achieve anything, and that’s the one that would make it harder for you, dear citizen, to petition your government. We thought Brummer’s bummers were dead in the water, but at the April 8 gathering of county commissioners, which was being, somewhat blatantly, controlled by tourism lobbyists, some of his proposed changes were reanimated. Mostly because tourism interests want to keep employing housekeepers without having to give them time off for being sick or for taking care of their kids. According to the Orlando Sentinel, the Orlando Regional Chamber of Commerce (“very happy” about all of this, reportedly), the West Orlando Chamber of Commerce and the Central Florida Hotel and Lodging Association were minding the strings this time, fighting against what they continue to call “outsiders” trying to mess with their exploitative bottom lines.

What all of this means is that there will likely be a public hearing on May 6 that will put at least one (if not more) of Brummer’s bummers on the Aug. 26 ballot (the elimination of Tax Collector Scott Randolph’s position has been, for the moment, removed from the conversation) for voters to decide on for themselves.

Orange County Supervisor of Elections Bill Cowles, who believes that if the petition process is going to be altered it should be done so holistically and not just in small pieces, points out that there could be a grand irony come August if things go a certain way: There’s currently a Democratic-led petition drive to make county commission seats partisan, and now there could also be a question on the same ballot that asks voters to make all county offices nonpartisan. We are, in effect, un-inventing the wheel in our banana republic.

But, as we’ve mentioned, the real issue at hand is the public’s ability to get issues on the ballot via citizens initiatives. If Brummer (and Big Tourism) has his way, it would become almost impossible. Brummer’s amendment would cut the amount of time to collect petitions to get a matter on the ballot in half, while the number of petitions required for an issue to be considered would be increased.

“Do you understand how hard it is to collect 784 petitions a day?” Organize Now director Stephanie Porta says, recalling summer of 2012 when she led the sick-time battle. “We had to collect 240 a day. It’s already an impossible feat.”

It’s almost like collecting $792.20, in a weird way. That’s what Organize Now is currently attempting to do with its “Sunshine Isn’t Always Free” fundraising drive to pay off invoices sent to the group last week after it requested public information on whom Brummer was talking to and when.

You think you can see the sun in Orange County. You can’t. That’s just a blind spot.