Bombshell: It's a word that brings to mind the glittering, larger-than-life stars of classic Hollywood, before conjuring images of trench warfare, chemical warfare, drone strikes. Both sides of this American coin form the basis of the "couture gas masks" of local designer and artist Ben Van Beusekom's Bombshell: Masquerading Warfare exhibit at downtown's CityArts, running from Sept. 17 to Oct. 11, and part of this year's Global Peace Film Festival.

Van Beusekom has been painstakingly working on this haunting and breathtaking collection of masks for over a decade, and Bombshell is their first public showing. The timing couldn't be more apropos, given that most of us now spend a good portion of our day wearing a mask in the age of coronavirus.

Make no mistake, though, concept and craft hold equal footing in Bombshell. Van Beusekom uses his training in haute couture tailoring and application of the Green Arts movement's repurposing strategies to create truly stunning and unique objects. History and aesthetics collide in Bombshell, and the results are nothing less than spectacular. 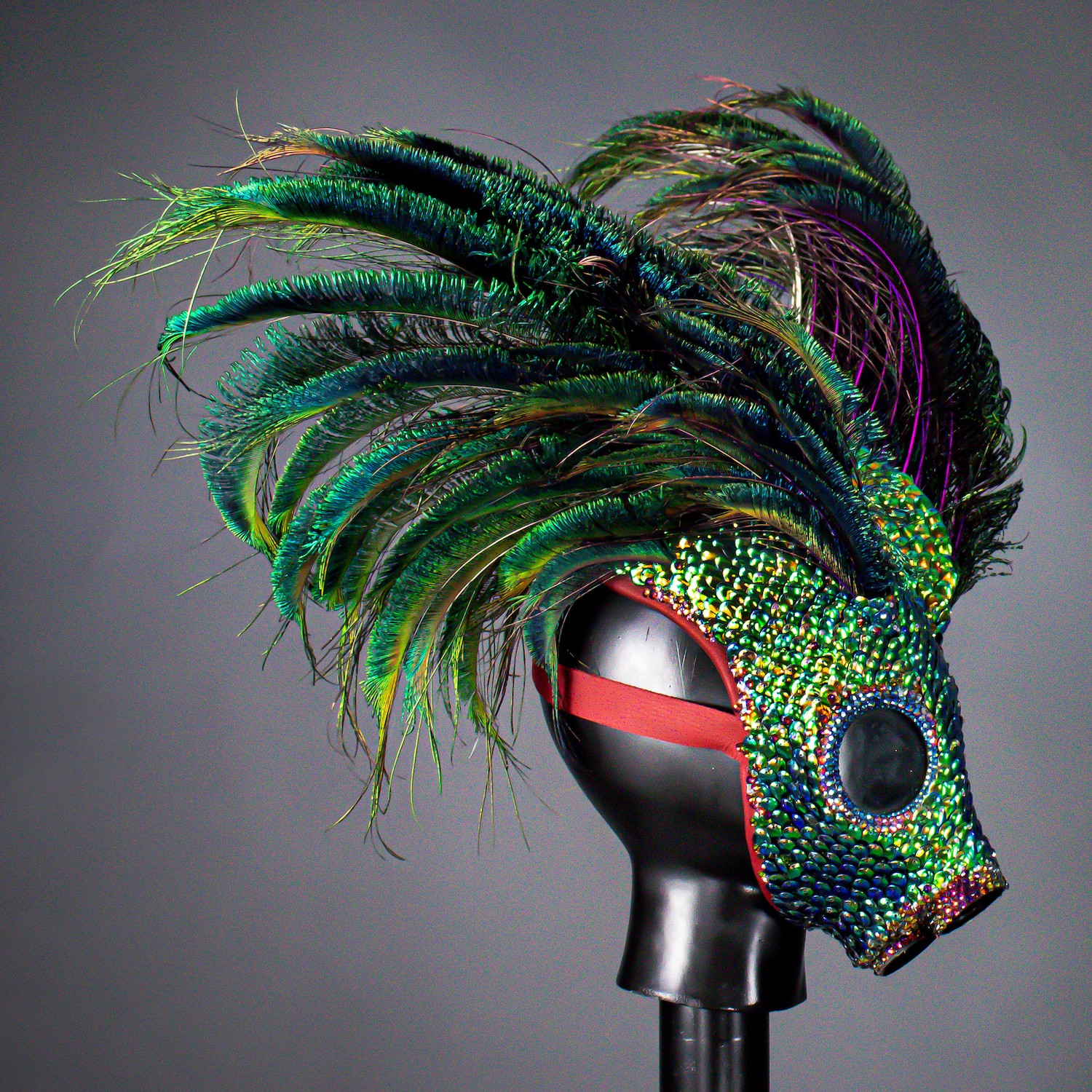 What were the ideas that inspired this project?

I started working on these masks about 10 years ago. Originally, the idea was focused on identity ... If we all had to wear an assisted breathing device for whatever reason – back then I was thinking epidemic, global warming and pollution, bioterror – how would we identify ourselves? 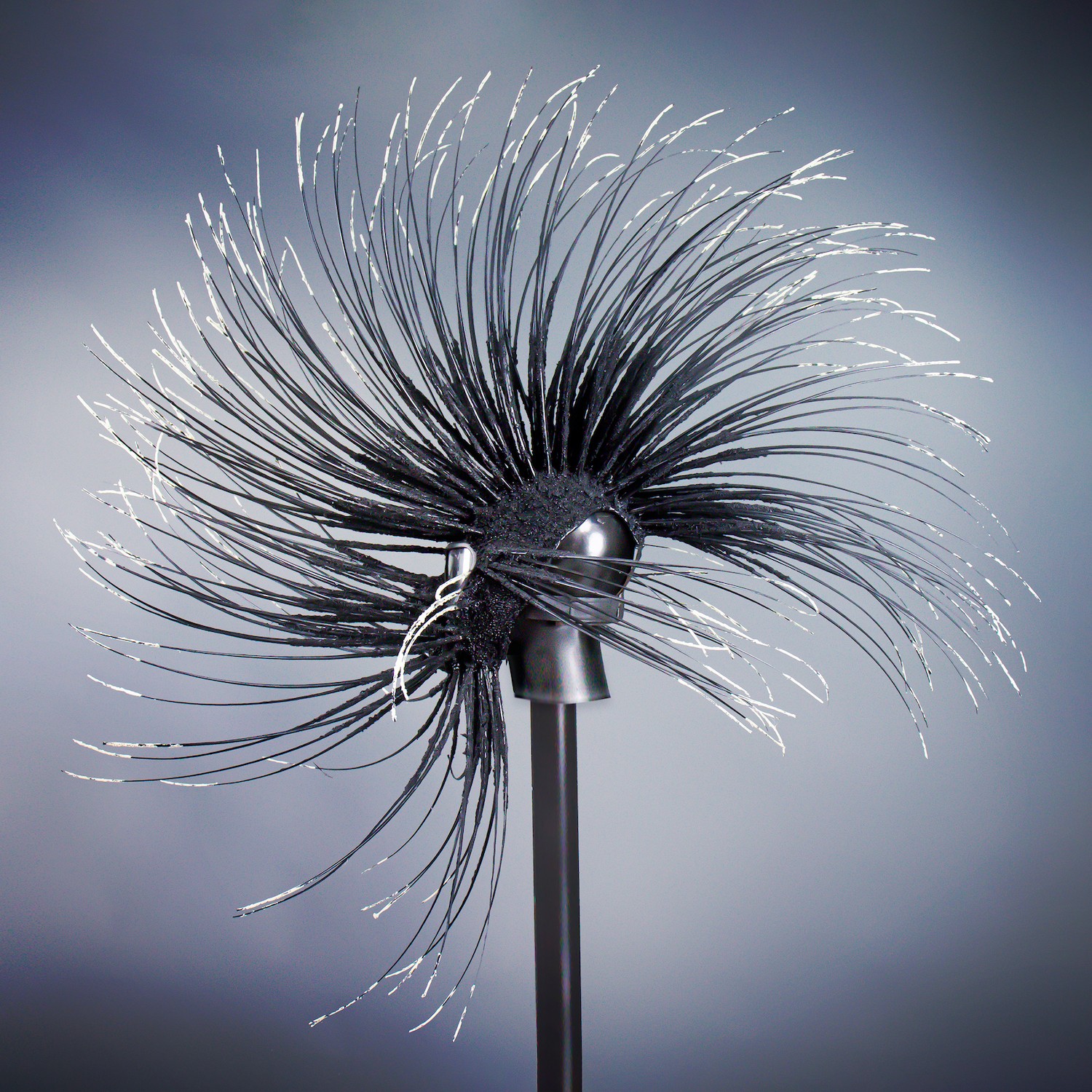 Does working with masks right now make you feel trapped in a historical loop on some level?

It really does and it is interesting. You go back to the Spanish flu and you go through the history of World War I and World War II and all these situations where we have experienced epidemics and we've had wars where we've had to wear these masks and we as a society relied on a mask in some form or another – I wanted to find a way [continued on page 15] to break the stigma of all that. I wanted to say, is a mask hiding something or is it revealing something? And what I mean by that is, when you look at something like, say, Halloween, we can choose to be something that is exciting, we choose to be whatever we want to be for that night and express that desire.

It's a way of looking at how society is playing off of this pandemic right now in the masks that they're choosing to wear. It's a whole new level of changing who you are and changing how you want to be viewed.

"Bombshell" is a very loaded word ...

Choosing the name was very personal to me because I wanted something to make people think. With Bombshell you immediately think of old Hollywood, Marilyn Monroe, Clark Gable, Rock Hudson, Joan Crawford – you think of that classic beauty. But Bombshell is also trench warfare and it's a very terrifying thing.

What can you tell us about the work that went into constructing these masks?

When I started this, a friend of mine had donated his gas masks from his time in the Armed Forces ... and then that snowballed into other people donating gas masks. A lot of them are older, a lot of them do come from World War II, and they are from all over the world. But most of them are donated, like 90 to 95 percent of my collection. In total, with what I have currently in progress and currently completed, I have about 38 pieces.

The materials are, for the most part, repurposed. So if a costume shop had spare crystals and fabric and feathers, they would donate them to me. And that's how I got started with it. At least 50 percent or more of the materials on each mask, including the mask itself, are donated or repurposed.

The phrase "couture gas masks" popped out at me.

The idea behind the couture side of "couture gas masks" was just the idea that everything is hand-crafted, hand-patterned, I select the beads and all the fabric ... all the sequins are all hand-stitched one at a time onto organza, and then those pattern pieces are stitched onto the mask. And so there really is a haute couture element to it, as couture as it can be for not being true fashion. I can spend anywhere from 80 to a couple hundred hours on a single mask.

But the intent was always that these would be displayed as a fine art piece. And when you go into the couturing elements, the beads are Czech glass beads or Austrian beads, they're silver, they're 24-karat gold. If I'm using gold leaf, it's all 24-karat gold leaf, it's all hand-applied, all the crystals are generally Swarovski. And it's the combination of adding the green elements with the high-end elements and blending them seamlessly. It's that feel of trying to make it feel high-end but have it be a mix of the old and the new, so it has some sort of a history to it. I think that's important in telling the story.