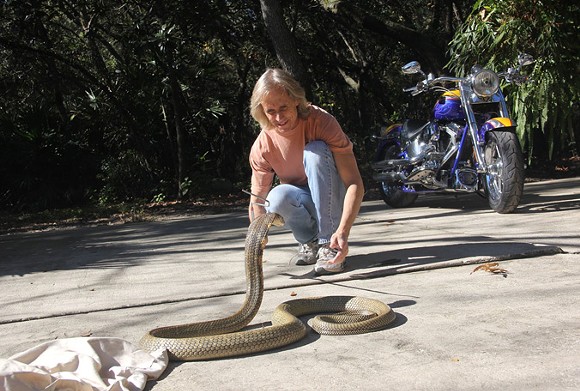 The missing Orlando cobra has been found – not in the woods and not in one of the multiple traps set by the Florida Fish and Wildlife Conservation Commission, but in somebody's garage. Underneath a dryer. Hissing.

According to some raw video posted to WFTV.com, a woman was putting some things away behind her dryer when she heard hissing noises and noticed the snake. She called Orange County Animal Services, who confirmed that the snake was indeed the king Cobra that escaped from owner Mike Kennedy's home more than a month ago. Animal Services officers – who told WFTV the snake wasn't exactly docile for them – and police managed to catch Elvis, scanned him for a microchip and returned him to Kennedy's home.

Apparently escaped cobras like garages – the last time one of Kennedy's cobras escaped, it turned up on a College Park garage and was shot by the startled homeowner who discovered it there.

Dragon Ranch, the exotic animal rescue operated by cobra owners Mike and Valerie Kennedy, posted a statement to its Facebook page thanking everyone who helped look for Elvis the cobra. Apparently the ordeal has left Elvis "pretty beat up and weak."

Dragon Ranch would like to thank Law enforcement, FWC, animal control, our neighbors and the community for the understanding, support and love that has been extended to us in this difficult time. Your vigilance has been vital to the safety of the public and the recovering of the animal. We are so grateful for this happy end without harm to anyone. This is a huge relief for Mike and our family. The Cobra is pretty beat up and weak and Mike will do all he can to nurse this sick animal back to health. We are taking steps to go above and beyond the guidelines set by FWC to insure nothing like this ever happens again. It is important not to loose sight of the important work that animal shelters and Sanctuaries do for animals across the country. Free range animals are in trouble, pressured by habitat encroachment and exploitation, resulting in declining populations. Animals need our protection, even the ones we fear. Dragon Ranch will continue to save animals here and abroad.


UPDATE: Orange County Animal Services has shared a blow-by-blow account of what went down during the capture of Elvis the cobra:

In the late hours of Wednesday, October 7, the Ocoee Police Department made a call to Orange County Animal Services requesting assistance for a snake confined in a garage. The responding Animal Services Officers arrived 22 minutes later and had no idea the call would lead them to Elvis, the missing 10 foot king cobra.

An Ocoee resident had initially made the call to the Police Department after hearing hissing under her dryer. The responding officers, Jenifer Porter and Kirsten Smith, heard the loud hissing as well immediately after arriving. Backup was called to assist in the capturing of the king cobra, known to be the largest venomous snake. Animal Services officers Billy Ledford and Kimberly Duncan arrived to provide assistance to their colleagues.

In the garage three Animal Services officers captured the snake, with a struggle. “It was approximately eight to 10 feet in length,” said Jenifer Porter, Orange County Animal Services Senior Officer. “When it should up it was taller than me.”

This move allowed Officer Kirsten Jones to secure the snake’s tail, at which point Officer Ledford was able to overtake him.

The snake was captured using snake tongs. “I attempted to put the snake in my snake box but it was too large to fit,” said Billy Ledford, Orange County Animal Services Officer. “I put the snake in a [cat] cage. I then put the contained snake in a secondary soft carrier that I had in the truck, double securing the snake.” Officer Ledford has extensive knowledge and experience handling exotic animals.

The owner’s wife, Valerie Kennedy, was then contacted and met up with the officers. She positively identified the snake as Elvis. The Florida Fish and Wildlife Conservation Commission also arrived and scanned the reptile for microchip identification to confirm and approve the return of the snake to the owner.

The officers returned to base at Animal Services shortly after the call was resolved, which at this point was close to midnight. It is rare for Animal Services officers to receive exotic animal calls as the majority of calls they handle involve dogs and cats. This was one shift the officers will certainly never forget.