The local veterans look back on a decade of co-dependence 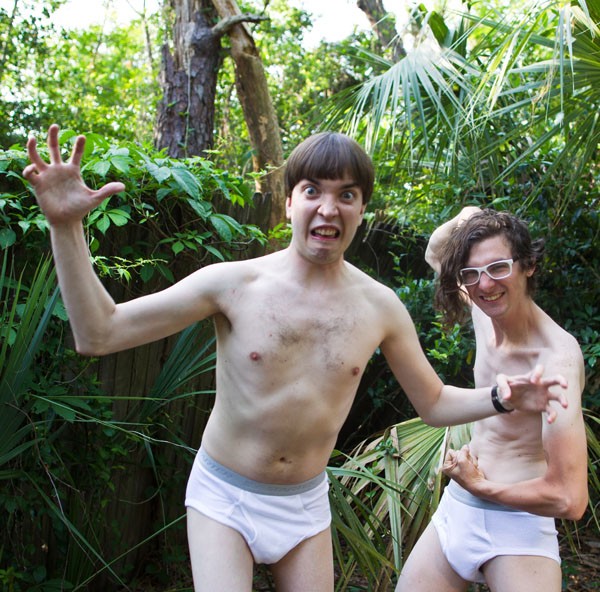 It's Tuesday evening in the Florida Hospital Orlando cafeteria. It's not the peaceful lakeside café strategically positioned to greet visitors coming in from the Kubrickian tunnel that connects the hospital to its parking garage, the one with baguettes and a spiral staircase and the promise of hope.

This cafe-teria is further down a ways and offers booths, fluorescents and ice cream by the pound. And silence, occasionally interrupted by the excited chatter of two unspeakably geeky suburban kids from Longwood lacking friends enough to start a proper band with actual instruments. There's Brian Esser, an artsy type with a jagged deadpan wit, jacked up on behavioral meds and prone to playing high-wire on the parking garage roof or hosting banana-eating contests that end, progressively and alarmingly sooner and sooner, with him vomiting blood. With him is his high-school lifeline, Jason Temple, angular, confidently withdrawn and still buzzing from hours spent with Esser at Rocky's Replay arcade, which they drove many miles out of their way to get to. This is their home base, complete with cheap burritos and empty late-night hours. It's where they wrote their first album within a month.

Only that was 10 years ago, almost exactly. Today, the cafeteria has smoothie machines, and you get there via the Walt Disney Hall of Inspiration. The table that Esser and Temple made music on is lorded over by an imposing antique clock and surrounded by TVs, all blaring Gwyneth Paltrow singing Adele. Esser, at least, doesn't mind.

"This is kind of weird," he says, interrupting a thought to take a long look around his old haunt's new trappings. "I like the TVs. It was so quiet in here before, I'd be really terrified to talk. But now there's TVs in people's faces. It was creepy quiet. It's like I've forgotten that we used to do this. Now it  feels so far away."

"Even though we live closer," laughs Temple, agreeing and needling at the same time. They do this a lot; but to compare them to an old, married couple would be too easy. There's something tumultuous about their rapport, a something that they pretend is nothing. The banana gorging, trainspotting party boys are gone, replaced by self-proclaimed "boring" musicians nearing 30 in terms of their constitution and back at square one in terms of their careers.

"I think I might be allergic to bananas," Esser says. "Unless you're getting paid to be an insane person, you probably shouldn't do that. It's funny, 'cause we felt like pussies back then, but we're so lame now that we look like we were badasses."

"Throwing applesauce at people for no reason at all," remembers Temple.

Within a few years of the two boys converging at the hospital and "sneaking CD-Rs onto the rack at Park Ave CDs," the duo, now going by Yip-Yip, emerged from a local wave of electronic, IDM and synth-based acts to take the lead as "big fish in a small pond." From 2004 to at least last year, Yip-Yip won the Orlando Weekly annual reader's poll for Best Electronic Act, released three albums for the California-based (now-defunct) SAF record label and toured the U.S. and Europe with electronic contemporaries like the Locust, thanks in part to the band's unique distortion of digital frequencies, in which they heavily layer blips, white noise and mechanical fuzz on top of one another - a kind of jarring soundscape emerges. From the channel-panning digitized speed-metal-in-a-blender of 2002's "Panda A: Persona" to the  stained-glass techno brawl of "Situation Tally" from Yip-Yip's 2006 album, In the Reptile House, there's no question that Esser's art-geek background and Temple's computer science set them apart.

And then there are the costumes, those famous checkerboard-alien suits that they claim allows them to truly let loose and put on a show. The masks also serve to cover their faces, a crucial factor for the admittedly anxiety-ridden duo. Those emotional walls started coming down in recent years, as Yip-Yip increasingly branched out with their costuming to allow for (gasp) looks at their faces. It turned out, audiences weren't ready to meet the real them.

"Our welcome is easily worn out," admits Esser, and somehow he delivers it with timing that practically demands a live studio audience. "That's why we're adding video to our performances now. I realize the problems with us as a live band; I know it's hard to make people enthusiastic about what we do. We're not that fun. We're not an all-night dance fest. We're playing synthesizers."

Under the judgmental clock on the wall, the two talk about missed opportunities and career peaks as if it's more fact than self-analysis. The thought of not going back to Europe haunts Esser, as does Yip-Yip's historically dismal album sales. They both wonder aloud whether they ever could sell a record, or if their unreleased masterpiece, Bone Up, should just be slapped on a free website with a tip jar next to it. It's a terrible time for anyone to try to sell records, let alone self-styled avant gardists with a track record of impenetrable musical themes.

"Put it out there and make a good T-shirt," Temple says.

That's an especially defeating thought considering how big a step Bone Up represents for the band. Having finally added vocals to the mix - mechanized, yes, but full of personality - Yip-Yip has never been more complex or accessible, more akin to their major influence: '80s synth experimentalists Devo. It's a celebratory album, informed by the duo's experience and uplifted by years of close-quarters creation.

"We've lived together for six or seven years," Esser says. "We live in a house together … until the end of the month."

What happens at the end of the month? According to Esser, a tectonic shift: Temple is moving in with his girlfriend and going back to school to study electrical  engineering.

"He doesn't think it's that big a deal,"  says Esser.

"The Weezer guy went back to school," shrugs Temple.

It's the elephant in the hospital cafeteria: In Esser's eyes, reality has just crashed down right at Yip-Yip's doorstep. Not that he's entirely blameless for the shift.

It's true. Although Esser's been engaged to his girlfriend of nearly six years for almost a full year now, it seems to have not occurred to him that living arrangements would have to be altered.

Temple does him one better: He suggests they start meeting at the cafeteria again, the way they did a decade back. It's enough  for now.

"The good thing is we keep having good ideas and we keep pushing things to other levels," Esser says. "I'm definitely not saying we missed our shot. I think we were just kind of pulled along for a ride; it's just luck, and hopefully we'll have more of it."